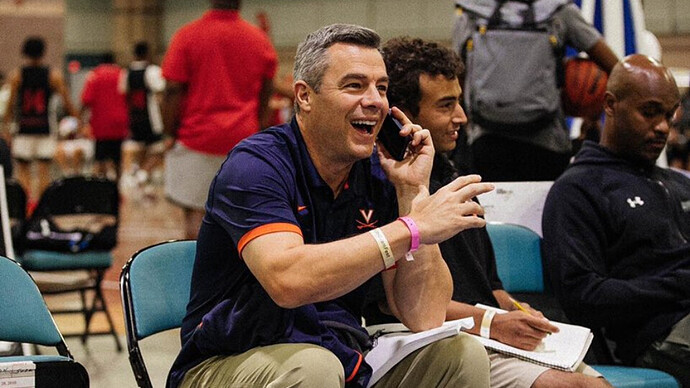 Tony Bennett showed shades of his usual formula, as well as a few new tricks In pulling in a monster class (good for 247 Sports’ eleventh overall nationally),

Not sure if anybody posted this somewhere, but just stumbled across it from October: Isaac Traudt is considered a sleeper to watch on ON3.

The best years of Tony’s tenure began when he *started with the above mentioned tough guys (other tough guys include Justin Anderson, Malcolm and Anthony Gill). He then sprinkled in *skilled guys in Ty Jerome, and Kyle Guy (although I would say they are mentally tough).

What Tony needs to get back to is to consistently have those tough guys as the staple, and sprinkle in the skilled guys. The toughest guy we may have next year is likely Leon Bond, but he can’t do *everything on the perimeter and be in the post.

They’ll have Kadin and Jaedyn next year as well. From what I’ve seen Gardner is not going pro after this year.

Shedrick and Beekman may well overlap with the 2022s for two years, which could be pretty fun. Imagining a starting lineup in 2023 of Reece, McKneely, Bond, Traudt, and Shedrick with London Johnson, Murray, Milicic, and Dunn rounding out the 8 man rotation is exciting (and yes, I know attrition could potentially interfere, but it’d be cool).

Reece will definitely be here 2 more years. He’s starting to fill out a little but needs to gain more weight and work on a semblance of a shot.

Kadin has a lot of upside for a big in the NBA honestly and the dude is freakishly long, but he may need 2 more years.

Yes you’re right about Kadin & Jayden Gardner as already being tough guys, along with Leon Bond ( I assume). I would still take 1 more athletic shot blocking, rebounding big- who *doesn’t have as much of an offense at the moment whom may develop over 4-5 years like Diakite. I know Mama-D was a 4 star, but I would settle for a 3 star who can do all of those things today!

I’d quibble a bit with what’s the sprinkle and what’s the base, but I agree with your overall point. But guys like Malc, Dre, Justin (Justin at times) transcended the distinction a bit.

Been thinking about Davion Mitchell after hearing some Baylor comparisons to Houston. Davion is the perfect mix of dog, athletic, tough, and skilled. I’d simply recruit guys like Davion Mitchell…

Yeah I would *love to get a 4 star recruit that is skilled AND tough, but alot of those guys are very difficult to get and it’s competitive. We have turned the corner in getting the skilled guys per our 2022 class- however they all have to put on weight, and “from the looks of it” are all finesse except Leon Bond. I think that atleast every 2 years we just need to pick up a rugged 4 year player that may need to develop offensively but already has the chops attitude wise defensively, rebounding wise and athletic wise.

What Tony can *try to sell them on is the offensive development (although in my mind we haven’t *really developed alot of players offensively that didn’t already have that ability), and of course being in the ACC and winning etc.

So if we have atleast one rugged player ever 2 years that stay for 4 then we regularly have 2 tough guys on the roster which should not scare away any of the talented players that we want to sprinkle in (McKneely, Traudt, and Dunn). If we begin to pick up talented players that are *also tough then the more power to that.

Ryan Dunn has full games up on youtube (Perkiomen Athletics). It doesn’t look like he’s playing a ton, to be honest. Though I haven’t watched but a few minutes of the two games up there. He’s not among the top 3-4 scorers on his team in either game (from the tweeted out top scorers). From the little I’ve watched, it seems like he hasn’t been that involved with his team’s offense but when he plays he’s pretty physically dominant at that level. Later this year, it looks like his team is playing bigger name HS teams (maybe Blair?) so hopefully we get a chance to see him against more interesting competition.

For what it’s worth, here are some recent videos from MaxPreps. I’m buying Ryan Dunn stock:

Check out Ryan Dunn's high school sports timeline including game updates while playing basketball at Perkiomen School from 2021 through this year.

Oh and one other thing about why I think that the tough guys are the base- is because we are at our core always a defensive team. As much as many of us want us to play faster, change the offense etc. etc. Tony has a comfort with things at a certain pace, but always predicated on the defense. So defensively if we start 1-2 athletic toughies we may not get run out of the building and can Embrace our pace and adjust offensively throughout the game.

Dumb question, but does that school play like “pre-season” type games to warm up for season? I find it a little difficult to believe that a senior who is about to go to a top tier ACC school isn’t in the starting line up for a high school squad.

Those are real games. He definitely starts, I didn’t mean to imply otherwise (though I realize saying “he doesn’t play a ton” kind of did that). It just seems that his coach is liberally substituting, since they quickly build yuge leads. I can’t find box scores, but just clicking through the games, it looks like he’s not playing more than 50% of the time.

Oh okay! I was worried too- but in other words he and their team are dominating. Got it

Got it! That makes more sense. I was about to start questioning some things, haha.