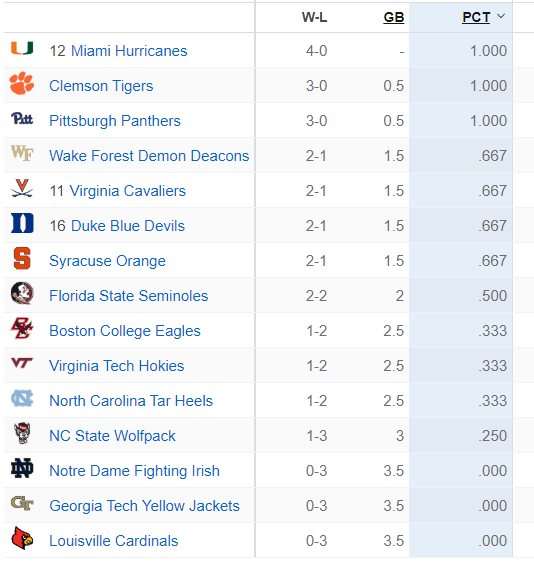 I’m surprised no one saw Miami being good… they went to elite 8 last year. They lost a lot but Wong came back and he’s their best player.

I think people would have Miami top 5 for sure. UNC went to the Finals and has everyone back so…

Edit: I just mean top 3 kinda surprising which is good Yeah Miami isn’t surprising to me, maybe exceeding expectations so far a bit. And when you really think about it Pittsburgh shouldn’t be a total shock either with all their super seniors.

Clemson is the biggest surprise to me. Their 3-0 isn’t against as good of comp as Pitt but they’ve won them all convincingly. Chase Hunter finally looking like the guy we recruited has been the key for them. And I totally missed Brevin Galloway transferring there from BC. He’s in his 6th season, and I mean actually playing in his 6th season. Must’ve gotten a medical redshirt approved for his first year after playing 7 games.

We’re a missed three from switching places with them, so…

UNC will be really good and Duke will not is my opinion. I also wonder about UNC with so much “come back for NIL money” going on. Whatever you think about NIL etc college kids arent made to deal with making some hundreds of thousands of dollars while playing

I think UNC is in for some trouble and that actually surprises me. I know they caught fire in the post season last year, but I thought they could ride some of that forward. But honestly the same problems that likely drove Roy out of the game are the ones that are plaguing them right now. Duke is fine. I mean it’s not the power team we expect but given the coaching shift they are in a good spot.

UNC is who i can’t figure out. I’ve only seen them play a few times but they seem to play great sometimes and then pitiful the other. It’s probably has to do a lot with their guards shooting. Love and Davis are shooting 28 and 30 % from 3 and they aren’t bashful about shooting

I see the ACC in 6 tiers right now.

Tier 1 (Favorites for the Reg Season Title)
Miami, UVA, Duke.
I could see any of these three winning the reg season title although I favor Miami or UVA at the moment. Also these three teams should easily make the NCAA tourney.
Tier 2 (Good enough to join tier 1, but a rung below right now)
UNC, Va Tech
Both teams already have 2 losses in the league, one would think 16-4 or 15-5 could win the league, which means they have little room for error the rest of the way. But they have the talent to do it. I also expect both to make the tournament.
Tier 3 (In position to be in position)
Pitt, Wake Forest
Both Pitt and Wake are dangerous. They are good enough to make the tournament but have some work to do to round out their resumes. I would be surprised if they end up in tier 1 but tier 2 is certainly possible. Both could make the tourney although I would expect at most 1 does.
Tier 4 (Not in bad shape, but work to do)
NC State, Clemson
Both these teams could get their resumes to be tourney worthy but both have issues. Most likely neither make the tourney unless they have a real hot streak.
Tier 5 (Dangerous but likely too much work to do to make the tourney)
Syracuse, Notre Dame
Both these teams could beat anyone on a given night or lose to anyone. Their resumes are not good and the sad fact is that even a gaudy record in the ACC might not be enough unless they rack up wins over tier 1.
Tier 6 (Looking forward to 23-24 season)
BC, FSU, GT, Louisville
No chance.

My power poll as of this moment based on what they have done so far, who they are currently, and who I expect them to be the rest of the season.

Right now I think 5-7 teams make the dance from the ACC.

It was the same thing last year with UNC— great sometimes, but several games where they look mediocre. Last year the great came during the NCAA tournament and every time they played us

And like last year, the difference is whether Davis and Love are throwing the ball away and chucking up bad shots.

Yea, they are capable of beating anyone or losing to anyone l.They got really hot in the tourney and run out of gas in the last half. Speaking of Love and Davis they will probably shoot about 60% against us

Good list. Largely agree. But I’d be shocked if the ACC gets more than 5 teams in the tourney. The Tier 3+ teams did very little in the noncon and the league is too weak to overcome that without almost running the table.

The NC SOS isnt great but wont be a disqualifier if they are close to the bubble. Outside the league they have a Q1 win @ Northwestern. We will see if it holds, may end up Q2. However, their only bad loss is on a neutral floor to VCU (NET 125). If VCU can get it into the top 100 it would be Q2.

So the NC performance is very bleh, not bad but not really good either. Thus they will likely have to post a pretty gaudy conf record 13-7 ish to be in the conversation with some more big scalps (like ours tonight) to be in the convo.

They actually may be in a little better shape than Pitt since they have a better NC SOS and their best NC win will likely hold up. But like Pitt, they likely need a pretty gaudy record in the league to be there at the end.

Resume wise NC State is in better shape than Clemson but I just dont think those two teams are as good as Pitt/Wake and thus I dont have confidence in them to do what they need to do in league play to legitimately be on the bubble come March.

Watching Syracuse at Louisville. My eyes are bleeding.

Not watching currently but

Justin Taylor streaky shooter and not the best defender but shows flashes? We do need a wing shooter if Taine doesn’t pan out. Chris Bunch (now Chris Bell) isn’t that impressive either

Benny Williams: No idea if he would buy in. Also no idea if he’s good or not.

Judah Mintz HGN already hinted at not being an option. But Heck id take 5th year Armaan over him. Judah not a strong 3pt shooter/takes a lot of long twos. Not really a pg either and not a great defender

On Louisville side, the only piece worth a damn is 2023 commit Kaleb Glenn lol