Wow…Michigan St. could only score 37 on Rutgers and lost by 30 after a 3 game pause. Michigan St. beat Rutgers by 23 just a few weeks earlier. So that is a 53 point differential between two games!? Could that be a record?

One thing I am really enjoying this year is watching many of the traditional basketball programs really struggle. Just a wild theory, but could all these disruptions in play due to covid be a benefit the programs with less talent? I was searching for a potential reason. Perhaps the traditional programs have more skilled players, but many times are younger with less experience. Could it be when you have a more experienced team, yet less talented, you can bounce back better and faster from pauses in your schedule? With experience you understand better your programs systems of play, you can shake the dust off from the pause faster. I have the thought that blue bloods have younger more talented players, but overall they probably have an average of less experience. Thus their systems of play could be less ingrained in their minds, And the traditional more talented basketball programs can not build on progress. Thoughts? 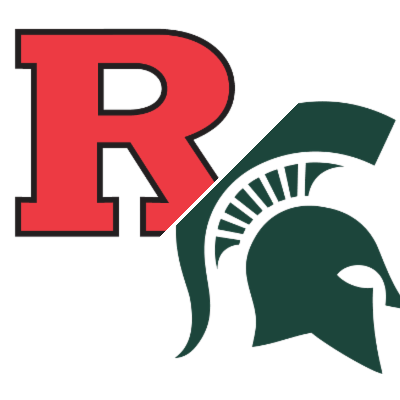 Get a summary of the Rutgers Scarlet Knights vs. Michigan State Spartans basketball game

All this shows me is when a team comes off a COVID pause, who knows what type of team will show up for the next few games. It’s been a crap shoot and has muddled the conversation for a lot of teams… UVa included.

@jazznutUVA Yes, I mean I do agree with that…All teams coming off a pause are going to be hurting to a certain degree, but I argue that it hurts blue bloods more…think about this. I heard that this is the first time since the 1960s that Duke, UNC, and Kentucky all at the same time were not ranked. Of course that could be complete coincidence that this rare ranking anomaly happens in this weird Covid season…But I think it is more than just coincidence…

@Daniel_G Yes… I see your point. I think it also has come down to the “Bluebloods” One-and-Done strategy. Without summer practices and a true pre-season, it has also muddled effectiveness of these teams trying to rely on 5-Star freshmen.

I think @jazznutUVA makes a great point. The impact on of COVID on Bluebloods is similar to most programs in they lost pre-season practice time, but it’s even more difficult when a team is replacing 30,40,75% of their production from the previous year. There’s a lot of moving parts for them to pull together. That line of thought can be seen to a degree in teams in the top 10, most returned solid cores from the previous season.

However, I would also argue, that there are not any true “surprises” in the top 10. Sure the teams aren’t the “blue bloods” but none of them are newcomers. Zags and Baylor were great last year, Nova Michigan Houston Iowa UVa all were expected to be good, and have shared recent success. I’ll give you Texas and Bama as being a bit out of nowhere.

Overall I think it’s safe to say that every program has had to face adversity due to COVID and any advantages from it are minimal at best.

No.
But I think that with high school seniors now starting to go straight to the G League, or play in foreign countries for a year, that some of the blue blood programs that were relying on bringing in one-and-dones have found that nationally, the talent level among incoming so-called “blue-chippers” was way down.

I’m saying that the high school All-Americans that Duke and Kentucky, for example, reloaded with (this year’s freshmen) aren’t good enough to reload with in one year now, the way that previous recruiting years for those schools have been.

Their one-and-done’s look more like 4-year college players. But that’s just my opinion.

Think that’s the case this year. Not only G League but also guys going to other programs. If Cunningham, Green, Kuminga, Suggs, and Mobley were spread among Duke and Kentucky they would probably be contenders. But Duke does have a monster class coming in next year and if Bates reclassifies MSU will be right back in the top 5 next year.

But, Duke doesn’t have the great college center that they used to get, which is good news for UVa. I know that Duke is going to get 2 of the top 3 high school seniors this year, but Paolo Banchero doesn’t look like a center to me.

I think he’ll still be great as a center. At least in college. Might’ve been a problem 10 years ago but with how the game is today it won’t be an issue.

I think @jazznutUVA makes a great point. The impact on of COVID on Bluebloods is similar to most programs in they lost pre-season practice time, but it’s even more difficult when a team is replacing 30,40,75% of their production from the previous year. There’s a lot of moving parts for them to pull together. That line of thought can be seen to a degree in teams in the top 10, most returned solid cores from the previous season.

However, I would also argue, that there are not any true “surprises” in the top 10. Sure the teams aren’t the “blue bloods” but none of them are newcomers. Zags and Baylor were great last year, Nova Michigan Houston Iowa UVa all were expected to be good, and have shared recent success. I’ll give you Texas and Bama as being a bit out of nowhere.

Overall I think it’s safe to say that every program has had to face adversity due to COVID and any advantages from it are minimal at best.

I think @BDragon is on-point here. Texas isn’t even that surprising in my opinion; they were very talented last year but young, and they got back like 96% of their minutes or something crazy-high for a team with so many highly-rated recruits. Alabama is a surprise to me, but Oats seems to be a pretty good coach based on what he was able to do at Buffalo.

What seems unusual is how poorly the perennial blue bloods have played so far with UNC, Duke, MSU, and UK out of the top 25 right now. I think the argument that the abbreviated preseason has hurt Duke and UK more because of their over-reliance on freshman every year is sound, but you could aslo argue that their freshman just aren’t as good as they usually are. Of all the struggling blue bloods, i like UNC’s chances of having a solid last half of the season the best-- they’ve got a sttong team identity (OR rebounding at a ridiculous 45% rate) that they’ve been sticking with and have won 6 of their last 7. I don’t think UNC’s 3 pt % will improve much, but improving their defense is doable and the next big step for them.

I agree about Tx, plus I always felt Shaka was a great coach. Put that together with the talent and mins you reference and they were due for a good season. Oats seems to be special in his own right. Toss in a weak SEC with Florida Auburn and UK taking steps back and it’s a pretty sweet spot for them to step up.

@unknown may be onto something about the blue bloods as well. I don’t think Duke’s freshmen are nearly as talented as what we’ve seen the past two seasons. There’s no lock No 1 or 2 picks on that team. UNC had a horrible year last year, in all honestly they probably aren’t too far off where they should be, and they have a lot of time left to right the ship down the stretch.

It’s certainly possible the talent level of this year’s blue blood enrolled five stars is less than what it’s been recently. But I think lackluster coaching, in combination with newness, is hitting certain programs harder than expected. Yes, there’s overlap in the freshman/newness venn diagram. And yes, rankings don’t always correlate to actual college performance. But I think the correlation is strong enough for this argument.

In Kentucky’s case, I’m not sure how to distribute blame. Is it the players? The cream of this year’s Lexington newbies is five top 40 recruits (including #5 and #8) and Wake transfer Olivier Sarr. Cal tampered (allegedly) with/just landed 2019 #31 Oscar Tshiebwe; last year’s #24 recruit remains on the roster. All of that (mostly) paper talent is 5-10 with a loss to horrible Notre Dame and a blowout to Georgia Tech. Is it Calipari? Cal may be more salesman than coach, but it does take some level of coaching chops to turn freshmen, no matter how skilled, into a team over the course of a season. Until this year Calipari’s been able to do it.

Duke’s a different story. The cream of this year’s Durham newbies is four top 40 recruits, and the roster includes last year’s #12 and #29. My personal school of thought is Coach K’s been mailing it in since he switched to the one-and-done model. Now that his ones aren’t good enough to be done, he’s got a problem. This year’s five stars aren’t as good as 2018’s, but that doesn’t excuse the 6-5, 4-3 record. I put this entirely on K, especially with the ACC down this year.

Newness affects UVA the way inexperienced one-and-done recruits affect other schools. Hauser, Murphy, and Beekman are extremely skilled players, but they’re newbies as far as executing Virginia’s schemes during games. Check out the Hoos’ performances against San Francisco, Kent State, and Gonzaga. Or don’t. Yeesh. But unlike Cal and K, our coaching staff has been putting in work. Quality coaching has turned things around – raise your hand if you think Virginia would absolutely boat race San Fran and K State if we played them now. And no way does Gonzo score 98. I’m chalking this up to coaching.

Has Covid played a part? I’d say yes to some degree. Lack of practice affects inexperienced teams the most. But if those teams are well-coached, they’ll show improvement over the course of a season. K and maybe Cal are no longer coaching. Bennet and Roy Williams (mentioned in a couple of posts above) are.

Did I mention I dont thing the Zags paused this summer…?

I don’t know what a blue-blood program is these days, because of the various rule changes caused by athletes standing up for their rights more. Whoever won last-season’s national championship game, THEY’RE the blue-blood.