Alright, so I think Elijah deserves his own thread. The intel thread will continue the Power meltdown (and rightfully so) once unofficial then official word comes out.

On Gertrude, HGN has said we’re heavy favorites and he likely wouldn’t visit again uncommitted. Here he is and we’ve go to close the deal (either publicly or to the staff) before he leaves Grounds today….unless we did before he arrived?..…Go Hoos and come on home Elijah

Yes, I think it is extremely likely.

I just hope he is willing to be patient and embrace the process that will be necessary to turn his raw athleticism into a complete player.

Seeing him sitting right in the middle of the team, next to Reece, in Scott makes me feel great about our chances. Already looks like he’s part of the team.

I don’t know how much football game atmosphere impacts hoops recruits (probably not much) but at least our competition here is Rutgers, St John’s & Seton Hall, and not Alabama, LSU or Ohio State.

This would be an incredible pickup. With him and Bond, we have that explosive athleticism and lockdown D that is key to us becoming a next level team.

With the odds of landing TJ heading south, I’d love to see us target the transfer portal for a sharpshooting PG (for depth mostly, even if he’s not a program changing talent that would scare off 2024s) and a front court player with skills like Hauser or Murphy. And hit 2024 hard starting with EG’s commitment - hopefully!

Is exactly why the visit was so important, I think. Rutgers, St Johns, Seton Hall around here basically the same place as Jersey City. Being down there in CVille with the players and students and football game etc is just very different. Guarantee he loved it all

Somebody sent me this from Facebook. Apologies if I’m ripping off your picture. 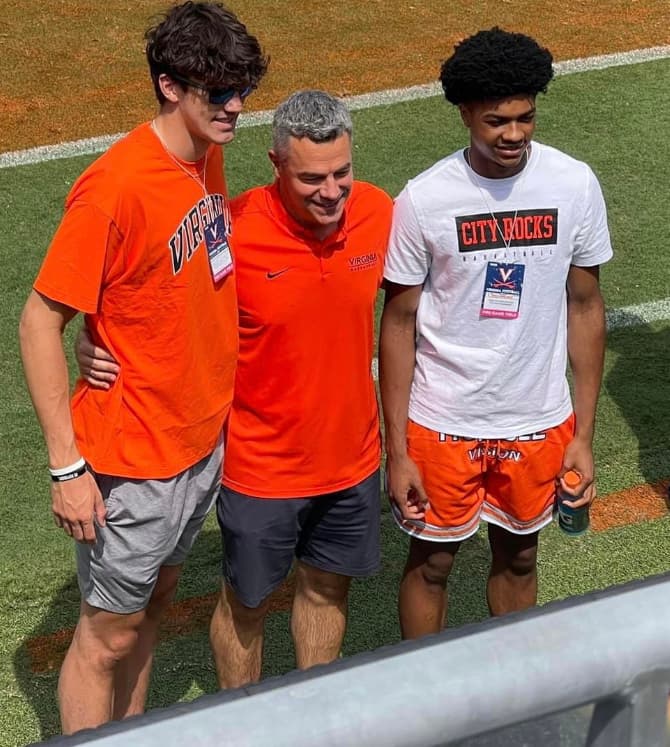 Oh no. Elijah doesn’t have his arm around CTB, no love. Lol

I think more on the skinny side but has a great frame. MC will love workin with him

That sure looks like a commit. If we’re going to hear something official, when would we expect that?

A couple words of caution here:

Being highly athletic does not necessarily translate into being a great defensive player. Lots of great athletes never become good defensive players. There’s a lot of “want to” that goes with being good on defense and there are skills that go beyond just being athletic. That being said, being athletic sure as hell helps a lot.

Let’s say this happens. That’s three wings we have on the roster who are not particularly great three point shooters and I hope by now everyone has figured out how important the ability to make three point shots is in Tony’s offensive scheme. We have to hope that one or two of the three develop a reliable three point shot. Yes, I know we have Isaac M and Isaac T, but we had Hauser and Murphy a few years ago and opposing teams locked down on them at the perimeter and ignored our guards’ outside shot and we know the results. Dunn, who was supposed to be the guy with the three point shot, doesn’t want to take one right now. Bond came in without that as being considered part of his arsenal but he has given a few signs that his shot is coming, so that is encouraging.

What we have are three guys who all could possibly be excellent players for us in time but “in time” is the key. I think the two Isaacs will be ready to contribute at a high level their second seasons, similar to Kyle and Ty. The question will be when Bond, Dunn, and Gertrude will be ready and what will they bring to the table? The possibility is they’ll bring a lot, but they have much work to do to get to that point.

I hope after this that the staff makes a reliable 3 point shot a requirement for any 2024 perimeter recruits.

I don’t expect any of the 3 to play a lot as 1st years so they have time to work on their shots. I am sure it is priority for each of them. If we don’t get another 23 G I think they will bring in 2 in 24 and it wouldn’t surprise me if they weren’t both good 3 pt shooters.

If he doesn’t this week it’s over No way, after this weekend, he goes on other visits and is still a Hoo.

Gertrude did garner defensive MVP in the KC EYBL sessions, even if that’s the equivalent of the Braves mascot stiff-arming peewee football players at the Mercedes Dome.