Assuming the core 6 all return and assuming they all play similar minutes as last year (I’m not assuming that, but will for the purpose of this post), next season will be a big test of the proposition that it’s minutes continuity in the Bennett system that is most determinative. Because last year’s core 6 was a fairly experienced bunch (2 seniors, 2 juniors (at least scholastically), 1 sophomore who started his frosh year).

Ali Ali would be a great pickup. A lot of people aren’t thrilled about “running it back” with pretty much the same roster, myself included, but next season’s team has a unique “redemption” opportunity of sorts which could make for a really fun season. Development from current guys, hopefully contributions from a couple 1st years, a guy like Ali Ali making us better defensively/3pt threat. If some or all of those things happen, it’ll be a nice season and will really reinvigorate the fanbase (and be a better send off for Kihei hopefully)

That was a nervous week or so for me. First time somebody said something like that, I shook it off. Then within a few days it was being echoed. You have to put it into context of the time. We’re talking early August. Igor looks great. Everybody believes he’s an immediate hit. There’s some frustration that Traudt isn’t committing as easily as hoped. And there was still time to switch attention to the couple athletic bigs they saw in July. Probably within a week of that, the ultimatum came down.

According to sports reference, our “core 6” played 86% of available minutes last year. Assuming that same core 6 is back, how much do expect them to play next year:

A little and a lot is up to your discretion to define. I’m voting a lot less. We shall see…

I just have to imagine that somebody outside of those 6 is better than Malachi + stattman and makes a run at minutes.

Ideally, we shift to this as a template for minutes distribution next year 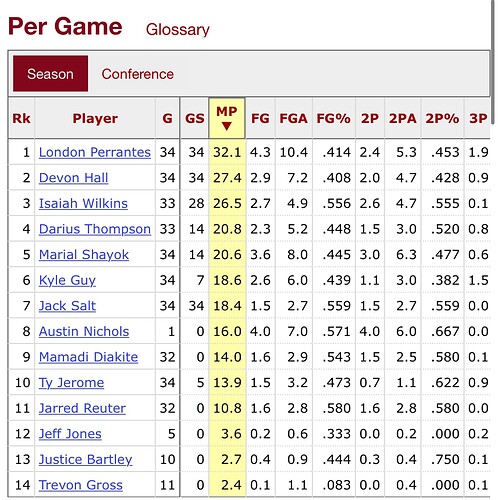 so 10 man rotation that year - but likely would have been 9 if Nichols had played all year - with Reuter and Diakite probably not playing much?

Kody not announcing yet

Win 25 games running back the 7 man lineup and then the entire first year class transfers out. Armaan, Gardner, and Kihei graduate and leave. The board would melt down

Laughing now - needed that. Thanks!

I think there are legitimate reasons to think the same core would do better next year - they’ll have more experience in our system and will be older. The issue I’m having is that a good chunk of this core’s issues aren’t ones that seem likely to change dramatically. Kihei and Jayden aren’t going to get taller and Reece and Kihei aren’t going to become quick-trigger jump shooters. Our main hopes for taking a significant step forward will be (1) Armaan shooting better, (2) Kadin becoming more consistent and Reece being more aggressive, and (3) one of the first years or Taine giving us some meaningful three point shooting.

If all three of those happen, that certainly elevates our ceiling to a solid, though nowhere close to elite, squad. But I don’t know that all three will happen. Will probably be a bumpy year, which I’m fine with as long as we make the tournament and some of the youngins get court time.

I think the biggest development that year (which has been echoed elsewhere) - talented first years (KG and Ty) were given shots even as DT and Shayok returned with experience. Would be a similar model to the Isaacs getting significant run this year.

Is there a good online database of which kids play on which AAU teams?

Of the players I mentioned in Indy this weekend

Under Armour at the Pacers Arena Schedule

I’m surprised not to see Xavier Booker on your list. Has the staff cooled on him? Is he not in action this weekend in Indy or Orlando?

Can’t say for sure they won’t be checking him out. I have heard there won’t be that many holdovers, more focused on getting ahead with stockrisers. Michigan State has been moving hard on him though.

He plays for an independent team, the G3 Stars, who is playing at a separate event also in Indy.