If Buchanan goes to Gonzaga, the possible alternatives on our radar

-Michael Nwoko
-Carey Booth (Tonys gotten to see him/at the same spots Power is up north)
-Make Luke Bamgboye can reclass to 2023 and redshirt? Would be dope to have a British Accent on the team.
-Nolan Winter, out with a rolled ankle.

Sure there are others. Regardless in 2023-2024 we are going to have Kadin and Traudt at the 5 so whatever big we get in 2023 aint playing right away/redshirting to develop anyways.

HGN tweeting that he got the Zaga offer this week. Did you know that when you posted earlier that the timing should mean good things for us?

Also Tahaad Pettiford is out with an injury. Elijah Gertrude gets to show if he’s a pg when Tony is front and center this weekend.

I think he answered another user with “I dont know” and then found out the same way through the instagram story? Just my guess though. EBC is what also showed his Iowa and Washington State offers originally. 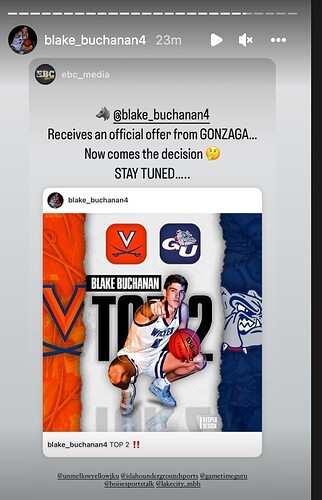 Oof. Yeah, I don’t feel as great about it knowing he has the offer in hand. Still like that he seems to be in decision mode on our timeline.

HGN, tell me where the feel good meter is pointing!

One of Buchanan’s coaches DMed me that he had a Gonzaga offer. Rumblings are good for UVA here. Not saying he’s committed or anything but this news is well received. I’m going 80/20 Hoos.

MY PROPHET SPEAKS. AND HE IS UNFLAPPABLE. Unless there is a funny story involved.

This is good news that he’s deciding now. If Gonzaga can swoop in at the 11th hour and get him, we never had a chance. So the best answer is yes, the next best is a quick no, and if that’s the case Tony doesn’t need to follow him around in July.

Even with Gonzaga offer I feel good, if not we have plenty of time to find a rim protector.

Would it be safe to say now that Gonzaga has offered, a decision could be made quickly? My guess is he got the offer from Gonzaga and even if they aren’t the choice, he can say he got it. Just kinda feels like this is gonna happen at least by the end of the June, if not this weekend.

As HGN says, kids dont put out top 2 or 3s without a decision being made or close to it. Before July 4 one way or the other

That’s what it seems. I did see when Houston Wilson interviewed Power, Buchanan liked the tweet including the article. That was several weeks ago though.

Loved me some Braxton to say the least so I’m good with that Phony. Bond already easy money on being my favorite Hoo from this class.

I checked the Gonzaga 247 board and they are a confident group. It’s funny, one poster believes UVa pressed Traudt to avoid a Gonzaga offer. Not quite how I remember it playing out.

Bossi seems to believe the offer muddies things for UVa but noted Buchanan has a strong bond with UVa.

I thought so at first. I’m not so sure now. I’ll go with HGN and what he says.

On a side note, I see the great Tugard is hearing Buchanan to Gonzaga from “his people.” Four weeks ago, he had no idea about the kid but now “his people” know.

What did Tugard call right lately?