Virginia picked up their first commitment in the 2023 class this week from big man Blake Buchanan. It came just in time, as coaches head out on Wednesday for the first of two always crucial July live periods.

Entering the Next Phase

The start of these July live periods is a big benchmark in the recruiting cycle. Coaches have two five-day weekends to attend AAU games, July 6-10 and 20-24. Everything else stops in the meantime. These two weekends are the last time coaches get to evaluate 2023 recruits, and essentially their last chance to decide whether to offer scholarships.

The landscape will have changed when the dust settles. There are always discoveries in July. We’ll see new recruits emerge, and some of the old ones will drift away. It might seem chaotic. Coaches will show up to recruit current targets, all the while evaluating and likely offering new scholarships to players for the same spot.

The thing to keep in mind is these new offers that go out in summer are typically to recruits who decide in the fall. By then, UVA will have already made their push in an attempt to close out the recruits that visited over the last couple months. The new recruits only interfere with the old ones if the coaching staff wants it that way.

2024 Recruiting will start to be a real thing this month too. We’ll see Bennett at more of those games. This is the time when they really make decisions about which rising juniors they’ll start off recruiting. They’ll still be following up on players this fall based on their play in July.

This first week, I expect Bennett to do more recruiting than evaluating. He’ll show up for established targets, probably all of them. There’s definitely a few scholarship offer decisions coming too. As usual, the major circuits sponsored by shoe companies are the center of activity.

The Adidas Championships will be held in Rock Hill, South Carolina this week. There’s a trio of Virginia guard recruits there. UVA is still squarely in the mix for Bishop Ireton (VA) wing Jamie Kaiser. It’ll be interesting to see how much attention he gets. Word of God (NC) guard Freddie Dilione has been the forgotten recruit. They’ll be back on his trail this weekend. And Totino-Grace (MN) guard Taison Chatman is fresh off a visit to Kansas. He’s still a remote possibility.

Isaiah Manning, a forward out of Texas, is one there that will get a look this month. He recently put out a top six, but his stock is rising with new offers coming in.

The Phenom Hoops event is conveniently nearby. I expect someone from UVA will make a stop there for Jarin Stevenson. The 2024 prized forward is still the only player in that class with a scholarship offer from the Hoos. He recently visited for the third time.

Fresh off his commitment, Blake Buchanan will lead his Hooptown Elite squad at the Under Armour Association event in Cartersville, Georgia. It’s a different setup there this week. His team usually competes in the Rise division, sort of Under Armour’s lower level. This week, they’ll play in the top division. It’s a step up in competition.

Nobody’s stock is climbing faster than South Kent (CT) point guard Elmarko Jackson. He’s probably Bennett’s top choice at that position right now, but the field is getting crowded. Michigan, Villanova, and Kansas are among his latest offers.

Rolling Meadows (IL) guard Cam Christie is still in the picture. He’s talked about wanting to visit in the fall. And Combine (NC) point guard Silas DeMary is going to get a closer look this week after impressing at Top 100 Camp.

While in Georgia, I expect Bennett to slip down to Atlanta to see one player in particular. Etowah (GA) point guard Brandon Rechsteiner will be at the HoopSeen Best of the South event there. He’s been piling up scholarship offers lately. UVA assistants watched him in June, but Bennett hasn’t yet.

The Elite 32 in Atlanta will be a popular destination for coaches too. Especially later in the weekend when some of the Under Armour teams play there after their event ends on Saturday. That includes Silas DeMary’s team.

The Nike EYBL session starts on Thursday in Kansas City. UVA is really turning up the heat on Pewaukee (WI) forward Milan Momcilovic as his recruitment nears the finish line. Iowa State hoped to have this over by now. Bennett clearly sees an opportunity. The other finalists probably do as well. We’ll be watching closely who shows up for him this week.

TJ Power is on the other side of that forward recruiting picture. Bennett has been pressing him hard and I doubt that changes, but TJ isn’t budging yet. Right now, it looks like MIlan will get first dibs if he wants it. Ohio State recently offered Power. They’ll be a factor along with Notre Dame and Indiana.

Only recently offered, Hudson Catholic (NJ) guard Elijah Gertrude has shot his way to the top of the UVA chart. The plan is for him to visit soon after these July live periods are over. In the meantime, we’ll have to hold on and hope he doesn’t blow sky high. He’ll be a popular attraction for coaches. Syracuse, Pitt, and Maryland are among his latest offers.

And keep an eye on Link Academy (MO) point guard Trey Green. Thai will be the first time UVA coaches have had the chance to see him in action since they picked up interest a couple months ago. He’s already put out a top seven list and is planning fall visits, but UVA has his attention and could factor into the race if they jump in with both feet.

Its a shame they couldn’t get Gertrude in for a visit between the periods.

I’m telling y’all, with absolutely no facts or information to back it up, my spidy senses are way up with Milan.

Exciting that we’re so well positioned with so many. Only bummer is we can’t get power to budge. Such a great fit. Obviously Tony sees Milan as more than just a shooter - or can develop where he’s currently lacking. Would be a great add Milan if Power waits too long. Only negative I can come up with on Power is that there is more redundancy with Traudt. As excited as we get about Power, we might not fully acknowledge what a potential star we have in Traudt.

Milan is just so tantalizing because he is money from anywhere on the floor. Imagine Reece dumps it down low to Milan, while Traudt is setting a screen for McKneely, the other team risks leaving Traudt or McKneely open for a pick and pop or a three off the screen, or if they cheat off Milan, he has no issue hitting those 15 foot turnaround jumpers. The interesting question is how good of a passer out of the double team can Milan become.

I also think, at least in his first year, Milan not being a crazy defender would be less of an issue when the roster would have 4th year Reece!!, redshirt 4th year Shedrick, and hopefully one of bond or Dunn ready to be lockdown defenders. Those three positions + hopefully a solid defensive 2-guard means we don’t need a switchblade defender at the 4. Just building on that, a lineup of Reece, McKneely, Dunn, Milan, Shedrick would be so much bigger than the last few years’ lineups that I think it would dwarf much of Milan’s own individual defensive shortcomings.

I’m not convinced Power doesn’t have a spot, even with a commitment from Milan.

Where would Manning fit in? I assume he’d only be an option if we miss on Milan and Power?

Yep Manning would be in place of Milan or Power

If you’re right I’ll probably hear the ISU cries of anguish from my house (35 miles from Ames).

I saw that yesterday. And mentioned UVa is in the mix. He almost made it sounds like MSU was more of a threat than UVa.

That was my interpretation

Pretty certain ISU mod is not that plugged in. This goes back to tracking his info on the BVP transfer and a few other things. The fact he continues to say he’s heard nothing new in weeks tells me a lot about his intel and our possible position.

One last thing on monitoring ISU. They have an insider on that board that seems to have better info than the mod. He’s been mum in forever. If he says something is positive or imminent w ISU I’d pay attention. Otherwise I am keeping my feels

Let’s be real, staffs are talking to MM and his camp, doing Zooms, 3rd party contacts (I see you Justin Anderson) etc. info is out there it’s just not being conveyed or reported. Gee, what staff do you all know of that likes to do these thing’s stealthy down the stretch….

All that to say today/tonight will be fascinating to see who CTB pops up for, MM or Powers. Though both being in KC I guess he gets both but if their games overlap…

Great stuff as always. Thanks so much.

While it seems like we’re in a first-through-the-tape situation with MM and Power, the guard situation seems pretty wide open, or as you note, may even seem “chaotic” as some of the new offers start to drop. But what seems strange to me is how the 23 cycle seems to be heavier on off guards than point guards.

I know this has been debated a good deal here, but I can’t quite grasp the strategy yet. Do you have the sense that Tony sees a point guard as more of a 24 priority, but is happy to take one in 23 if he can get one? Or is this a real priority in 23, but he feels that some of the combo guards can develop into PGs?

Thanks again. These reports are always great for clarifying in my old and addled brain just where we are with H&T’s fantasy rosters. 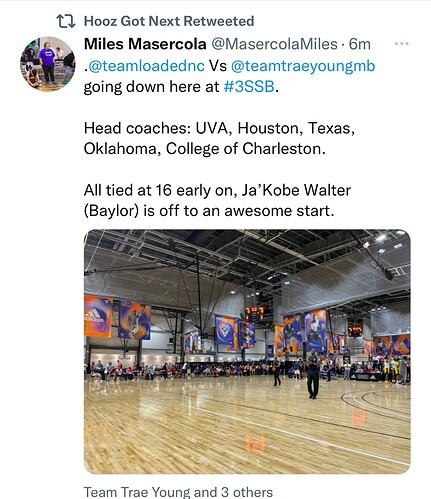 Any other big timers in here or are these guys lining up for Dilione?

I really don’t know…Houston and Texas are recruiting Dilione. Schedule set up right for TB to start off there. Kaiser plays in the last game of the day. Expect that’ll be it for Adidas and off to Georgia tomorrow.

Interesting so not starting in KC. Saturday I assume?

Everybody will finish in KC. The others end earlier and plus they’re tournament formats so you don’t really know when your guys will be playing after tomorrow.

Been the bad side of Dilione in the 2nd half. Lots of wild shots. Serms a little frustrated.