Very cool story. Thank you for the kind words. I lived in Galway for a bit. One of my favorite cities in the world

@BDragon Im impressed with your hometown loyalty since your actually an Xavier Alumn. And job well done on converting the wife! Im still working on my girlfriend, but shes just not into sports. Interesting life story Dragon. Glad your a UVA fan. I always look forward to your thoughts.

I was wondering if you were in a similar time zone as me based on the times you post when I’m awake in the morning here in Ireland.

Well, I’m sure you all remember the euphoric feeling from that night — beating a higher ranked Syracuse team to clinch an outright ACC regular season championship for the first time since 1981

The 2013-2014 season was also when I started follow more consistently. I actually remember this game and being so happy that we accomplish such a goal. I think that year was a very special one for the program and UVA fans.

I find it difficult to explain my love for UVA basketball to people outside of UVA because so much of it grew out of something that is very specific to who Tony Bennett is, who he has brought into the program, and how he has impacted those who are involved with or who follow the program.

For me this is exactly what makes our program so special. We love basketball and we love the thrill of the competition, but Bennett brings something extra to the court for us to love that lots of other programs really do not have.

Thanks it wasn’t hard to maintain my fandom. Growing up in ACC country and then going to the A10 it wasn’t even a comparison. My hear was always with the Hoos. I think CTB converted my wife to a fan. She enjoys sports well enough but his personality and approach struck something for her similar to what others have me mentioned

Tony Bennett is such a great human being. He’s genuine and wholesome.

Just getting started reading these…Wow awesome stuff Daniel! He had shared some of it to me before but very cool hearing the more detailed version. You have an interesting life dude!

I’ve heard a lot of the “how I became a UVA fan” stories since I’ve been doing this. His last paragraph is a common theme for most of the newer fans.

Some great memories. Always been a recruiting nut, religiously reading The Poop Sheet and Bob Gibbons newsletters back in the day. In 1994 in the early days of the Internet dabbled for a short time with website called Orange and Blue and even wrote a couple of recruiting interviews

While at X I picked up rugby and became a very good player eventually traveling overseas to play for several years before returning to the states and continuing to play for a 17 year career.

These are awesome. Who had the Dragon as having the longest sports career on LRA?

Not surprised at all. Dragon obviously all in for all sports playing, coaching and supporting. Always remember his initial post saying he is a UVa “townie”. Great contributor here

@DFresh11 do you mind sharing how you got interested in UVa and wanted to come here? That process sounds pretty interesting

I will for sure B. Just been waiting to formulate my story is all

Thanks. I am a sports fanatic. Have been aimce I was 5. I love the lessons we learn from competing and I love the thrill of coaching and teaching.

Me being a townie is why i ended up deciding not to arrend UVa despite it being my favorite school. Too close to home and knew too many people there.

Really looking forward to hearing your story. Love the insights and stories you bring. 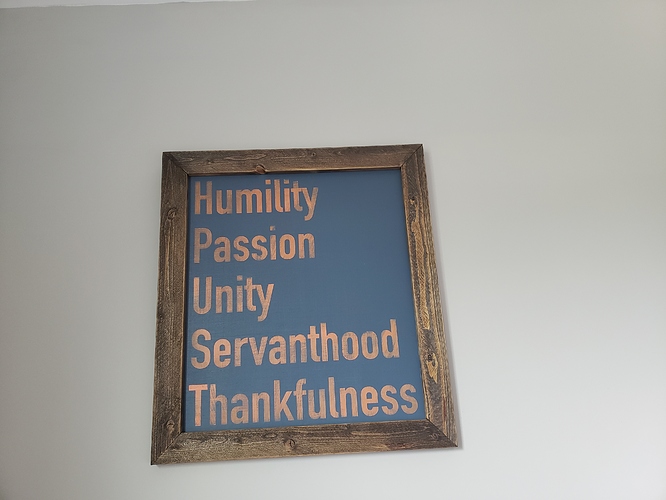 The CTB influence in my office

appreciate it man. and thank everyone here. literally the only thing I do online is LRA and this site has it figured out

My personal story isn’t all that unique or interesting. I grew up in a rural part of the state, the son of a sports obsessed dad. It was the 80s in ACC country. College basketball was king. We went to a lot of games. I attended the summer camp every year. Being a UVA fan was in my DNA. I was a pretty average high school player. Wound up going to a small college on a football scholarship. That always surprises people who know me now because I’m not much of a football fan.

I still call Virginia home, in the Roanoke area now. But I spend most of the work week away. Which fits nicely with having an obsessive interest to occupy evenings…

The cliff notes version of how I became this HGN thing is that I fell ass backwards into it. Like the typical hardcore fan usually does, I eventually started following recruiting. At first with subscriptions to the usual websites. While our UVA affiliated sites do a great job providing the information most fans want, I wanted more. I wanted to understand the hows and whys.

So going back 7-8 years ago, I noticed more and more people posting tweets on forums. Breaking news, Virginia has offered 2014 so and so. Finally I had a reason to join social media. I created a bogus twitter account to follow basketball recruiting, nothing else. No tweets, just quietly followed…and learned. It became sort of my evening reading. My first realization was that I didn’t know much…like at all.

That went on for a few years. Over time, my purpose changed. I wasn’t just trying to figure Virginia’s recruiting out anymore. I knew to do that, I had to understand the big picture better. So that was my focus. Somewhere along the way, I got to the point of being comfortable speaking the language. I started talking to people. Not trying to get information, just having conversations. Some of those early twitter friends still today provide me with tips, and now I can sometimes help them as well.

In April 2016, I was following the live period on twitter as I had done annually. On a total whim, I started a new account called Hoos Got Next. It was frozen within hours for some reason. So I opened another with the now familiar Hooz. Accidental branding as it would turn out. The only purpose was maybe to find a few like-minded UVA fans. Within a few tweets, Cavalier Blue found me and reweeted. You should all be following him obviously. lol It took off from there.

The next year, i started a Facebook page just to have a place to write short updates to post on twitter. That took on a life of its own quickly. I wasn’t comfortable with it at first. I’m not much of a writer. Having a bunch of UVA grads reading my posts was sort of intimidating. That’s where things went next level though. People realized I had occasional insights beyond just gathering someone else’s tweets. It gave me a credibility that opened new doors and snowballed into more cooperation. Eventually landing me here!

@HoozGotNext did you go to the Graves Mountain camp or camp in Cville? I went to Graves for 4 or 5 years. It was awesome.