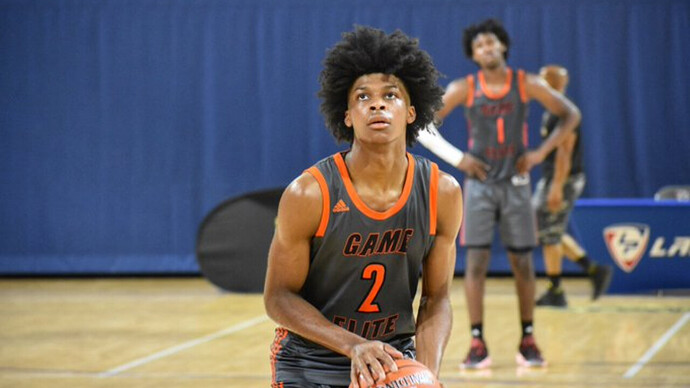 One of the hottest recruits in the country, five-star point guard London Johnson discusses his weekend visit to Virginia.

Virginia hosted 2023 Norcross (GA) point guard London Johnson on an unofficial visit over the weekend. While there, he received a new scholarship offer from Head Coach Tony Bennett. Rated as a five-star prospect by Rivals, Johnson is one of the hottest recruits in the country. After this past weekend, Virginia is firmly in the race. I caught up with him to talk about his visit to Charlottesville.

“My visit to UVA was special,” said Johnson. He spent the full weekend in town, arriving on Friday night and staying through Sunday afternoon for the Blue-White scrimmage. Joined by his father and an AAU coach, they had the chance to watch practice on Saturday before seeing the beatdown of Duke at Scott Stadium, and then of course Sunday’s scrimmage.

“Practice was intense, with a focus on player development. Which I like,” A clearly impressed Johnson explained. “Coach Bennett’s emphasis on character on and off the court was evident in the way his players responded to him with respect, and the way he held them accountable while treating his players with dignity.”

It was the culture of the UVA program that seemed to stand out most to the elite guard, as he noticed the five pillars in action.

“Coach Bennett has established a winning culture based on player development and character. His five pillars of humility, passion, unity, servanthood, and thankfulness were on display throughout my visit. From coaches, players, to team managers, and grad assistants. Everyone has a ‘service-first’ attitude, which is humbling.”

As we’ve gotten used to in recent years, Tony Bennett doesn’t extend many early scholarship offers. London Johnson is the only true point guard in the class with an offer. They need someone that can be trusted to take over the floor general role early in their career. It’s a crucial spot for the program, but also a golden opportunity for the right recruit.

A big guard at 6’4 who always seems to play under control, Johnson possesses a lot of the qualities Bennett looks for in a guard.

“He likes the pace I play with,” London said. “Also the way I can read defenses, and make plays off ball screens.”

Johnson’s recruiting stock surged after a big summer playing for Game Elite on the Adidas circuit. The offers have only continued to pour in as coaches have stopped by Norcross for Fall workouts. He’s up to nearly 30 offers including North Carolina, Louisville, Indiana, Tennessee, and Southern Cal.

He’s actually a Charlotte native, having moved to Atlanta last year. Growing up in North Carolina, the ACC might carry extra appeal, Johnson explained. “I grew up watching Duke and Carolina against schools like Virginia. It’s really cool now to have the opportunity to play in the ACC.”

It looks to be a wide open recruitment right now. North Carolina was seen by some as the favorite, but the recent addition of five-star guard Simeon Wilcher could complicate their pursuit. There’s a really good opportunity for UVA here.

Where It Goes From Here

It’s still early in the process for Johnson. He’s taking an active approach though, learning about all his options. Just in the last week or so, he’s taken four visits to Memphis, NC State, Wake Forest, along with Virginia. Another step forward will come soon, as he plans to trim his long list of offers down to a Top 12.

When it does come time to make a college choice, Johnson already knows what he’s looking for.

“It’s important to choose a program based on integrity, that highlights my style of play, and where I can come in and make an impact on day one.”

Well that doesn’t suck. Great stuff HGN. You hate to read much into comments of 15-16 year olds, but man he screams a Tony kid.

Can see what he means by Tony loving his pace of play after watching his highlights. Really like this kid!

Yes. Very under control and smooth. Reminds me some of Cory

I think Johnson may commit somewhere prior to Sheppard. Thoughts?

Would be great to get them here together for the ND game.

I like this kid a lot. He’s very mature, serious about the game and putting in the work. He and his dad definitely get UVA and Bennett. My only concern like most of these kids that are heavily recruited early, I don’[t know if they’re thinking long term. The good thing UVA has going is despite the reputation of players waiting their turn, PGs under Bennett have all played a lot as freshmen. Having a clear starting spot in year 2 is big. Otherwise, I don’t know if they’d have a chance here.

Wasn’t Cory more off an of the ball guard, more so then a pass first guard?

Oh yes 100%. I mean LJ is controlled and kinda smooth the way C was (and still is). From this clip I think C was more explosive though. Or maybe that was my persoective going against him everyday for almost 3 years!

Guessing you saw a lot of his backside, CA that is…
Jk Fresh

He’s right in that range where it’s unclear if he’s a one and done or a 2-3 year player. I do think it’s a situation that fell right into our laps. Duke and UNC already got their lead guards for the class and he’s a top 30 talent that fits in with our culture and play style. Just need Tony to finished the job with a good ole “Do you know who I am?” to seal the deal.

man A LOT. or his shoes in my face

6-4 165. Seems like he would need at least a couple years with Mike Curtis to get his body ready for the NBA.

He’s two years away from starting college. Also Mike Curtis can do a lot in one summer. He weighs more than half of these lanky 7 fters the nba is taking these days

“My visit to UVA was special” His words