Looking Ahead to Next Season

Blog post. But might as well start this thread topic anyway. Bound be a subject of convo in the weeks ahead. 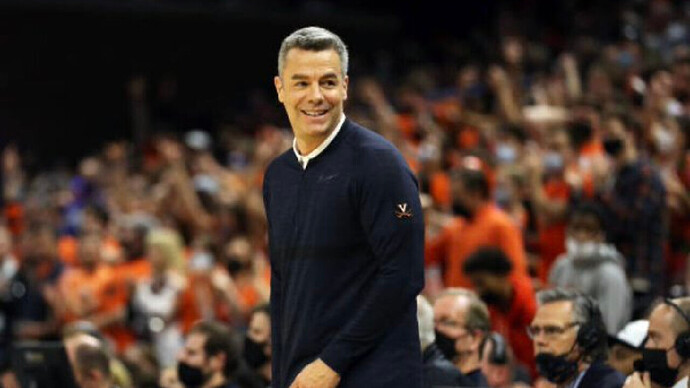 Looking Ahead To Next Season, The Good And Not So Good for UVA - Locker Room...

Each season changes expectations for the next one. The good, not so good, and voids to fill for UVA in 2022-23.

Is there a reason you didn’t mention Traudt? Are you assuming he’ll have limited impact next year?

In general, I think it’s a lot to ask for the type of freshmen we get to contribute year 1 (and if they do, it’s a bonus) but feels like he deserves a mention…

No he just didn’t fit into what I was talking about. More about the season of current players relate to next season. Traudt will play.

Edit: After 3 people mentioning that I’m gonna throw his name in there somewhere LOL

This all seems very fair and well considered. The note about Miličić or Murray potentially transferring - while I realize you are likely not hinting at anything specific and just generally commenting on how anyone can transfer - does make me sad. Of course, we all know it’s a possibility, it’d just be frustrating. It’s been debated on LRA to the point that the dead horse has been beaten into a fine powder, but it is really too bad they didn’t manage to snag consistent rotation minutes. I genuinely thought one of them would.

“But neither were able to establish themselves in the rotation once conference play started.”

“ It’s a tough adjustment for freshmen coming from overseas, much less to play for Tony Bennett.”

“[Lack of athletic combo forward when playing small ball is] a tricky situation for them to address in terms of roster management.”

“ For me, the biggest lesson of this season was that experience in Bennett’s system is part of the system.”

Basically, I still think this roster is more of a tear down than a fixer upper. Build around Reece and Shed, everything else is up for grabs over the summer, in official practice, and through the noncon.

at the same time, i think we all KNOW Tony didn’t promise them minutes and probably had conversations that were like “we think you have a ton of potential, likely will take a year or two to learn the system and get used to college basketball, so don’t think you’re coming in to get consistent minutes in year one”.

I also understand that whatever was said, they both sat on the bench watching us frequently struggle on offense and probably thought “let me get in an get buckets”. So i see both sides, but hopefully Tony will reiterate his initial message to them and show all the examples of how waiting has worked out for us (Dre, Devon Hall, etc.)

show all the examples

You’ve got a typo here. Extra “s”. There is only one (guard/wing) example. For me, the lesson on Dre was that he was clearly good enough to contribute the year he was redshirting (as Tony himself has admitted) and therefore should’ve been playing.

i think Devon Hall is a good example. he maxed out his abilities by his last year (his NCAAT showing notwithstanding). you’re right that Dre is maybe even a “bad” example.

Is there any chance a lineup with Jayden, Traudt and Kadin/Papi can work? Basically let Traudt play the 3 on offense and Jayden the 3 on defense is my idea. Thought Jayden showed he might be able to do it on the defensive end by the end of this year.

I’m all for ideas that get another shooter out there. It’s sort of an intriguing idea because you could (theoretically) play the mismatch depending on how teams guard it. If you put a little on Traudt, he can post up. If a big, then he can shoot (problem with the former is a cluttered lane, plus we generally don’t go after mismatches).

I think it’s an interesting idea, and it’s worth a shot, but my general view is that would mean a more cluttered lane and we’d lose some quicks in our perimeter D. Though Traudt’s defense is a wildcard, at least for me, at this point.

Jayden was a 3rd team all-ACC, led the team in scoring in and rebounding on 50% shooting, and vastly improved on defense by the end of the regular season. So I’m one of the many you cite who wouldn’t consider him to be a “gap filer,” and I’m glad he’ll likely be back next season. Also glad that Franklin will be back too, as we will need his veteran presence, and, who knows, maybe he’ll have a great senior year like several other players under Tony have had. With improvement from the returning starters and good contributions from 1st and 2nd year players, I can easily see a much improved team next year. But I’m admittedly a very Pollyannaish-type fan, who figures the playing time worked out the way it did this season because Tony went with who he felt was ready during ACC play and knows better than I do.

So I’m one of the many you cite who wouldn’t consider him to be a “gap filer,”

Like I said, I realize I’m on an island with my Jayden position. I think more might agree on Armaan. All the returners will improve if given more PT, my questions are just (1) how much, and (2) at what cost?

Another way of looking at it: we need to be good at three-point shooting to be good. Jayden and Armaan take up two slots (2/4) from which teams can expect/hope for good 3-pt shooting. They are either bad shooters or non shooters. Our 1 is mostly a non-shooter. Our 5 is a non-shooter. So that leaves one slot for a shooter… (or as I said in my original post – let the plan be “hope”)

I still see Franklin and Jayden as gap fillers. I don’t see them as foundational parts of our next big run.

I agree with you that they won’t be part of our next run (maybe a 5th year Franklin, but I doubt he sticks around for that).

It comes down to the philosophical question of what are Coach Bennett’s and the team’s goals? Is it championships or bust? Unless you have a team capable of a championship run, develop for the future at the expense of wins today? Is it do as well as you possibly can this season and worry about next season later? Is it concentrate only on winning the next game in front of you?

If it’s championships or bust, why play Perrentes so much in 17? That team certainly had a ceiling. Key/Diakite in 20 and Huff/Hauser in 21? Anyone paying attention could see how flawed both of those teams were. I’m intentionally not going to talk about Clark here.

Maybe in college, trying to win every game and doing the best your team can do each season is the goal. Every team changes from season to season and maybe the guys want to enjoy it with the guys they play with, live with and spend most of their time with. Each season has a different group of guys with different relationships and chemistry.

Playing for next year or 2 years from now sounds like a plan, but is that fair to the guys who won’t be on those teams? They put in their time and earned PT too. Do you maintain the trust of your players if you sit them when it’s their turn? Especially if you’ve been selling them on the idea that they’re not seeing the floor now, but if they work hard and improve, they’ll be in a position to earn time after senior X graduates. Then they see some Freshman who didn’t have to go through what they did see court time at their expense. I’m pretty sure I wouldn’t want to play for that coach.

This idea works in the NBA. Guys in the league are paid and know the deal. The stars you’re developing and building around will be on the next good team and role players are more fungible. I don’t think you’ll get a lot of buy-in in college though.

Good response, and there’s a lot of food for thought here. I won’t spill too much virtual ink, except to note that it’s all a balance. And this year, we seemed to put the balance too much on a near-sighted approach, and I generally think Tony has struck a better balance in the past, and I hope he strikes a better balance in the future than 4 returning starters next year would imply.

Can see why you have this opinion but this is a very debatable one in Armaan’s case. We can qualify it all we want but he shot 40%+ on 4 attempts per game in the Big Ten. If he can do it one season the potential to do it again is there. Even if he splits the difference between last year and this year that’s a guy who can contribute to 3 point shooting as long as he isn’t THE guy being relied on for it.

I think he will be better if he gets to shoot more on the move and if he is playing next to a good volume shooter. I’m still a bit skeptical as to the ceiling (or likely outcome), but I’d be happy to be wrong.

I guess it depends on your definition of ‘good’ as well. I will be surprised if Armaan doesn’t shoot 33%+ next year. Which is good enough to be efficient and open space for others. But I will also be surprised if he gets to that 38%+ range to actually be a dangerous shooter.

A lot to chew on here, but my zoomed-out take is that when it comes to looking at how the team needs to improve next year, we are all not talking enough about the defense compared to the offense, given how the team has performed this year. Specifically, how will this team rebound better next year? I am optimistic on that, as the rotation has a chance at getting a little bigger and more athletic next year, but that’s the biggest hole on this team in my view.

I hope he does! He has the tools to be a good shooter!