Whoever has the most correct will win a free shirt.
Enter names by replying here. Twitter and IG posts don’t count! 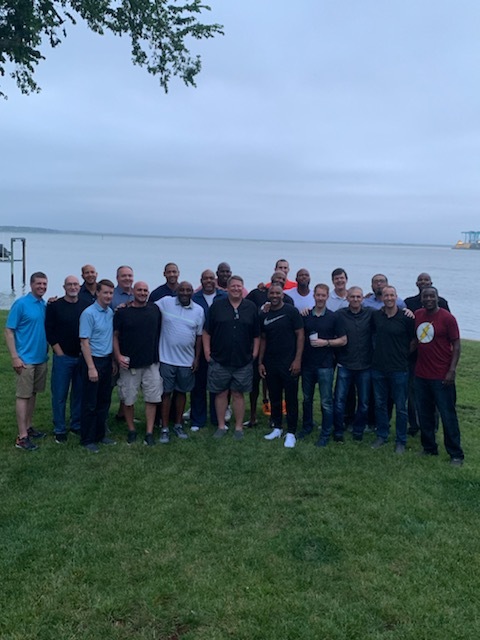 Lets put this one to bed. From left to right and bottom to top. Jeff (manager early 90s and huge part of team), Dennis Wolffe assistant coach who was great with the guys and total character, Kenny Turner all time great UVa guy who gave it to everyone. Kieran who worked with JJ at UVa then American and ODU, Dan Merrifield OG who played with JJ and Ralph, Doug Smith number 11, Junior Burrough my all time favorite teammate, Brian Ellerbe assistant then as well who had game long after he left college. Bryant Stith there is only one, Ted Jeffries all time UVa scholar athlete alumni and brother No one I know had had more influence among UVa people. Jeff Jones the host and loyalist coach there is (after you play for him), Cory Alexander I think he could still play today and best memory/ story teller on the team, Jamal Robinson who is all our little brother, came in and made his mark, Colin Ducharme one of the real guys in UVa hoop history in every way, Norm Nolan only regret is we never played on same team, Pete Mac dude surprised everyone with great career, Gates just an all time name and UVa guy with great old school stories on teammates, Jason Williford National Champion, Greg Lyons who is top 5 UVa guy for me. Anthony Oliver maybe the best human being to ever put the jersey on and my brother, behind AO is Cornell Parker who was ultimate competition guy who took a defensive challenge personally and loves his guys.

Well, we all know who won… competition over.

Ha. no I had inside info and was there. other replies were pretty good though