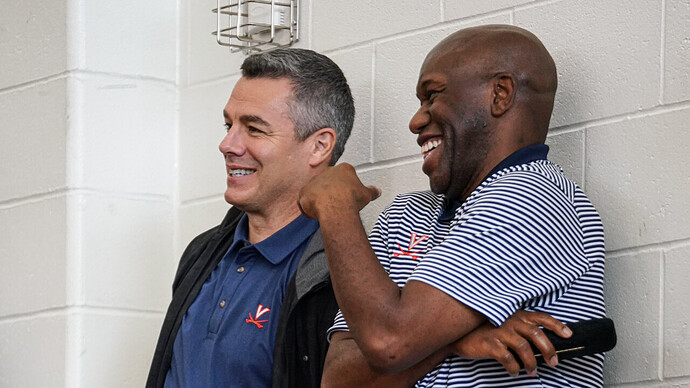 The Virginia coaching staff took to the road this weekend for the first of two spring evaluation periods to identify new targets in the class of 2023.

fixed it for you.

Milan and RJ Jones played against eachother. Milan didn’t have a single bad game this weekend. Have to figure the only hold up from a UVA offer is if Tony is ready to commit to taking two bigs this class since we need that Mamadi big first.

Also can we shout out the coaching staff and especially Kyle Getter on their scouting?

Stalking twitter the last year building up to this spring/summer ball, literally the two players Kyle Getter had been most active with on social media with were Zayden High and Milan Momcilovic. Milan I knew from last summer but I was like “who tf is this zayden high fella”. Both of them were probably the best performers at the Nike event outside Robert DIllingham lol.

Of course both are going to explode but Getter working those relationships the last few months has to payoff somehow.

I feel like UVA has always been on top in terms of scouting top prospects. Just need to start landing them and the 2022 class is the beginning.

Any idea if Felton is related to Raymond Felton? Welp Hubert will enjoy having him

Lol there are like 20 north carolina kids in the top 50 they can’t get them all. Doesn’t seem to be a priority in their 2024 recruiting.

How is Milan not redundant to Traudt? Same guy, no?

We are gearing away from true centers and recruiting moreso to 5 out offensive system.

Well that and he’s a sniper from a funny sounding town in Wisconsin. And Tony Bennett just don’t pass on those haha

Dude it’s April 2022 lol I doubt Hubert knows who his 2024 priorities are yet. If they want him they’ll get him

That’s fair. Doesn’t seem to be on their top prospect radar though, according to their recruiting activity or their mods over at UNC (there are 5 2024 names they seem to be focused on early so far: Paul McNeil, Jarin Stevenson, Isaiah Evans, Drake Powell, and Cam Scott). Jahseem is a borderline top 50 recruit (53) so not a priority for them at the moment/they will probably want a top 25 pg prospect which they can pitch with Cole Anthony, Coby White, Simeon Wilcher, Caleb Love, etc.

I would take a contrarian view on true 5’s. I’d take them all day long. They are unlikely to leave early unless they have 3 ball range. We all saw how valuable a guy like Bacot or McCormack is in college. They aren’t as heavily recruited as they once were so there’s a positive dynamic of value relative to your chances of landing them.

Those are both great points. I just don’t think those traditional bigs hold much value. Our national title front court were Hunter and Mamadi. And if we had that Sam Hauser and Jay Huff front court Bacot becomes unplayable because of his inability to guard on the perimeter and him being out of place on defense leading to foul trouble for him trying to make defensive plays one or two steps behind.

Hmm, Bacot would be unplayable, huh? I beg to differ. 1st team all ACC. And what about McCormack? Sit him too?

Yeah its how Duke won the first match up vs UNC in a blowout, exploited Paolo being defended by Bacot drawing him to the perimeter. Of course they adjusted with Leaky black on Paolo. How Villanova beat Michigan and Hunter Dickerson as well. And how Bacot had been a non factor vs Mamadi, Huff, and even Hauser. And if Justin Moore was healthy they woulda beaten Kansas too with no one taller than 6’7 on the floor (dixon is 6’6 screw his 6’8 listing lol).

When we have the players Tony wants, those bigs will be obsolete.

Iowa mod mentioned UVa being in heavily for sandfort

I would switch your Uthoff comparison. He started next to 7’1” Adam Woodbury. He played a little at the 5 his senior year, but I’d classify him as more of a 3-4 hybrid.