I know people on here know more than they can share and I appreciate that. But what is a high-level “unclassified” summary of what’s going on with Ty and OKC? Contract dispute? Playing time concerns? Just curious. With all the best for him and hope he finds a great home in the NBA. 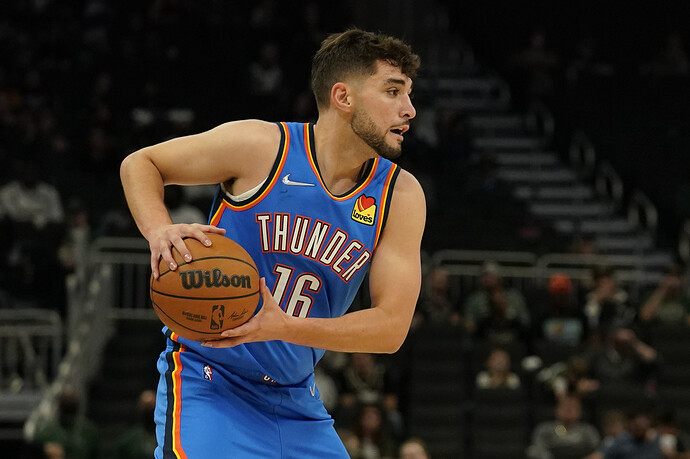 Report: Ty Jerome not with the team as Training Camp starts

The Oklahoma City Thunder held their annual preseason media day on Monday Morning, with training camp opening up on Tuesday. The team sits at a max capacit...

His shooting never came around … but he was shooting 42% on threes last year? Huh?

Two years ago. Last year he shot 29% on threes.

If I was the GM for Golden State, I’d make a deal for Ty and sign him to a two year contract. At the end of this year, I’d trade Klay and let Poole slide into his starting spot next season. Ty would fit right right in as the third splash brother. Think Klay’s best days are behind him due to injury but hope to squeak out one more year/championship and this move helps resolve the salary cap and luxury tax situation. Wishful thinking on my part.

More realistic is to land in Dallas to fill a need of a player who can knock down shots/get buckets alongside Luka.

Hope to see Ty land somewhere that can best utilize his skills. I don’t know Houston’s roster situation but this seems to just be one of those cap motivated moves for both teams.

Good chance that Ty ends up cut from Houston once the dust settles would be my guess.

Well let’s hope he lands on his feet somewhere. I did see Houston drafted TyTy Washington. So they’re going to keep TyTy as a first round pick although I bet Ty would beat him 1-on-1 nine times out of 10.

I think they are pretty even. So probably would be a Ty

He just got waived

That’s may to his favor can go sign where he wants. Refuse to believe there’s no market for him

He’s had more opportunities than most get in the league. Just hasn’t proven to be able to do the one thing that would keep him on the floor or a roster - hit threes (like 40%+).

Seems like his best shot right now is to get a training camp deal for a team with a limited cap space in need of a shooter. Like the Lakers or Bucks. Then prove himself. Or find that Joe Harris opportunity. But the glaring stat I see on Ty’s career and the one that scares me is games played. 31, 33, 48. Last year he played the most games of his career and sat out the final third of the season with injury.

Becoming a FA and dropping his price tag gonna be the best thing to happen to him if he wants to stick on. Too much liability to sink 6-8mil on a guy who only gives you 40 games as a back up pg.

I will show my ignorance but wouldn’t it be cool if Kyle and Ty played together again.

I’d love to see him get an opportunity and think he’d thrive if he got one, but at this point the odds of that opportunity coming in the NBA in the near term seem low.

Not an athlete, not plus size, no demonstrated performance in a few years in the league. Plus a spotty injury record. It’s a tough sell.

Y’all are right about the closing number of opportunities.The biggest thing Ty can do for his career this year is actually play basketball. Whether it’s a bad NBA team, the G League, or a late opportunity overseas. Dude needs to get on a court and play.