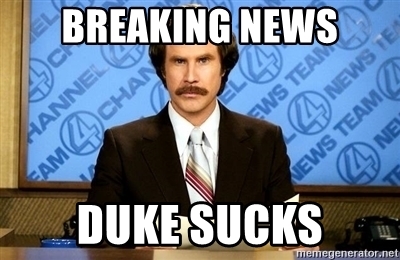 Unfortunately Duke’s team makeup is our complete Kryptonite… Long and athletic at every position. Only being 12 point underdogs is just a little respect to our recent play and CTB. This is most likely a 20+ point loss. But anything can happen in college basketball… Go Hoos!!

I’ll be surprised if it’s ever close, could see them jumping early like Houston. Seems like Duke gets up to play us a bit more than they do teams like Clemson, Miami, etc

What if Igor is the answer for Banchero?

Impossible to know. He doesn’t play.

Tony never let’s fans see if his lack of playing the more talented youngsters would be better.

From what we’ve seen of Igor, he’s not the answer defensively.

I think maybe we see Taine.

We will get replays of all of Kody’s minutes in July on draft night, so don’t worry if you miss some tonight.

While do I expect a loss tonight, this is an awesome opportunity for this team. If we somehow pulled off the upset, it could really reignite the engines a little on this season. If we lose, it’s still fine - it’s an expected loss - but I’m glad we have this chance at a big upset at this point in the year.

Ha ha! This reminds me of seeing Zion dunk on Jay Huff endlessly on a loop during 2019 draft coverage. Always thought it was a bit unfair because (1) respect Jay going for the big swing there (block on a fast break dunk); and (2) Jay got Zion on the other end once.

Anyone know our all time record at Cameron? Curious which teams of ours have won down there in that shitty but awesome gym

They have at least 2 and potentially up to 5 1st rounders in this upcoming NBA draft. That’s what 2010 Kentucky had too. Duke’s already underperformed by not being undefeated and blowing everyone out. They slip up on occasion. Let’s hope they slip up and we take advantage. Think that’s our only chance. If they play up to capabilities, I don’t think there’s anything we can do about it.

UVA is 11-59 all time on the road against Duke, according to the UVA website.

Years since 1970 that we’ve gone to Cameron and won:

Rece⁉️Davis and Cory Alexander on the call tonight

Says something that even in our run of recent dominance, we’ve only won there once. Of course, we don’t play there every year these days, but still. Hard place to win (obviously).

then my internet lied

Good. And that Rece is Rece

is on the call. Shulman no exclamtion is out @haney

Tony has always kept it close at Cameron historically, which is pretty cool. Our last 6 games @ Duke: