The UVA Basktball Program Continues to React & Respond to the Murder of...

(Image – Johnny Carpenter) In response to George Floyd’s death at the hands of the Minneapolis police officer Derek Chauvin, protests have erupted nationwide. A number of former Virginia basketball players have been involved in the protests, while...

Thanks for writing and sharing this article here. It’s frustrating to see commenters in other UVA sports forums who push back against posts like this and argue that conversations about racism, white supremacy, and injustice don’t belong in a space like this. But, especially recognizing that the UVA fanbase is predominantly white (not trying to be divisive, just simply stating a fact), how can we say that we support the lives of Black and Brown athletes if we refuse to acknowledge, confront, and be a part of dismantling the systems of oppression that consistently strip them of their humanity and continue to impose so many more barriers to life like this?

Sending love, solidarity, and continued commitments to action to all of our Black LRA community members, yesterday, now and always.

It kind of is crazy how there are some who are more vocal about a TV being stolen than this image. https://storage.googleapis.com/afs-prod/media/f966b5bc49d147c2aa3af0b5bfe7a1b3/1000.jpeg

Lots of questions to be asked

I am so happy Brogdon spoke today. His voice was the exact calming voice I needed in a time where there is no real leadership

I’m not sure about the rest but I feel safe in sauing that No. 4 on your list comes from the same systemic racism that is causing so many black men their lives.

There’s a segment of the population that does not want to hear what athletes have to say because it forces people to examine their own flaws.

There’s also a portion of the population who flay out don’t want to hear them speak ans view them as property and non-human pieces that are just meant to entertain. Sit in the the stands at almost any sporting event and listen to some of the commentary when a player misses a shot or makes a poor play. Listen to some of the heckles that black athletes recieve from some fans. Read the commentary on almost any message board or the read the reporting on an black athlete when they run afoul of the law or have domestic issues.

All of those will give you your answer to no.4

Thank you for your answer!

Some of my friends have been sharing this video of Trevor Noah delivering a very compelling explanation of why looting is occurring and what it means in the context of systemic racism in the U.S. and power dynamics in a society, starting at 8:17 until the end (about 10 minutes): https://www.youtube.com/watch?time_continue=498&v=v4amCfVbA_c&feature=emb_logo

It’s well worth a watch/listen and I think he provides some useful ways to think about answers to your other questions!

Lol are you literally me? I was actually thinking of posting this exact video before I typed up my word wall above. I second this watch. 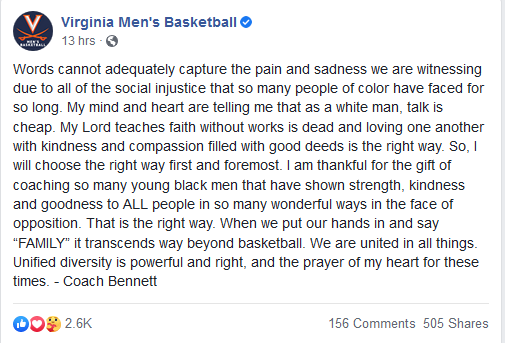 Going to be posting an updated piece tomw

Maybe the first critical statement of CTB. While there is nothing wrong with his statement. I wish he went further and was more assertive. He has a massive pulpit and can use it to make strong calls and show his actions in working for change.

The UVA Basktball Program Continues to React & Respond to the Murder of...

(Image – Johnny Carpenter) In response to George Floyd’s death at the hands of the Minneapolis police officer Derek Chauvin, protests have erupted nationwide. A number of former Virginia basketball players have been involved in the protests, while...

I linked her article in mine as well, but you really ought to read Dawn Staley’s article in the Player’s Tribune. You can disagree with the politics, but you’ll be hard pressed to disagree with her sentiment. People are mad because NOTHING HAS CHANGED.

Missing out on Dawn Staley is ome the greatest mistakes in Uva history. Her statement strikes the right tone possess the empathy and anger that so many are feeling right now.

Knowing Dawn at UVa as a the GOAT at basketball and seeing her now as the complete package as a grown professional is one of the coolest things I have ever seen. She was beyond shy at Virginia except with her friends and when she was on the court. Now she gives speeches in front of 1000s of people regularly and leads her teams at the highest level.

Olympian and professional. So proud of Dawn.

I remember hearing that she was quiet and pretty soft spoken during her playing days. That’s crazy when you see what a leader she has grown into. Just goes to show what a Virginia education can do for ya.

One of my favorite stories we had public speaking together right before lunch. Her first speech she couldnt even look up from the paper at the 15 kids in class who all looked up to her. 5 years later she was addressing a huge crowd in Philly at an outdoor event and absolutely dominated.

Someone on another forum posted, in response to Brogdon appearing on CNN to talk about the protests, “Is he going to talk about Black on Black crimes”. I wanted to post my response here before it gets deleted there.

Man, thank you for actively speaking up against people who say stuff like that. I simply will never understand how people are deflecting from the root of the issue. A man was MURDERED. By the police. And it happens far too often. This should not be a political issue; it should be a human one. What does it say about executive leadership that a murder has become a political issue?

Well said. The argument about “black on black” crime is nothing but a distraction used by those unwilling to address the real issue at hand. As you referenced if you want to go deep, it is an easy leap to make the connection of crime to a racially charged legal system, and an even more dangerous socio- economic system that is set up to keep minorities and those suffering from poverty at bay, and continually infighting.

What we are seeing happen across the country is the water boiling over after centuries of frustration and anger of being oppressed, ignored and dehumanized. It is a situation that is only getting worse, and the need to be addressed is increasing.

Malcolm Brogdon and the others who are standing up to state their feelings are just the tip, and they are doing what they can because they can no longer remain silent. These are the voices we need to listen to and hear what they have to say, not those who chose to use smoke screens because they are too cowardly to face the reality that is in their face.