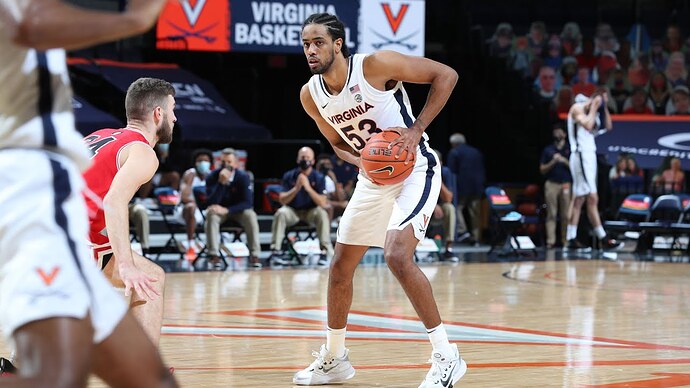 This is a decent Kent State team that boasts some good players with impressive athleticism who could be problematic for the still gelling UVA defense while also challenging some of Virginia’s slower-footed players in the frontcourt.

I’ve never gambled on sports, but if I did, Kent State to cover with a UVA -20 line would look mighty appealing. That said, hope we blow them out.

I think teams like this only have a chance with us if they can drain their shots from long range like UMBC did…With the way our defense has looked at times this year, we certainly are vulnerable. But since Kent state is a poor 3 point shooting team, this is what works against them the most.

Those teams also need a stretch 4 or a 5 guard line up to really slice and dice/kick out. If its 3 small guards but two bigs who can shoot a three we will be fine.

watch out for Tekorian Smith off the bench

His UNLV teams were amazing

Jay has matched up with their big guy Hamilton (Temple transfer) before. I’m not sure I’ve felt this flat for a game in a long time. Everything about it feels off. I hope the team does not share my emotion.

I’m just ready for us to play somebody legit already. San Fran is decent but don’t have any type of tourney potential. Giddy to play MSU.

Definitely relate to that. This all feels like a giant preseason. Really curious to see what this group can do against a talented team

So those cardboard cutouts are $75 and go to the athletic fund.

I didn’t read the rules but hope we can crowdsource a dozen of @anon37693817 off @DFresh11 winnings.

Hoos in the Crowd Fan Cutouts On Sale Now

Virginia Men’s and Women’s Basketball supporters now have the opportunity to purchase “Hoos in the Crowd” fan cutouts to be put on display this season for home games at John Paul Jones Arena.

Haha, like I said, if I could get the right placement, I’d do it today.

This seems like a big difference for this year already. 1,066 college basketball players have played at least 50 minutes this season. Only 27 of those 1,066 have not committed a turnover. UVA’s Reece Beekman is the only freshman of those 27. #GoHoos https://t.co/FYeTvE2qSD I did one today. what yall think?

Reece has by far the lowest usage on the team among non walk-ons. It’s impressive but in context less so

I don’t know why the crowd cutout convo made me think of this, but I remember being in the student section in a home game against Longwood, and they had like eight fans in the section to our right (not the section behind the visiting team - opposite side). We were destroying them but the fans had snuck in booze and were getting drunk and railing on us, and there was a hilarious back and forth. Security eventually escorted them out (presumably for the drinking) but I always had to give them credit for being there and getting into drunken arguments in support of the Longwood Lancers.

Anyway, what I’m saying is, I guess I wish I had picture of those drunk Longwood fans to put on one of those cutouts.

No offense to Mr. Neckel (and if you post or read here, well, sorry in advance) but his number crunching always sounds interesting, but all it does for me is show you the problem with sports analytics. You can twist and pick whatever numbers you want to prove the opinion you’ve already held. An opinion you probably formed with the eye test.

The main thing I like using analytics for is to understand what’s going on in other conferences. Not as much for UVA or other teams I regularly watch. I mostly watch ACC teams and the top 15-20 so I will rely on different metrics to tell me how the 5th best SEC team compares to the 5th best Big 12 team.