Yep two in the top 50 are from Louisa Olivia McGhee and Kymora Johnson at STAB. Neither are committed. Would be huge to get into that conversation

She battled some injuries too as I recall. Maybe a knee.

I think you’re right. She banged up her shoulder this yr agaisnt GT maybe but didn’t miss time.

IIRC, Mo’s big offer before the season started was Minnesota, but that was before she was VA Player of the Year. She’s kinda kept it quiet since then so maybe there’s an opening.

Edit - Was told she has indeed gotten a bunch of offers since then, she’s just being low key about it.

Coach Mox mentioned up tempo and strong defense in the same sentence. Think she and CTB will be able to coexist?

She said she runs blocker mover and she learned it by watching Tony Bennett’s teams. No idea if that’s actually how she learned it or if the version she runs is anything like what we run, but I see some opportunity for collaboration there. 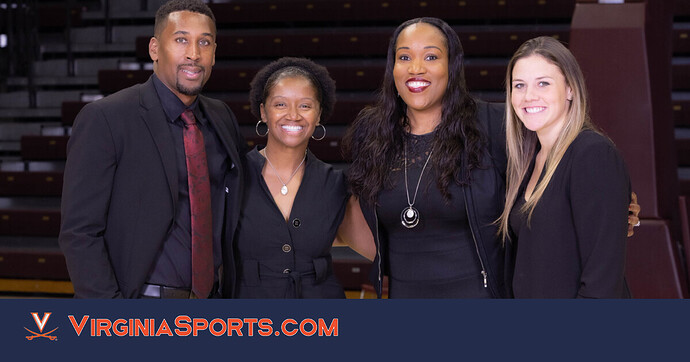 Alysiah Bond, Tori Jankoska and CJ Jones have been hired as assistant coaches and Chris Toland will join her staff as an assistant strength and conditioning coach Would be such a great pickup. Hope the official visit goes well.

Do you know if UVa was an option in her recruitment out of high school?

It was not as I recall. Frankly she was way above UVA’s program at the time. Honestly still is, but it’s a more reasonable fit now for multiple reasons.

Don’t know where else she’s looking, but from social looks like her boyfriend is a kicker (football) at Purdue. A lot easier trip from South Bend than Charlottesville.

There are kickers in charlottesville she can date.

I also feel like the Hoos may get a nice hometown discount this time around.

What’s the story behind her playing a big role her freshman year and then declining in minutes the last two years (though her efficiency improved)?

Just being in the mix for her is a nice boost for the program. Nice work by Coach Mox.

Not sure if I’ve shared this one here before, but I once sat next to Todd Braverman as he was working on his Computer Science 101 project – a powerpoint entitled “Kickers of the ACC.” One of my many brushes with greatness… Oh and Donny Green** was in an econ class with me. He had the misfortune of following Will Brice, but he was also really good, wasn’t he? Punters are the real heroes.

To add to the topic at hand - exciting start for Coach Mox’s tenure. Hope Brunelle commits!

Good mooooooorning Dragon! This is the post of the day week maybe dead period month

Far as I’m concerned kickers don’t count, they are a dime a dozen. She can find a dude that can do that anywhere.

Maybe I’m overselling this, but I thinking signing Brunelle would be a massive step for the program. I don’t think she’s a game changing player on the level of Paige Buekers at UConn or Boston out of SC, but she’s a step up from the current talent. More importantly she is a direct tie back into the local talent scene which is booming. It’s a cultural defining moment. @chavlicek15 talks about CTB needing to secure Va recruits same for Coach Mox. In my ideal world inking Sam leads to either Olivia McGhee out of Louisa or Kymora Johnson at STAB