Alrighty so I’m launching this thread to be our preseason thread for the next two months leading up to the beginning of the CBB season in late November. I’ve got a whole slate of preseason articles planned for the next two months. From team strengths and weaknesses, positional breakdowns, and rotational predictions to offensive system breakdowns, conference power rankings, and predictions, I’m trying to cover everything I can.

First off, I broke down the three most significant weaknesses I expect this team to have to deal with this season. Hint: they’re gonna miss Mamadi and Brax. 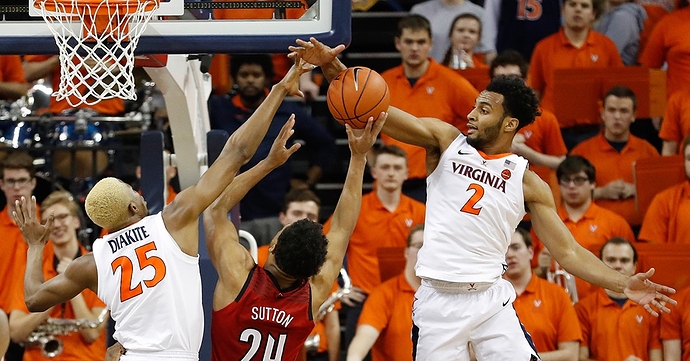 Once again, this Virginia men's basketball team appears to be a legitimate national championship contender. But, despite all the hype, there are still a number of critical potential weaknesses that this team will need to address and overcome if...

What’re your thoughts and what are your biggest concerns for the team this season?

Zach’s like a machine. Basketball football lacrosse, whatever. Man knows his stuff and cranks out the content.

He damn sure does. Knows his stuff too. His analysis of our weaknesses is spot on. I been thinking the same thing about our interior defense as well. Its important to go with a pretty set rotation. This is gonna be especially hard with the schedule we have to play.We dont get any early games where Tony can experiment on some lineups Just learn on the go. We will be ready come tournament time. Wahoowa

Will McKoy play on the perimeter? I think he can but I know others may have a different opinion. Hes a good shooter and has more tools in the big than he show cased last year. Tony does love his 8 man rotations and Key/Mamadi were the big minute eats at his position.

Hope the potential for increased playing time gives him more reps to be confident with his minutes. I hope our bench in general gets a lot of minutes in OOC games minus Villanova ( I want to kick their ass) to get comfortable for the long run.

Also I just realized there is an article I just thought it was a thread LOL. I havent read it yet but I imagine post defense is on there? Huff is a great help defender coming over for the swats and works well with the doubles but still has a lot of question marks on his iso defense. Also who does Hauser guard?

Nice article, thank you. It ties in with your first point, but I think defensive rebounding could be one of the growing pains we see. It’s always been a strength of CTB’s teams but we’re losing a lot. Braxton was a beast on the glass, Mamadi was probably just as good, and while Jay has good instincts he’s often off the floor for blocks and taking himself out of position for rebounds. Feels like Caffaro and McKoy may inherit the dirty work box out duties, and hopefully we continue to see the guards get in there to help out.

Biggest area for concern imo is turnovers. The defense will be top 10 as always. Adding Hauser to the mix and having a year older Tomas should fix most of the shooting woes. Plus we have Carson if we need him. But the turnovers were arguably even more crippling to the offense than the shooting last year. Kihei needs to improve in this area as his turnover % has been above the Bennett PG norm in both of his seasons. Understandable given he was a true freshman and then asked to carry the entire load on his own but we still need him to make that jump in ball security entering his 3rd year. Having the added spacing from Hauser and Reece to help run the point should help. Hopefully Casey, Kody, and Tomas will be more comfortable in the system and help eliminate most of the unforced turnovers from last year. If we get back into the top 20 in TO% then we should be the top 5 level team everyone is hoping for.

I’m with you abt defensive rebounds. Could be ugly early in the yr against some of the tougher non-con opponents, and Huff and Hauser vs Brooks and Bacot on the glass makes me tremble. But, as you said, I think McKoy in particular will be the guy they look to when/if there are issues on the backline. Can always just play Hauser at the three and sacrifice a little ball handling/offensive versatility to be sound defensively.

Turnovers are absolutely still an area of concern, but I think, as you mentioned, that Sam is going to be a huge help for Kihei. Even if he’s playing the four, he’ll bring something that Mamadi and Braxton didn’t in terms of ball handling. Additionally, I think this team will be at its best offensively when Sam is at the four, so that should allow Bennett to play two guards in the backcourt to help Kihei compared to when the team tended to run with Key, Mamadi, and Huff in the fronctourt and forced Kihei to take the load of the ballhandling. But you’re right that we’ll need to see some sort of development from those three guards who are returning alongside Kihei if the turnover problems are to go away.

I think Justin could play on the perimeter, but as of now, I see no reason why he should. We’re already at least seven deep in the backcourt, no reason to play him there for now. I do agree that he definitley has a wider skillset than we’ve seen, but that’s not his role this year imo.

Regarding Huff, I’m not all that concerned about his iso d. Worst comes worst we can just double in the post, and he’s also got the length to disrupt when somebody backs him down. But we will need to him to help control things on the back end.

Hauser guards the least impactful big/wing on the opposing team. He ain’t gonna be terrible but highly doubt he’ll be a plus on that side of the ball.

Great analysis @brogdonfanpage. You hit on the point I’ve been hammering all off season. Where does the interior toughness come from? Who is the enforcer and intimedator? Huff is a great shot blocker but he did a lot of his damage from the weak side. The Hoos have thrived in the past bu have a strength and physicality on the defensive boards. They cannot afford to gove extra possessions.

Well done @brogdonfanpage! Despite my optimism about the 20-21 squad, I feel like the Hoos might be overhyped heading into the season. Seems like there are a lot of moving pieces this year that have to fall into place to be a serious Final Four contender, which is where it seems like the public expectation already is. The article outlined a lot of the defensive concerns replacing Mamadi / Braxton, but I’m mostly concerned about the offensive improvement. I think below is what has to happen to be a Final Four contender:

All seem like they could happen, but feels like a lot of moving pieces to just assume that it will all fall into place, especially with an unorthodox offseason. Is this a promo for a WWE match?

Lol I’m actually NOT mad at this. He’s definitely throwing shade BUT if it’s true then I’m glad he’s getting it out in the open.

That’s awesome. I like Mack. I just hope he’s writing checks his team can cash.

Only thing missing is “If you smell what Coach Mack is cookin!” That and a roody poo, candy ass.

This is wack unless he is kidding

I actually love it. Put it out to the public that if the game doesn’t get done it’s Cal’s fault and that Louisville tried to make it happen.

Nevermind the fact that he’s a respect basketball coach. As an long time wrasslin fan I’m digging the heel promo. No idea why he felt the need to do it other than a slow news day