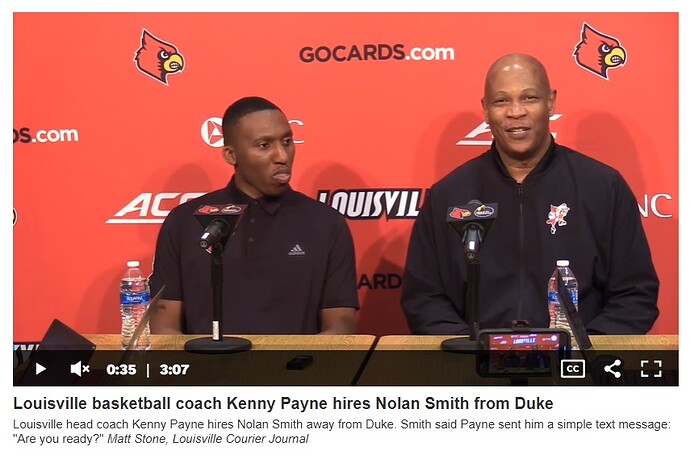 Louisville is gonna set some records this year. Not the good kind.

Only 23 assist in 5 games compared to 90 turnovers? And that team supposedly has six 4 star players according Louisville fans.

By comparison, I believe we were averaging 20 assists per game after 3 games. We’ve slipped to 17.3.

How can this not be coaching … maybe i am missing something.

It’s puzzling to me that winless Louisville is ranked 60 spots in KenPom ahead of an undefeated Southern Miss team that has a 12-point road win over Vanderbilt.

What’s strange to me is Iowa State at #5 in a rebuild year with a cream puff schedule so far.

Five head coaches in seven years (with two being “interim”) plus looming NCAA sanctions, up to the death peanalty, until recently have destroyed any continuity the program might have had. An assistant coach attempting to extort the school, excessive premature attrition, and a lack of leadership in the AD’s office have all contributed to this dumpster fire. And, from my perspective, there’s no one at hand with an extinguisher.

Not a lot of info to go on in 5ish games, and blowing out a terrible schedule is how you’d expect an elite team to perform. Having preseason ratings incorporated in early season ratings makes them a little more robust to over (or under)-performance that regresses to the mean by the end of season, as KenPom wrote about a while ago: https://kenpom.com/blog/preseason-ratings-why-weight/

Basically, at this point in the year, there’s no efficiency ranking that I consider that reliable. The problem with Kenpom is that you can yell it till you’re blue in the face, but nobody remembers that the preseason rankings are mostly telling the story. Eg, I’m listening to Brad Franklin’s podcast, and Ferber just said we are a top 10 defense and offense right now, which is incredibly misleading. But it’s true by KenPom!

(I basically wish Ken did something similar to what Torvik does - or at least have an option that fades out the preseason rankings earlier. Because we are a dumb, idiotic species with silly thoughts and worse intuitions, and if anyone should know that, it’s someone who spent 4 years of his life surrounded by Hokies)

Fwiw, currently at Kenpom, we are 12 in defense adjusted. And 105 raw. So some of that adjustment is playing good comp, but most of it is preseason expectation- as declared by Ken’s algorithm)

Yeah, the ratings with preseason influence included aren’t going to be a good summary of “what has happened so far” but if you wanted to try to predict right now where a team would be at the end of the season, your predictions are going to be more accurate if you include preseason influence. Ratings like KenPom, Torvik should always be interpreted as forward-looking.

I totally get that KenPom wants to maximize his predictive value, and he should. If his analysis shows that preseason expectations have significant influence 10 games into the season, then he’s doing it right by keeping that data in play.

That said… he still should show us the “no preseason influence” rankings. Not because it’s more predictive (he tells me it’s not, and I believe him), but for the sake of transparency and insight. I just want to understand HOW his model is arriving at its numbers. It’s great that he gives me “the answer” but even better if I can understand it.