Thats an interesting development…Wonder how much help that gives us? Of course its just barely a quad 1 win for now, and if ASU has a dip, it quickly will descend back to a quad two. 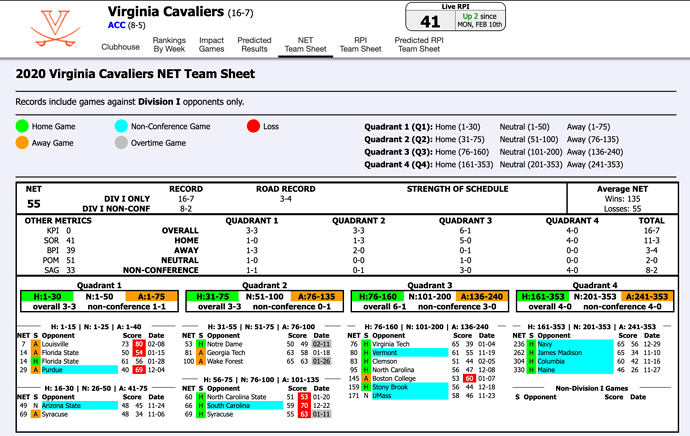 Does it help the hoos? UofL won’t mean as much on Wednesday

Last year’s selection committee did not remain absolutely true to the NET results. The committee’s chair said members were told to use it only as a guide. So there’s some latitude in play.

Looking over yesterday’s bubble games, not that much changed. Stanford lost at home to Arizona, not a bad loss but they’re fading fast. VCU’s at large hopes may be gone after another loss at Richmond, but the Spiders are also in the hunt. Georgetown moves up with a high Q1 win at Butler. Mississippi State won at Arkansas, both somewhat in the picture. Tennessee lost at South Carolina.

Scoring margin must be a big part of the NET rankings. Syracuse moved up 4 spots to 65 with a close loss at FSU while Notre Dame (59) dropped 5 spots after being blown out at Duke.

Q1 win watch: We want Arizona State (51) inside the top 50. They play at Cal today. VT is up to 76. If UVA wins in Bburg, it’s unlikely they’ll manage to finish in the top 75 to make it a Q1 though. GT (86) dropped 5 spots without playing. They’re now lower than before their win against Lville. Bottom line is ASU looks like our only realistic hope of adding a Q1 win, other than earning it vs Duke or Louisville.

A Boston College win over NC State tonight would give us a 2 game cushion for the 4th place ACCT double bye. So go Eagles!

Lunardi’s latest from this morning. Still has UVA as an 11 seed. 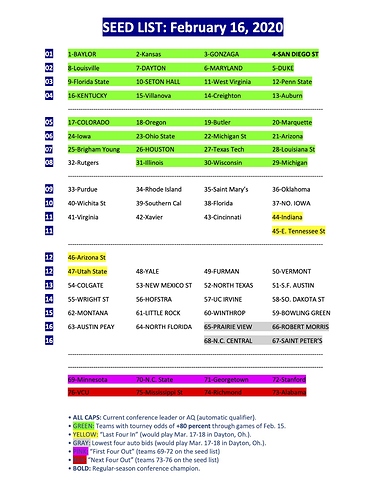 We are gonna run the rest of the season and be way batter than 11. Proly more like 6-7

Who should we be rooting for over the next few days?

the University of Virginia big Ben

Haha… and who else? Trying to figure out what everything means for our tournament chances and everything

Well besides UVA winning everything, it sounds like ASU winning and BC winning today was the best we could hope for out of the day, right?

I think everything we could have hoped for happened today. 2 game lead for 4th in the ACC now with the NC State loss. Could be 3 games by Wed (Syr at Lville, NCSU vs Duke).

Bubble teams Indiana, Minnesota and Memphis all lost. NC State fits in there too.

Totally pulling this out of thin air but I feel like the magic number is 13 for the Hoos. 13 conference wins gets them in the tournament. That means winning 4 out of the final 6. Would show them finishing strong. It gives them the leeway to lose to UofL and Duke. But in that scenario they may need to pick up an ACC tourney win. Split with Duke and UofL and pick up 3 other wins that also works.

The biggest issue will be not losing to non quality teams. The game agaisnt Miami could be huge. They are healthy and playing well but not a top half ACC team a loss there could end it all.

9 pm game in Miami on a Wednesday between two home games against top-10 teams😬. I’m with you