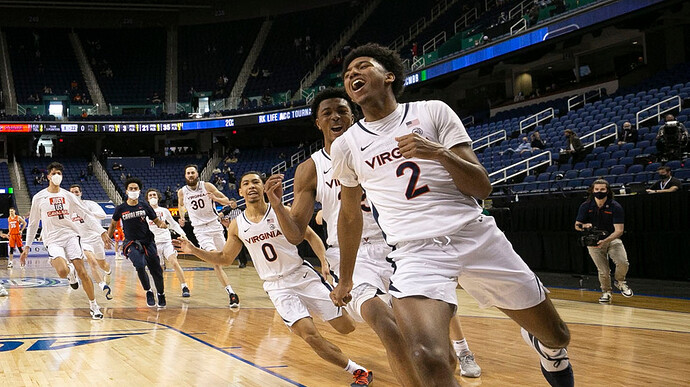 Virginia and Georgia Tech will meet for the third time this season, only now with a trip to the ACC Championship game on the line.  Tipoff is scheduled for 6:30 PM Eastern Time in Greensboro.  The Yellow Jackets advanced with a win over...

I think having played them twice is a big deal for us. This isn’t meant to be disrespectful but GT reminds of a baseball pitcher that relies on junk to get guys out, and typically the more hitters see a guy like that the better they fare.

It will also be interesting to see if they try to play bigger like they did today with Moore getting 34 minutes and Usher playing the 3 primarily, or if they go with the 3-guard lineup with Parham playing heavy minutes, which he did in the first two meetings, logging 75 of 80 possible minutes. I think going small gives them the best chance but we’ll find out tomorrow.

Anyway, they’re certainly capable of beating us but I won’t be surprised if we control the game this time around and win by a more comfortable margin.

So ur saying my job this season is almost complete?