Took me couple tries to open but great game when Rich Morgan was a first year vs UNC at home. Stay tuned for Rich… around 37 minute mark he gets great dunk off backside rebound 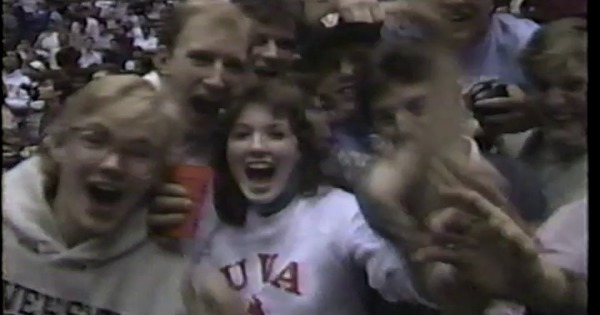 Thanks for posting that, Doug! That game was my third year and one of my all time great sports memories. My friends and I waited outside UHall for 2 hours in the rain to get into that game and were rewarded with great seats in the first row of the student section right behind where the football team sat. We had an incredible view of Richard’s famous put back dunk and went wild when he did it.

We partied all night on Rugby Road after the game. One of my favorite photos is of my two best friends and me at about 5:30 the morning after the game. We all look exhausted, but deliriously happy (and, oh yeah, drunk). It’s a memory I’ll cherish forever.

thats awesome and thanks for sharing G. The energy was palpable in UHall just watching this. Am sure I watched it live back then growing up from Tennessee. If you were a neural basketball fan watching that day the Hoos won you over!

There are so many remarkable things about that broadcast. First is how relatively composed Vitale is in his color commentary. Nowhere near as bombastic and clownish as he became once he got really famous.

Second for me is the part of the open that featured Warren Martin. I knew Warren from home – he and my brother were in the same class at different high schools and worked out together in the summers. Warren is an incredibly nice guy. But that didn’t stop me from heckling him from the breezeway outside UHall when Carolina’s bus pulled in underneath

Next is the play where Tommy Calloway set a great back pick that sprung Olden for a nice alley oop dunk. I played against Tommy in high school when he was at CHS. He’s another really nice guy.

Finally, I get a kick out of watching Johnny Johnson and Mel Kennedy. Those guys were real gym rats who ate, slept, and drank hoops. I played in a ton of pick up games with them at Slaughter. I never could figure out why they wanted to play so much pick up after all the practice time they put in. They just really loved the game, I guess.

All in all, that video is full of great memories for me. Thanks again for sharing.

Slaughter was our favorite spot too. Lotta greats playing there all spring in the afternoons. Thats where I got to know TC as well. Great dude that could hoop well after being done at UVa. Love all your connections to this game Remember Arnie? hahahah

I don’t remember Arnie, but I remember lots of great characters from Slaughter. Like Bird, who was a legend at Slaughter and The Dell during my time. And the 3 dudes in their forties from the Insurance Institute for Highway Safety who always played together and could hold the court for hours against a bunch of nineteen and twenty year olds (I don’t remember their names, but we called one of them Gary Goggles). None of them could jump over a phone book, but they knew how to play and knew exactly where each other was at all times. Playing them was incredibly frustrating!

I could go on for hours about all my great memories from Slaughter. But I won’t because I know my reminiscences are boring as hell to everybody but me.

Thanks again for the great trip down memory lane!

me and Cory used to make Coach Jones mad in March by saying we couldnt wait for the Slaughter season hahahaha. You can bother me with these stories whenever @GMoney. love this shit

No doubt @GMoney I’m always down for some stories about balling at Slaughter. That is still one of my favorite courts to hoop on. My only regret is I didn’t get some run in against @DFresh11 he was before my time.

I like that my beer runs are far better, and they make my Slaughter stories seem even more legendary.

I was that era too and spent way too many hours playing at Slaughter. I remember those old guys that never lost and nobody could figure out how they were so good. I remember matching up against John Johnson one afternoon in April and just to poke at him a little asked if he’d put on weight. He stepped back and hit a three from about 23 ft and said “Nope.” No connection at all but he won the smack talk.