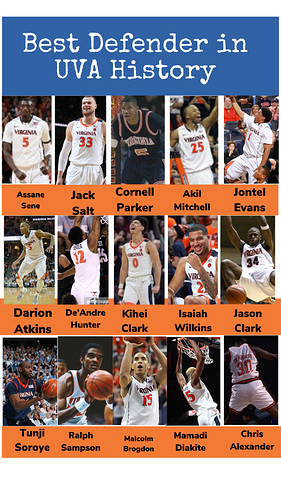 Ralph goes one. Look at his blocks records at Uva they’ll never be touched. Diakites block streak looked like child’s play compared to his.

Malcolm deserves serious consideration as well. Defending in space is a very different thing than what the bigs do. The air gets thin out there and Malcolm was as good as anyone I’ve ever seen.

Akil. His ability to hedge and recover and still provide rim protection was the secret sauce in the pack line and I suspect may have changed Tony’s view of roster construction. If Akil had been an adequate outside shooter with a more versatile offensive game, he would be way up there in the discussion on best big. No disrespect to Malcolm or Dre, but Akil could guard any position on the court.

RALPH!! NO QUESTION. NCAA made rule change to negate his inside dominance (3 point shot). Only other player that I can think of whose dominate play caused a rule change was Chamberlain

What an incredible list. Sampson has to be #1 - in an era with no 3-pt shot he guarded the rim like no other. He and Cornel Parker are the two pre-Bennett no brainers for a Top 5 list. In the Bennett era, Akil was the first lock-down defender with attitude. He set the standard for Bennett’s program of what an elite defender is. Brogdon was similar as more of a perimeter defender although both Akil and Brogdon could cover anyone. (Devon Hall should be on the photo list somewhere.)

Isaiah Wilkins also excellent in making the team defense work perfectly and covering for others who made mistakes. Chris Alexander was quietly excellent. Atkins’ excellence was a little too brief IMO. Kihei and Bub Evans excellent on ball but with some obvious size limitations. Dre Hunter would have been Top 5 IMO had he been here more than two years.

Cornell was an incredible catch up defender. Was so good at covering up for a defensive mistake and getting back to the play. Anthony Oliver should be mentioned here as well. Think about the scorers he shut down in the ACC in those days. Brian Olivers and Rodney Monroes night in and night out

A few names from the past worth noting: Tom Briscoe, Othell Wilson, Bobby Stokes, Kenton Edelin, Darrick Simms, Anthony Oliver, Harold Deane, Chris Alexander. I am not sure that Cornell Parker’s defense can be overstated. His ability to neutralize Grant Hill was key to those wins against Duke in the early 90s. Also, Jimmy Miller wasn’t a half bad defender, either. In December, 1982, with Sampson sidelined (flu?), Miller had to defend Hakeem Olajuwan in an early season OOC matchup with Houston. Virginia won. Or, at least, that’s the way I remember things.

This one is not even close in my opinion .Nobody has ever protected the rim like Ralph did. To make it interesting to me I would make a category for lockdown defenders. That would be an impressive list and very hard to pick

First has to be Ralph, absolute rim protector. After that I’d say Akil and Isaiah are tied. Akil could flat out guard anyone and Isaiah was a leader of the defensive unit. One of the best help defenders I’ve seen.

Olden Polynice, why omit him, Rick Carlisle just to have an NBA coach on the list. Steve Castellan who shutdown Clemson’s Grant so well, I was shocked Grant went on to be an NBA all-star

Horace Grant? He was at Clemson long after Steve Castellan had taken his degree.

Olden is a good one…should be on there for sure

For me in the TB era it is Akil. New big men should watch his game tapes of how to defend his position in the Pack Line. Aside from the high hedge and rotate his ability to execute the double on the post and recover to space was a thing of beauty. He seemed to be able to guard 3 or 4 guys at the same time in the paint Incredible positioning by him the

Akil is definitely underappreciated. Should have been on the 2014 ACC All-Tourney team, and probably 2014 ACC DPOY.

Got to agree with you guys. This thread got me to go back and watch somw Akil clips and man I forgot how dynamic he was. Covers so much space the footwork is impeccable for a big

I almost never notice big men away from the ball on D being a guard myself I guess. He was the 1 guy that got me to really take notice of what he was doing

No doubt. That hard hedge the Hoos big employ is crazy difficult as we all know. And Akil made it look easy. There’s no way I would have been able to survive covering that much space.

Doug you have tu get out of 90-94. I knew your answer for each best of thread before I saw your post. We get it, you love your boys and no more 90-94 stories LOL. But you are right with this one LOL. Cornel (Tu-Tu) could defend four positions AND play four positions. I think Ralph shouldn’t be in the discussions. He is the only UVA player most basketball fans know went tu UVA. My next defender would be kihei and than Jontel.