We had the front runner on the podcast. 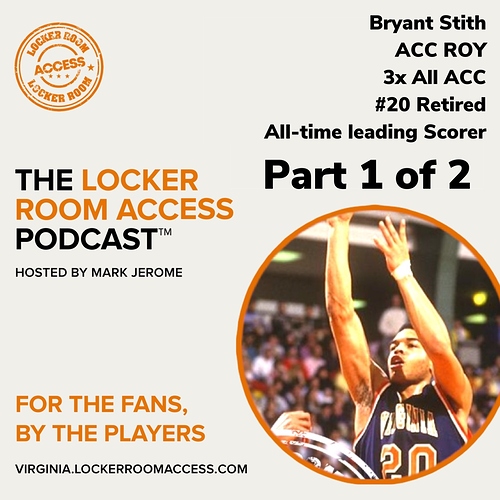 Bryant Stith on scoring last 19 to beat Notre Dame, his thoughts of...

Today, we have one of the greatest players in UVA history and many say he’s a better person than player. Bryant Stith who is the all-time leader in points scored, ACC Rookie of the Year and 3 time 1st team ALL-ACC, as well as the 13th pick in the NBA... 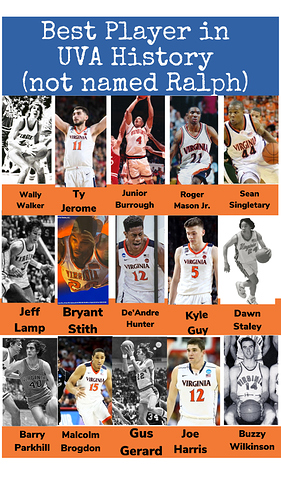 Can’t wait to listen to this one. I’ve been slacking on my podcast listening lately, but I have a big road trip coming up and I’m planning on “binging” all them.

You snuck Staley in there, she is CLEARLY #2 if you’re not sticking to men only.

Stith. Brogs is the only other guy in the conversation.

Anyone want to discuss Buzz Wilkinson?

yes please. I have nothing of value to add but have heard he did amazing things on the court in his time. Prolific scorer etc

I wish I had something to add other than he averaged 32+ ppg his fourth year, and was the 30th pick (by the Boston Celtics) in the NBA draft, but never played a game. I suspect that that says more about the earning potential of professional basketball players (vs. pursuing a business career) in those days than his skill. I wish there was footage of him, but he played in the days before C D Chesley.

I’ve heard a lot about him but never seen him play. Where can I find film of him?