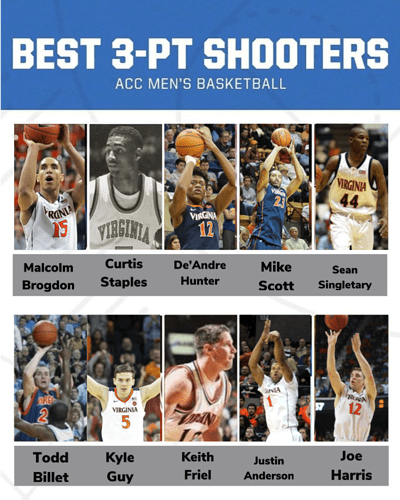 How many PPG would Jeff Lamp have averaged if the 3-point line had existed during his college career?

game changer G. Lotta guys like Jeff Jones as well would have utilised the line and shot more

i am going with Curt and Guy a very very close 1B. But not sleeping on Todd B in a different era

No doubt, Doug! And how much more dominant would Ralph have been with the deadly 3-point shooters spacing the floor and opening things up for him inside? Boggles the mind to ponder it.

well said. mind blowing. JJ said that on the podcast. and guys like Othell having more space as well

Mike Scott sneaking on this list with a career 16-44 from 3 during his 5 seasons at UVA! 6 made 3’s was his high for a season. His transformation to a 3 point shooter in the pros was awesome.

Give me Ty over everyone on this list except Staples, Kyle and Joe.

The ACC played with a 17 foot three point line Ralph’s senior year. Only in league games.

Curtis is my 1 Guy is a close second. I’d love to see the two of them in their prime head to head.

Yeah. 17 feet would keep everything clogged up

Crazy to think it now but 17 feet is not deep at all.

One more Slaughter story for ya – My brother and I attended Coach Holland’s camp in in the summer of 1980 (I was a rising soph; my bro was a rising senior). We had some downtime one afternoon and went to Slaughter to shoot around. The gym was mostly empty. We went to the court on the far left when you walk through the door. My brother, who was a pure shooter, was going around the world from about 20’.

Lamp walked in and did his shooting workout on the other end of that court. My brother was on fire, making about 80% from 20’ while I got his rebounds. Lamp stopped his workout at one point to watch my brother shoot. After Lamp finished his workout, he walked down to our end of the court, tapped my brother on the shoulder, and said, “Nice shooting.” My brother idolized Lamp and tried to do everything like him on the court. I don’t think he washed that shoulder for about 6 months after Lamp touched him. It was pretty much the greatest thing that had happened to him up to that point in his life.

The ACC played with a 17 foot three point line Ralph’s senior year. Only in league games.

That ridiculous line is the only reason State beat us in the ACC Tourney championship and qualified for the NCAAs that year. The rest, as they say, is history . . . .

Anyone know the history of three point line distances? Did Staples and Guy have the same line? Just curious.

I think Curts line was 19.9 and Guys woulda been a foot further at 20.9. Someone else here will proly correct me

That’s what I was thinking. Man can’t go wrong with either of those guys.