yea man. I always remember 19-9 from when it came into play in HS and knew they moved it back later on so I looked it up … 2008

Wow 08… no wonder I barely remember it being moved back. My regular hooping days were well behind me by then. A shame too, because Dragon circa 02/03 I was living that Big Smooth Sam Perkins spot up life.

KG all day. Would have to see Curtis behind the new line.

Richard Morgan belongs in the discussion. I don’t know how his % stacks up against the others, but when he was hot, damn.

Richard Morgan definitely is the one shooter who could get the hottest. As great as that lineup is I still got to go with Kyle because he wasn’t just a great shooter he has a way of getting his shot up with guys all over him. Clutch too 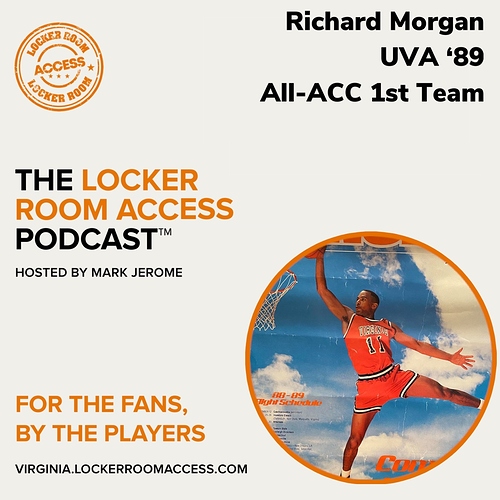 Richard Morgan is one of the most popular UVA players to walk the Grounds. He comes from the same area as Curtis Staples and JJ Redick. What made him such a good shooter? What was it like when Olden Polynice left the program? How did UVA rebuild? Who...

I stayed in his cabin for Holland’s camp at Graves Mountain Lodge one summer before 8th grade. The only time all week I was actually in his group on the court, I missed a couple jumpers bad, I mean way off. He pulled me aside and gave me a talk. Look kid you’re a pretty good player but you can’t shoot out there. Concentrate on what you do well. Now in reality, that is what I did well. lol Just one of those days on outdoor courts. He gave me crap all week about it, in a good natured way of course. The guy was a blast to be around, all the kids loved him.

So fast forward to 9th grade, he’s coaching against my JV team. His best player is just killing us in the first half. 2nd half I switched over on him and shut him down. We come back from way down to win. In the handshake line, I get this little smile from Richard…you still can’t shoot he said.

I always giggle when I hear posters attending UVA basketball camps but never played college. Are the coaches at the camps bad or the players suck and wasted money. LOL. I never hear I went tu UVA camp and played at So and So college.

I also wish UVA bring back the basketball camp for prospects.

I never hear I went tu UVA camp and played at So and So college.

I can’t speak for anybody else, but I went to camp to try and get better so I could earn more minutes on my high school team. I was never anywhere near good enough to play in college (above D III anyway). I got a few letters from the coach at W&L my senior year, but had no interest. U.Va. was my lifelong dream. IM’s and pick up were good enough for me once I got to Charlottesville.

My brother, who was way better than I was, got some interest from Coach Green at Roanoke College and was offered a chance to walk on at Elon, but turned it down to rush a fraternity and dunk on frat boys in intramurals.

I went for shits and giggles and to play basketball in the summer. We didn’t have AAU and all that in Nelson Co in the late 90s. Plus basketball was never my sport, but going to camp got me out of yet another football camp. Not being a spots specialist allowed me to become a much better athlete.

But glad to know I sucked in @TUGARD 's eyes. If only I could give an eff.

Bingo. For us country kids at that time, you didn’t see a competitive game all summer without going to a camp. When’s the Stith pod coming out? Got a camp story on him too. lol

Just a way different time back then as yall say especially when from a small town (Fayetteville TN 7000 people). I went to a bunch of camps and one great aspect was the players or former players who I wanted to be working them (like Richard Morgan). The best instruction camp was Don Meyers (Legend) at David Lipscomb in Nashville. All his players did instruction and coached the teams etc.

Also did 3 years at Dean Smith Basketball School some of the campers were: Hubert Davis, Clifford Rozier, Chris Havlicek, Ganon Baker on and on. Roy Williams ran the defensive clinic! ha

Also did Syracuse who had campers from all over NY, NJ and even LA kids. Watching Pearl Sherm and DC play at night was awesome

Last thing is you had a lot of HS AND college coaches doing those camps then so you could learn different guys ways of doing things if you paid attention.

like how i sneaked that semi joke in there?

My wife was a Sports Medicine major and Richard Morgan was either the same or Sports Management. A bunch overlapping classes. I think it was Kinesiology where they worked together peer reviewing a project. His was the biomechanics of the free throw. I was suffering through Calculus 5 or something brutal in the E School and jealous I couldn’t get a grade studying the free throw.

I went to Duke basketball camp and never made it to the college ranks. I was only 9 years old though, so there were plenty of years to soften that blow. It was also pre-Coach K. Duke was just coming off a run to the title game. Our counselors were guys like Spanarkel, Gminski, and young Gene Banks and Kenny Dennard.

If they had had a three point arc back in the day, Tim Rash and Jim Hobgood would be legendary. For that matter, Wally Walker could shoot from range, too. His first year performance at Carmichael was spectacular!