like how i sneaked that semi joke in there?

My wife was a Sports Medicine major and Richard Morgan was either the same or Sports Management. A bunch overlapping classes. I think it was Kinesiology where they worked together peer reviewing a project. His was the biomechanics of the free throw. I was suffering through Calculus 5 or something brutal in the E School and jealous I couldn’t get a grade studying the free throw.

I went to Duke basketball camp and never made it to the college ranks. I was only 9 years old though, so there were plenty of years to soften that blow. It was also pre-Coach K. Duke was just coming off a run to the title game. Our counselors were guys like Spanarkel, Gminski, and young Gene Banks and Kenny Dennard.

If they had had a three point arc back in the day, Tim Rash and Jim Hobgood would be legendary. For that matter, Wally Walker could shoot from range, too. His first year performance at Carmichael was spectacular!

Always wonder that if they had the 3 would they have been better or would it have taken away from those guys midrange and around the basket skills?

If you’re talking about Rash or Hobgood, most of their offense was from long range, even without the three point line. A half a century later, and it seems nearly all of Hobgood’s points came from the corner (he typically landed out of bounds after his shots), or on back door cuts when he was over played. And, when teams would go to a zone defense, he would go to the corner and jump up and down in anticipation of a pass from Parkhill. Also, Rash is the only player I can recall that made 20’ bank shots a routine thing. Additionally, how did Billet get included in the graphic and Roger Mason, Jr. didn’t?

appreciate that run down I was just curious what you thought @73CAV. Deferring to you 100 percent on this one sir

Deferring to my memories from 50 years ago isn’t always the wisest of decisions!

Personally will trust those memories over any of us remembering anything from last week man!

That is awesome. I wasnt good enough for any camps. LOL.

One could argue that Holland’s failure to effectively use the three point shot to free up Ralph was a problem.

Since that 17’ arc was only to be used in ACC games, and since the NCAAT would not have a 3 point line, Holland maintained all year long that Virginia was going to play as though the line wasn’t there. Among other things, Dean Smith fully exploited that 3 point line, and Sam Perkins went bezerk behind it. Then, again, Virginia only lost 3 regular season games the entire year.

Honestly can’t tell if this is serious or not. But I went to basketball camp to have fun with other kids, play a sport I love, and hang out with college players and coaches I idolized. Same reason I went to many years of lax camp too.

Yeah the camp prices now are off the charts. I know for sports like lacrosse they supplement the assistant’s salary.

I loved the Graves Mountain hoops camp. Kenton Edelin and Tim Martin were my coaches two of the years I went. I didn’t play in college though, @TUGARD

Coach Holland knew how to do it. Mr Graves hooked us up so many times back in the day. He would drive down to Charlotte for the ACC Tourney with his huge grill/ cooker and cook out steaks all night. At age 20 or so we could eat 3 to 4 of em. Great Virginia people that I will never forget

One could argue that Holland’s failure to effectively use the three point shot to free up Ralph was a problem.

I don’t think 17’ was really deep enough to open things up for Ralph on the inside. That line was all kinds of stupid for multiple reasons. The shot was too easy – according 50% more value to what was essentially a mid-range jumper was dumb. But it also didn’t really space the floor at all. Perimeter defenders could bunch around Ralph and still recover to their man at the 3-point line with no problems.

Essentially, that line was the worst of all possible worlds for us. It neutralized our interior advantage over teams like State and accentuated their advantage in perimeter shooting (Lowe, Wittenberg, and Gannon) by attaching a ridiculous reward to an easy shot.

You also have to remember that no one played “man” defense against Virginia during Sampson’s years. Well, no one but Ohio State, and Ralph destroyed them and three of their future NBA players fouled out trying to guard him, IIRC. What would have made a huge difference back then would have been a shot clock. More than a few teams were content to pass the ball around the perimeter for minutes at a time.

Nobody does the mid range game like Mike these days so honorable mention.

Justin? Really? He had one good shooting year but is out of place with this group!

This is one of the hardest ones, but I think I gotta go with Joe or Kyle if we’re going based on pure shooting ability and skills. 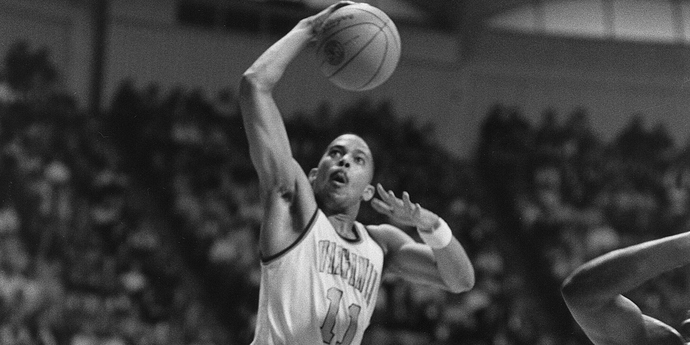 “[Is] this it?” asks Richard Morgan, “I’m not going back in, right?” U-Hall is rocking. It’s 1989, senior night, and the ‘Hoos are beating Maryland by twenty points with two minutes and change left in regulation. Fourth-year Richard Morgan just left...