I know I’ve got about eight weeks to make a decision, but I thought I’d get started now. When I cut the cord, I cut the cord. I haven’t had cable in ages. Most of the year, when I watch TV, it’s either broadcast television, or I stream Britbox and/or Acorn TV. However, when basketball season rolls around, I sign up for one of the services. In the past, I have used both Sling TV and YouTube TV. Each has its advantages. Sling TV has ACCNX, which YouTube TV does not. When the NCAA tournament rolls around, YouTube TV has TruTV, which is not part of the Sling Orange + Sports package, and that is a bit curious. YouTube has an unlimited DVR while Sling gives you 50 hours. I have never tried Hulu+, but I am under the impression that it doesn’t offer ACCNX, either. So… Am I missing an option worth considering?

For the moment, I am leaning towards returning to Sling Orange + Sports. Are there better choices this year? Just a wee bit curious! Thanks.

At US prices, I would and have done that. In Brazil, I get the Disney+, ESPN+, Hulu+ combo for about $9 a month during basketball season. Almost all our games are with the original US broadcasters, but one of the Duke games was on ESPN4 TV here, so had Brazilian commentators.

The legal streams are definitely better for quality and reliability.

I was using YoutTube TV, but my SO has a Disney+ subscription that gave us access to ACCNX. I personally would probably prioritize anything that gets me ACCNX because it drives me crazy when I can’t access a game. That said, I haven’t done the price comparison for this year - so I’ll be doing the same as you shortly.

That SlingTV Orange plus sports does seem extremely reasonably priced. That’s like what YouTube TV started out around. I’ll have to check out what that covers.

Do you get ACCNX through the Disney+ app? Do you have to have the bundle with ESPN plus?

From what I have discovered, Hulu+ includes Disney+ and ESPN+ as part of the package. That said, last year I had ESPN+ as an app, and I wasn’t able to get some games through it. Now, whether I would have been able to watch those games with ACCNX, I don’t know because I had YouTube TV then.

That is a good question. Maybe we got the ESPN+ bundle through a promotion deal when we got Disney+? I’m not totally sure. It actually took several months of me bitching about not being able to access ACCNX before my SO - who is the tech person between the two of us - showed me that what we had could access it.

Anyway, that’s not a helpful answer! All this crap is too complicated. If I pay for something to give me ACC Network, I should get all of the ACC Network, not have to hunt down yet another thing! It’s all going to hell! End of old man rant

The Disney + bundle comes with ESPN +.

The key to ACCNX, I think, is that your ultimate provider must also carry ACCN. If it does, you’ll get the games in the ESPN app with your Disney + bundle.

The other twist is when games are on RSN. The Disney + bundle is of no use there. You’ll need access to MASN, one of the Bally Sports affiliates, etc.

I cannot remember the details exactly, but it seems to me that my VPN played a major role last year in accessing games which were supposedly “blacked out in your area” on the ESPN+ app or ESPN3, or something… I had to watch those games on my laptop as opposed to the TV, but I still got to watch.

The other twist is when games are on RSN. The Disney + bundle is of no use there. You’ll need access to MASN, one of the Bally Sports affiliates, etc.

I’ve found YES and NESN are the most ubiquitous ACC RSNs.

Hulu Live TV does have the ACC network and it has DVR (I don’t remember the hour limit).

Bundle of Hulu, Live TV, Disney+, ESPN+ is $70 per month. I’ve used it the last two seasons and it works well but I’ve never tried YouTube or Sling.

I just looked into Hulu Live TV. While they list ACCN, there is no mention of ACCNX, which might be an issue. Hulu Live TV also shows ESPN College Extra. Apparently, that is the television channel for ESPN3. Sling TV Orange has ESPN3, but YouTube TV has neither. Right now. both YouTube TV and Hulu TV have FS1 & FS2, but Sling only offers FS1 on Sling TV Blue. Also, the Hulu Live TV’s DVR is unlimited. Finally, Sling TV Orange only allows one device to be in use at a time, although its other packages allow three. I think both YouTube and Hulu allow three.

I switched to YouTube TV several years ago and have been able to watch I think every game; however, I do have a VPN to watch blacked out games on the ESPN app. There are now even VPN apps for streaming TV setups, so you can watch on your TV and not your laptop.

Here’s a full explainer of ACCNX from a Syracuse site. It’s probably an indictment of the ACC that so many diehard fans don’t understand ACCNX and don’t realize they have access to it. 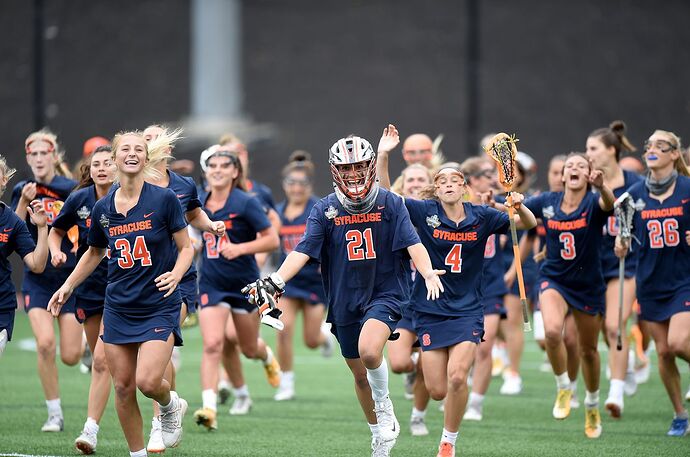 ACC Network Extra is not the same as ACC Network.

Thanks. However, I had issues with YTTV which I didn’t with Sling TV wrt to ACCNX. The most significant of which is that my LG TV does not have the ESPN app. As I recall, logging onto the ESPN site on my laptop using my YTTV credentials was fraught with issues. More often than not, I used Hoo_TV’s stream for the odd games. The fact that I might have been doing it wrong is more than possible. However, while I am not a millennial, I am perfectly comfortable with technology, and I found the Sling TV path much easier to negotiate.

That could be. I had always used a Roku on my TVs with no issues (even if the TV has built in smart/streaming functions, I find the separate streaming devices work better), but when YouTube TV and Roku had their hissy fit, I tried the Chromecast with Google TV, loved it, and that’s what I use on all my TVs now. The biggest issue is that the ESPN app will log you out if you haven’t used it in awhile, so I always have to remember to pull it up a little early before the game starts.