Amaka “Mox” Agugua-Hamilton comes to Virginia after serving as the head coach at Missouri State the past three seasons. She is a native of Herndon, Va.

I’m glad she’s got a nickname… Coach Mox is much easier than Agugua-Hamilton… but I’m sure she knows that.

I need to read more, but I think I like this hire a lot. Young up-and-comer (so affordable) but still has head coaching experience (unlike last hire) and has led her team to conference titles and NCAA tourney appearances. The fact that she is actually from Virginia is just a plus.

If I have one concern, it’s that she took over a program that was doing well and has only been there three years, which is different than turning a dead program around, but hopefully it works out. Exciting.

Exciting hire given all the negativity around the program right now! Glad we found a coach who knows the commonwealth!

Based on no inside knowledge whatsoever, I’m optimistic about Coach Mox!!! Would love to see UVA WBB in the NCAA tournament again.

I’m a Tammi fan from way back but this is the Coach that I wanted. She is a Grand Slam hire!

She’s a great hire. Knows here stuff in and out X’s and O’s did a good job recruiting and maintaining at Mizzu St. Life long player and coach she will do well with the resources available to her in Charlottesville. 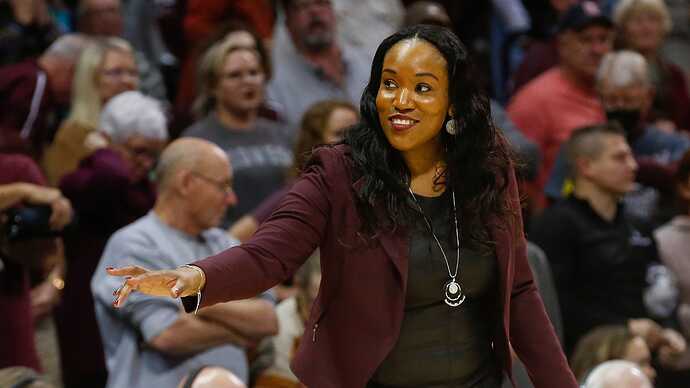 Wheeler: Coach Mox was everything the Missouri State Lady Bears needed her to...

You nailed it. She appears to have proven her coaching and development abilities. Recruiting with our facilities and the ACC shouldn’t be a hurdle for the program. Honestly, she was who I was hoping for since Tina was fired! We are very fortunate!

I like the hire. Seems to hit all the key points.

The Boyle hire not working out still perplexes me. Successful P5 coach who also was successful at the mid-major level, ACC regional ties, wasn’t working with an empty cupboard at the start either.

And then the Cal teams after she left were awesome and she recruited at least some of those players.

Without looking, I’d guess P5 to P5 hires are rare and unsuccessful ones are even more rare.

And a nice video they pulled together:

Got to be her first target. Was a rotation player at ND recruited by Muffet who retired after her first yr. Love to see Sam back home. Knock down shooter.

I remember her in high school. Wasn’t she one of the best players in the country?

I don’t claim to follow WBB recruiting that close, but saw something on Twitter yesterday about a 2023 4 star from Louisa expanding her recruiting based on recent “coaching changes”. Hope that means we’re now in the mix, where we weren’t before.

Wasn’t she one of the best players in the country

Consensus top 5. Several rankings had her as the #1 overall recruit.

Yup Mcdonald AA Gatorade player of the year. She can shoot. Got caught in a log jam of talent at ND