Last week I went 4-4 looks like I’m on the rebuilding path. On the season I’m 19-25, and still have time to make something out of this season. Plus, we have a night game for the Hoos this week, so you can expect me to be chasing all evening long.

Texas A&M -19.5 vs. South Carolina
Jimbo and his boys are rolling. Last week felt like a possible letdown but the Aggies fought through it. 19.5 is a big spread but I’m not shying away from it because The Gamecocks are downright awful and battling injuries. Texas A&M -19.5

Oregon +1 v. UCLA
Oregon is the ranked team here, but they are a dog on road. Last season UCLA gave the Ducks all they could handle in a narrow loss. This year it’s going to be another close tilt. Oregon still has a lot to play for this season with their loss to Stanford feeling like months ago. I like the Ducks to fight and pull it out. Oregon +1

Ole Miss -7.5 vs. LSU Under 76.5
LSU is a bit of a dumpster fire which is an odd thing to say six days after they picked up their biggest win of the season, one that should have been a season saving victory. However, 24 hours after knocking off ranked Florida in Death Valley the Tigers announced they will part ways with Coach O at the end of the season making him a lame duck coach of a team that reports are saying was already losing faith in him. It’s tough to see the Tigers getting fired up for a second week in a row. Meanwhile, Ole Miss may have some concern around Heisman front runner Matt Carrol’s health but he should be good to go. If the instance that he is not 100 I like the under 76.5 as some backdoor insurance to coupled with Ole Miss covering the -7.5

Wake Forest -3 v. Army
We are full steam marching towards our Wake Forest v. Pitt for the ACC championship in December. Saturday Wake gets an out of conference game against an Army team that is in a bit of a rebuild. We all know they are going to run the ball, and control the clock, but Wake’s offense in just explosive enough and the spread just small enough that I feel the Demon Decs cover. Wake Forest -3

Washington vs. Arizona Over 46
This has little to do with the Huskies and everything to do with the Wildcats losing 18 straight. If you can find the spread in the UW -14 range I say take it, everyone I’ve seen is in the -17 area and that’s at ad too much. But I don’t see these two combining for a ton of points.

NC State -3.5 vs. Miami
The Hurricanes are oddly similar to LSU, only their signature win is against App. State. The calls for fire Manny Diaz are loud in South Beach, but there’s likely not much the administration can do about with two other coaches still being paid buyouts. The result is a banged up D’Eriq King, (I think I played him in HS 20 years ago) and a Canes team that is fundamentally bad and likely to check out after their best effort of the season came up short last week against UNC. I bet against NC State week expecting them to falter, but they blew out BC, this would be a perfect opportunity for them to let me down. NC State -3.5

Notre Dame -7 vs. USC
I have no idea why I’m even considering this game. But Notre Dame is healthy for the first time in a few weeks. And now that they got their bad game of the year out of the way against Cinci they can resume steamrolling their handpicked schedule. On the field I really like Notre Dame’s secondary they are a solid group that force turnovers. The Irish weakness is in the trenches but USC favors an air raid attack and will likely be unable to take advantage of the Domers weakness. Notre Dame -7

Virginia v. Georgia Tech +6.5 Over 64
Geoff Collins is building something that could be special down in Atlanta and the Yellow Jackets are 3-3 on the season which a legit possibility to make a bowl game. If they want to reach that goal, they must take advantage of the winnable games, and Saturday night they have one of those games. Bronco has built something in Charlottesville and the Hoos are now 5-2 and coming off a dominate win against Duke. Even I cannot deny the potency of the offense with Armstrong slinging the ball all over the field. GT is an improved program, and looking to take the next step, they knocked off UNC at the top of the season, and Collins has them believing they can compete and win in any game. I like them to keep this one close, with another Cardiac Cavs finish. I also like the over here. GT +6.5 Over 64.

I got Hoos -6.5 and over my brother. Fresh has been sucked all the way in based on Tech Citadel 6 minute highlights!

Been thinking about this since yesterday and I’m doing it Okie St straight up agaisnt Iowa St. Okie St is a 7 pt dog

I may ride with you there

Wait Miami is still paying off two buyouts? No wonder they have to keep Larranaga

So, as somebody who has never bet on sports before, what apps or services do you guys use? Don’t know that I will, but was curious. And is what you use dependent on what state you live in?

If your state hasn’t legalized sports gambling you have to go to an offshore book, which may require getting paid out through crypto and can be annoying to get verified. If your state has legalized it there are a host of options. The move there is probably to open accounts in a bunch of places to take advantage of their first time customer deals, but you gotta pay attention to the fine print on those. If you just want one FanDuel is very intuitive

About 12 or 15 states have it legalized now and Id do what @norfolk_hoo said sign up for draft kings and all of them they all offer great signup bonus money. The offshore stuff gets real shady nowadays and can be hell getting your money out

Yea they are all types of screwed for money.

@MaineWahoo As somebody who has bet a lot of ballgames I can tell you that I am sure there are bookies near you just waiting on your call and your money, lol

Ha, I’m sure they would. I’m probably not going to dabble because I could see that not going well at all, but who knows. Maybe one day. 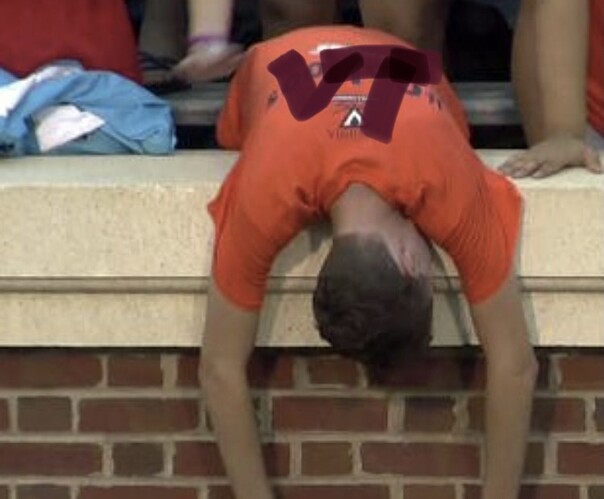 Illinois vs Penn State has me mesmerized. First to gain 3 yards wins. Not sure it can be done. I’d knock PSU out of the top 25 just for being a part of this.

Please tell me our game is on TV and not ACCN

Illinois vs Penn State has me mesmerized.

Also, why the NFL hasn’t adopted NCAA OT rules yet I don’t get. So much more fun. At least to me.

I was just looking at that result on the scoreboard and thinking it can’t possibly be right.