It was recently suggested to me that I provide some more information on the x and o’s that I discuss in my articles for those that may not now of them or have a great understanding of them. With that in mind, here’s a breakdown of the Virginia basketball Continuity ball screen offense.

It starts with a ball screen on one side that is cleared out except for the two running the pick and roll. There are then two ball handlers on the alternative side, with another big at the elbow. If there is nothing to attack off the initial screen, that big man at the elbow pops out for the ball and sets a screen for one of the ball handlers on his side, while the other clears out. Essentially it continues like that until a ball handlers decides to attack off a pick, by either driving to the hoop, dishing to the man rolling, driving and then kicking, or among other options, pulling up for a jumper. Here’s an example that I annotated:
(please excuse my atrocious attempt at drawing)

Here, Diakite sets the first pick, Guy clears out the back side, Clark uses the pick but doesn’t attack. Hunter pops out at the top of the key. 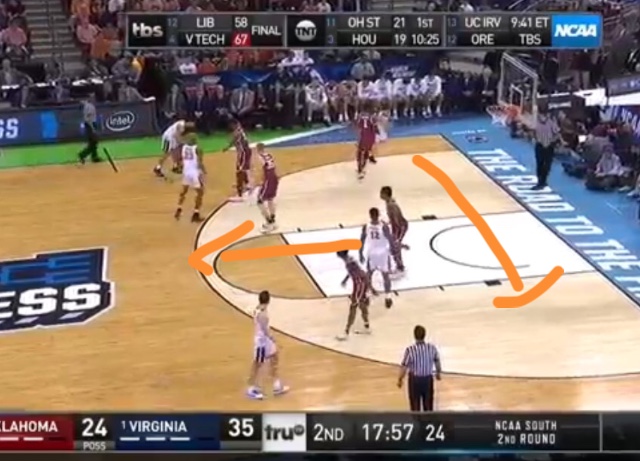 Next, Hunter catches the ball, Jerome clears through, and Guy steps up to receive the ball from Hunter. 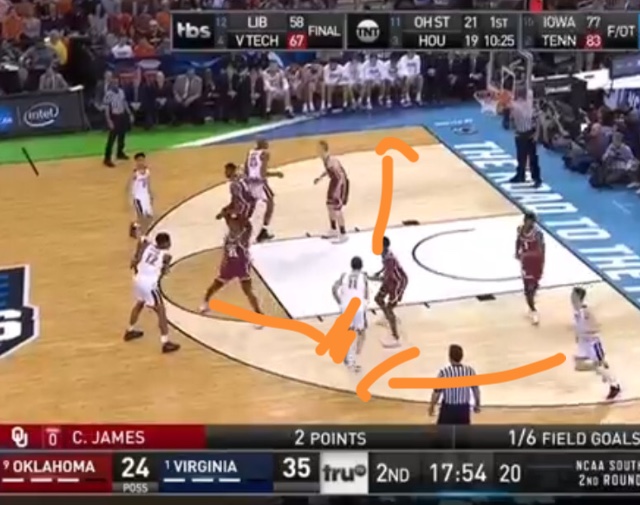 CBS (2)640×505 105 KB
Hunter then sets the pick and rolls. Guy uses the pick, but again, doesn’t attack and Diakite pops out for the pass. Clark clears through. 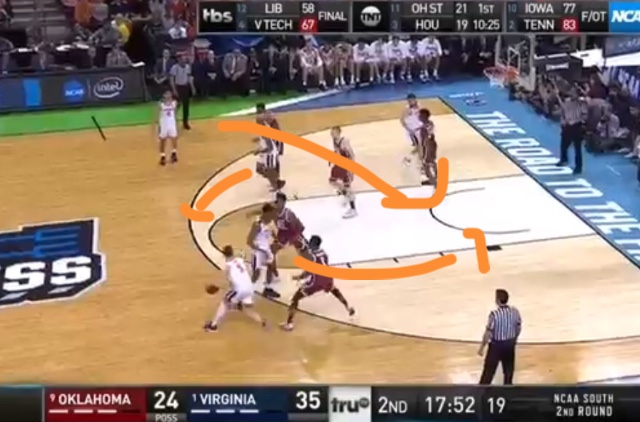 Guy passes to Diakite, Clark clears through, and Diakite transfers it to Jerome and then sets the pick. 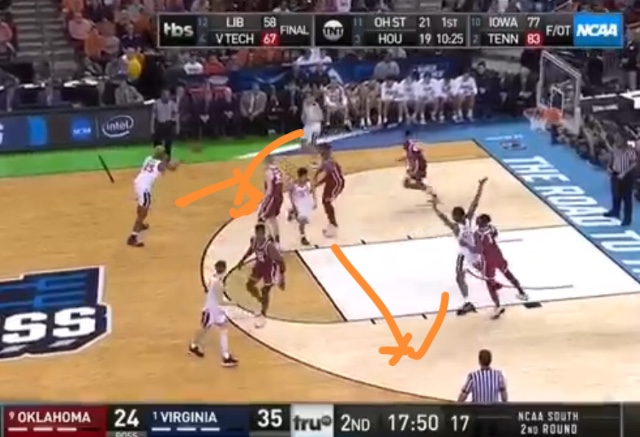 Diakite slips the pick, and loses his man in the process. Jerome then feeds Diakite on the backside for a nice floater right in the heart of the paint. 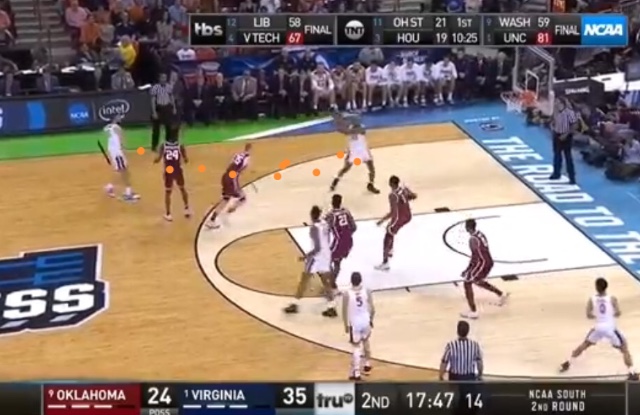 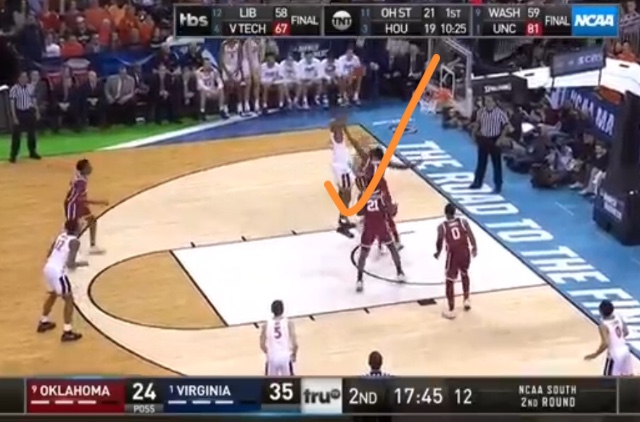 Here’s a video of this offense in use:
https://www.youtube.com/watch?v=2BbhcLj-M2M

Really good work especially follow up with videos. Now can someone tell me what a blocker mover is?

This was great. Thanks!

I really enjoyed this. I actually may have learned something, lol

I also want to add I really like this offense. Now if I just knew who it does work against and who it dont and why.

writing something on that right now… little preview: it hasn’t been working…

Love this. Im a football guy and know Xs and Os like craxy but really enjoy learning how the sausage is made on the hardwood.

This is implementing ball screens into motion offense basically. Seems like it really makes the defense expend lotta energy continually. but also keeps big men out of the paint on offense whether that is good or bad.

Right, the purpose is too keep every defender moving. Issues arise though when it can’t be executed quickly and fluidly enough. Also, when the defense isn’t worried about our shooters shooting over them, they’re willing to go under the screen and protect the paint from the roll or the drive. What compounds that is that when we can’t beat a defender when they over extend, the defense can extend off ball (as in away from the screen) and be disruptive to the transfers.

Purdue in first half defended it all perfectly. You need 1 or 2 guards that can manipulate the defense and understand angles. If you have 3 point shooters the most dangerous Guy is the one clearing out and changing sides of the court cause he can kinda hide. Kyle Guy was that player hunting shots.

Exactly, and that’s where the issue arises this season. While Morsell has been decent at hitting a pull up jumper, and had a few nice drives of the CBS in the ASU game, he seemed tentative against Purdue/UNC to touch the paint. Stattman and Woldetensae don’t have the strength or ball security to use the pick effectively. Kihei’s an adept passer out of it, but his lack of height makes it difficult to finish among the trees. Will help this offensive scheme when Key returns, as he’s a big enough body with enough ball handling to get inside and finish. Seems like Kihei, Key, and Casey all have certain skills in attacking those wing screens, but not quite the whole package. That’s part of the reason they’ve gone back to the mover blocker. I’ve got a piece that’ll likely be posted on the blog in the next few days talking more in depth on this.

Really good work especially follow up with videos. Now can someone tell me what a blocker mover is?

This video has a good breakdown: https://youtu.be/dNIXs2DJxF4

@adventive. Thanks for that. Makes sense now just always thought of it as wheel motion and didnt realise was B/M. Feel like this offense fits present team better until we get guys handling the ball better across the board.