Four Takeaways from the Syracuse Win 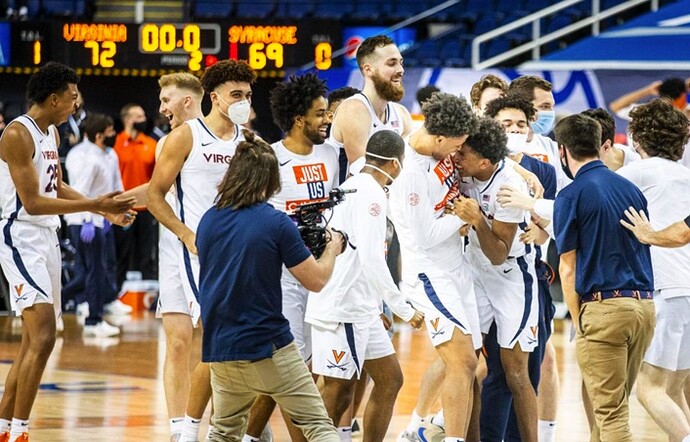 UVA pulled out a late win to advance ACC Tournament Semis. I have five takeaways for the ‘Hoos as they head deeper into postseason play.

Lol more of a “I have nothing else to say and a Nets game to cover right now,” than anything else

Regarding the press issue, anecdotally it seems our inbounding has been dicey at all sections of the court this year. Does anyone else feel this way? If it is a thing, what’s the culprit? Relative lack of foot speed? Inadequate practice time? Predictable sets? Combo of all of the above or something else?

My take away is Coach B is a whinny, grumpy old man. Excuses and crying about the officiating. Hey Jim, how about the 3 fouls and 4 free throws you were gifted in the last 90 seconds???

"I thought we played great. I thought it was just – Kadary before the game said his knee was hurting, told Brad Pike, our trainer, he didn’t know if he could go. This is the same thing that happened once before. I told him let’s give it a try. He seemed all right. He must have been – he didn’t seem quite like himself, but he didn’t complain about it once the game got started.

“But again, it was just a great effort. I can’t even describe Buddy’s play. They had a guy all over him the whole game. They were holding him and pushing him the whole game, and he was tremendous. I mean, you couldn’t ask anything more out of a player than what he gave us today. I haven’t said much about him because I think his play speaks for itself, but I mean, he was phenomenal today against that team, absolutely. Absolutely phenomenal.”

I’d have to rewatch to be sure, but I think Syracuse’s press (and maybe the last few other presses we faced) sells out to stop the inbounds and trap the first pass, because every time we’ve gotten it in and made one pass out of the corner, there’s been a man advantage down the rest of the court.

Syracuse also has a ton of length with those guys they recruit to play the zone.

There’s also an old basketball adage holding that teams that play zone have an advantage pressing. They’re use to defending space

I can’t stand either boeheim but I gotta hand it to lil buddy he played great.

I’m with you all the way. Buddy’s smirks are annoying as hell, but he played his ass off yesterday. If you don’t respect and appreciate that performance, then you don’t like basketball very much.

I actually enjoy the elder Boeheim’s grumpy streak sometimes. And I’ll always appreciate what he said about UVA and Tony after UMBC. In Tony’s postgame presser, he even noted when asked if Syracuse should make it into the NCAA tournament “Boeheim would fight for us to be in it, so I should do the same for him” or something like that. Anyway, he’s a character, but there seems to be mutual coaching respect despite whatever he says about a specific game.