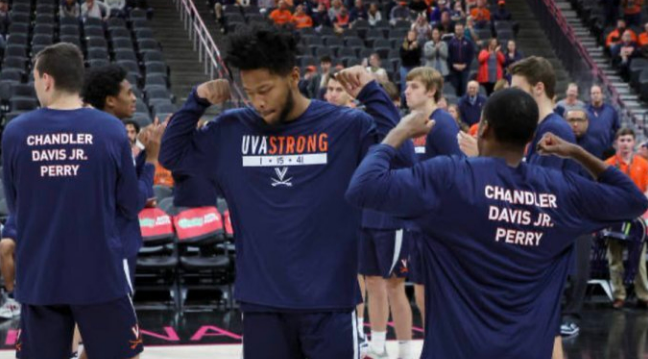 Virginia and Illinois, both fresh off wins over Top 10 opponents, will face off in the title game of the Continental Tire Main Event.

What’s the defensive plan for Shannon?

Their other guards dont scare me

Edit: damn @HooDat with the .3 second buzzer beater on me

Kihei is gonna be the key

Do they players get any type of swag for winning these early season tourneys? I’m sure they get shirts and hats but anything besides that?

Tons of swag. Man these kids were just touring Italy now they are in Vegas. That Blacksburg trip is gonna be lit!

Gotta be honest. I think we are a much better 3 point team, but we won’t keep shooting at this clip. This game feels like a natural point for a dip. Really hope I’m wrong.

I think you are wrong. Not wrong wrong just not right ha

Shooting is contagious. - when you don’t worry about it going in, it tends to go in, which makes you less worried, so it tends to go in even more. We can’t keep up a 50% clip, but 40% as a team with the shooters that are taking the 3s is more than within reach.

Gonna watch Jayden Epps in this game. VA kid playing against UVA. We know TB & co. didn’t recruit him so does Epps internalize that and tries to show out? Currently averaging 10 ppg in 24
Mins.

This is very true

What I wanna know is: Is Kadin’s midrange game for real? If he’s gonna be reliable there now that’s a great addition to his game and our offense.

Imagine Kadin faking a midrange, getting a jump, and posterizing someone.

Illinois features 3 freshmen and 1 sophmore on the perimeter. And they have been prone to turnovers and erratic play. Meanwhile we throw exerience at them in the form of elite defense by Clark, Beeks, and Armaan. Along with the support of our hard hedging. I think this is where we can break them down.

The back line just has to hold the fort down.

Time to show that Friday wasn’t a one off. I suspect they are gonna be keyed in on Franklin. Today’s gotta be the day where Gardner finally gets going to help free up the guards. Go Hoos

I suspect they are gonna be keyed in on Franklin.

If they key in on Franklin, won’t McKneely & BVP be wide open? Great to have more than one player who can shoot from deep.

@system Can you create an in-game Channel for tonight?

Imagine Kadin faking a midrange, getting a jump, and posterizing someone.

You mean the patented Huff move?