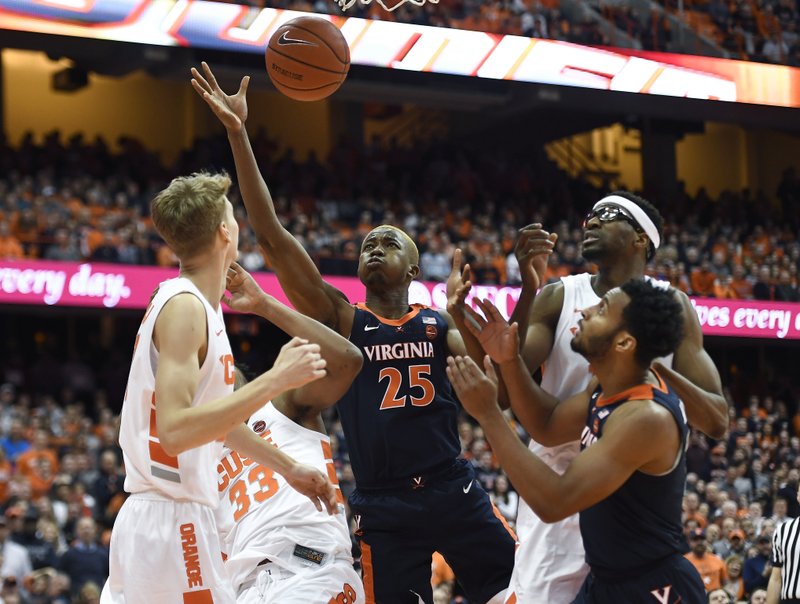 For just the second time in his 44 years with the Orange, Jim Boeheim’s team this season will feature zero seniors. In what seems to be a rebuilding year for Syracuse, four starters are gone from last year’s team that went 20-14 and got bounced by...

Virginia is an incredible 10-0 in ACC openers under Bennett. He’s 6-2 vs Syracuse, including 3-1 at the Carrier Dome.

The total points prediction seems pretty fair, could even discount each score a couple points due to early season/figuring the new 3pt line out. Bart Torvik, stats guru, had the first day of games as one of the lowest efficiency days since 2008, and was speculating that the new 3pt arc played a role in that.

From a statistical standpoint, Syracuse checks in somewhere between the 50s and 80s in most preseason statistical projections. They have just a little bit more in terms of returning minutes compared to Virginia, essentially in terms of 3 rotation contributors (Hughes, Boeheim, Dolezaj), with Carey and Sidibe as lesser played returners. They have a solid freshman class, but broadly speaking, no one with the recruiting profile of being an immediate efficient starter (defined in this excellent piece on projecting player performance from a few years ago).

How the offensive burden gets divided will be interesting, as Hughes and Boeheim profiled last season as spot-up shooters who didn’t have a lot of shot-creation responsibility, Dolezaj was super low-usage, and Carey had high usage in limited minutes but was not efficient. Last season, they kept their poor-shooting offense afloat with free throws and offensive rebounds, but their main weapons in those areas (FT: Brissett, Batttle; OR: Chukwu) are gone.

Their defense has been good every season for the last 10 seasons except for the 2016-2017 season when they had a good offense but average defense. My baseline expectation is that it will be good, but maybe not quite as good as last season due to not having a lot of returning minutes.

In terms of Xs and Os, I’ll believe that they’ll play man-to-man when I see it, as they stuck to zone even while getting flambé-d by Virginia last season in the 2nd half. Otherwise, it’s hard to figure out what the tactics will look like. Will the staff go for keeping 2 bigs on the baseline and dribbling out of the post again? That tactic really benefited from having 3 lethal 3pt threats on the floor. Maybe some ball-screens to get Kihei with the ball into the middle of the zone? Hard to say, but I’m excited to find out!

I’m curious how this team is going to look. So many questions. The Zone and new 3 point line. plus Jay Huff…how will he perform vs the zone?

And of course the biggest question…will there be a Greg Anthony cam during our game too?

Did you all catch Kody in the background throwing down that reverse dunk in the layup line? Bounce…

Only took 7 minutes to get all 8 guys in.

Yeah…this is November basketball. Syracuse is really effectively denying the high post, which they can do more this season because they can afford longer close-outs on our unproven shooters. On the plus side, the defense looks solid and/or Syracuse’s offense is…rough.

Getting some traction with offensive rebounds. I think that’s going to be really important for an efficient offense, given the shooting challenges. Diakite, Key, Huff are all plus offensive rebounders, and preseason reporting indicated that McKoy gets after the glass too.

I’ve never seen a guard that blocks as many jumpers as Casey Morsell.

He’s notably been on Hughes the most, I thought Key could end up getting that assignment, but Casey’s looked good on defense, very sound and balanced.

Phew, gotta do something about the turnovers!

Great half from Jay Huff. Mamadi I thought forced a few things but he’s been solid overall. Key and Kihei doing what they do. Morsell some bright spots with mistakes sprinkled in. Stattmann is just kinda out there. Tomas and McKoy both struggled badly.

Has kihei played the entire time?

It might not be a pretty game, but this team is looking like they still have that trademark toughness; I almost take it for granted at this point, but the new guys look perfectly fine with the physicality of the game.