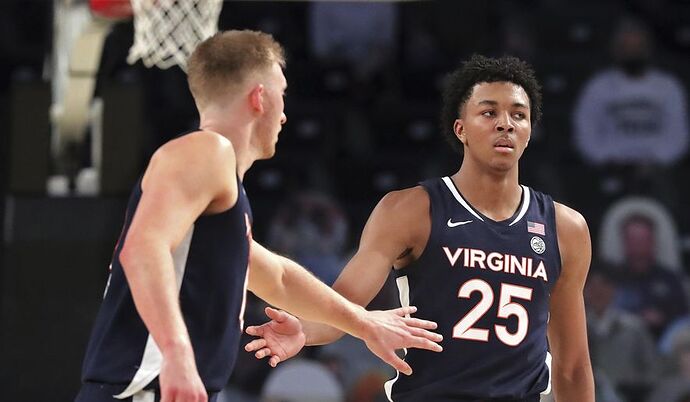 This Spring is expected to be wilder than ever. Virginia won't be immune. Next year's roster is already in need of patchwork

It’s going to be a wild ride, once the season ends!

If CTB brings in another 2G or wing other than someone at Keels level it will be an indictment of his prospect evals the last two years - Casey Carson, Taine, and Jabri. One of the four has to step up as ACC level starter and scorer next year for us at the 2G position. If none of the four are capable then Coach has a recruiting problem he needs to figure out and fix. Same for the frontcourt. One of the 3rd year players Shedrick or Caffaro should be ready to start. Murphy has the size but doesn’t seem interested in banging down low. Another capable big man is clearly most important hole in next years roster.

This kind of post sorta exemplifies what I think it’s a misconception among a good portion of the fan base. There does seem to be a recruiting problem that is making itself apparent the past two years and potentially next. But, it’s a product of the struggles in the classes before the national title. The only two players that you listed that are upper class men are Morsell and Caffaro. It would be unreasonable to pencil in Carson, Taine, Shedrick or Jabri automatically into a starting spot. Carson, Jabri and Shedrick are coming off major injuries or health problems. And Taine is going to be a freshman transitioning from overseas. And I am not sure Caffaro was ever recruited to be a mainstay in the starting 5. Which only leaves Morsell, which yeah that’s not gone great, but it’s hardly an indictment on the past recruiting because it’s one player.

I just think there’s a lot of misplaced angst about recruiting right now. Recruiting has gone exceptionally well since the national title. Sure, we missed on our big 2021 targets, but we also really swung for the fences. And even 2021 may not have been a miss had CTB gotten to find his hidden gem without Covid. The 2022 class looks great so far, as were in a great spot with our early targets. Recruiting is fine

So I think filling in those classes before the championship with ready to play seniors/transfers for next season, similar to Trey Murphy in ability if possible would be ideal.

Now keels fixes a lot of these problems

we missed on our big 2021 targets, but we also really swung for the fences

They “swing” for the fences at one spot guard because they had to. Most players had no interest in coming in behind the 3 2020 guards. Which by the way is exactly what they did in 2017, when it landed on Marco Antony in the find em late category. Just putting things in perspective. Recruiting is never an even playing field. You have years where everything is on the table and then years when you have to aim narrow.

We always look at the year players are signed and only talk about that as “recruiting classes” but truthfully class is a terrible way to look at overall roster building. It’s continuous. Our senior class, the 2017 class in essence, is pretty strong when it matters as upperclassman because of redshirts and transfers.

There’s an argument to be made that they could have done better than Tomas a couple years back as the Marco replacement but they had some limitations there because of the early entries. They were only open to short term players to protect status with Beekman and Jabri.

That along with Casey being behind schedule puts us where we are with guards. Two guys in back to back generations of one role that are decent players but haven’t popped into stars. The other hole is the one left by Badocchi and really only is a problem next year, where they’ll fill it. I know people complain that we don’t have this Akil type player right now but truthfully with Huff and Hauser it would take Mamadi himself to make it worth putting one of those guys on the bench.

Other ACC teams have capable starters as first or second year players. Next year if 3rd year Morsell redshirt Jabri and Carson and first year Taine are not ACC level starter (at least one of them) then my opinion will be CTB is missing on player evals.

I mean we have a first year guard starting and that was TB’s most recent #1 target currently on the roster.

So by that logic Deandre Hunter was a eval miss?

How are the chances with Keels looking? It feels like his recruitment has gotten more important with all the guard struggles.

It’s also worth noting that if Morsell is the shooter in college that he was in high school we’re not having this conversation.

Id like the NCAA to smack Louisville and us get Whithers to transfer as our PF. Love his game.

To be fair Morsell was never a catch and shoot player. His 3s are the kind our offense doesn’t really generate nor does he feel he has the trust to shoot. Of course in terms of the psychology Id say its 70% on him/30% on the staff with the short leashes and how they define a “good shot”. Of course we shouldn’t be playing streetball chucking but what defines an optimal or good shot really is a fluid definition that also depends on the player’s comfort.

Casey played a lot last year (similar to Ty, Kyle and Malcolm as freshmen) and started more games than they did. He shot a lot and obviously was not good last year. There has been some improvement this year but I really think he just may not be a good shooter as a college player. Still time if he’s patient but I’m starting to get skeptical.

Starting to?? You are a very patient person! Lol

He needs to be a volume shooter and we develop efficient shooters which NBA GM’s love!

Hunter is Not a good example. Redshirting first year primarily because of an injury and was a very solid contributor in his 2nd year. Came off the bench but was on the floor late in most games.