We know Tony has gone after a few OADs over the years but clearly he was more comfortable going after longer term projects knowing he could have them for 4-5 years. He could always count on the time to develop a raw player. I wonder if the recognition that many of our best 3-4 year players would have potentially transferred out in this era will cause him to expand the number of 2 year guys he will pursue? Maybe he is already there? Will he explicitly make the portal a recruiting strategy? For one, I am glad to hear Tony acknowledge this. Because the landscape had shifted significantly and it felt like we were a bit behind in reacting.

Im pretty sure there was a video of Kyle Guy either right before he committed or right after he committed where he said he wanted to be a 2 year player in college.

I think the 2 year means = at least heavily contributing by year 2 so that they stay longer cause they are buying in more cause of the bigger role. Not gone in 2 years.

Yeah, I generally think Tony has to get more used to kids cycling through a bit more quickly – for various reasons. All of his interviews make it seem like he’s thinking about it some and how to adjust without giving up his core principles (or pillars if you will). But the real proof will obviously be in his actions going forward.

As Bart said to Rabbi Krustofski: “At all times let a man be supple as a reed, and not rigid as a cedar.”

Not sure really sure how anyone can identify a “2 year” player. I feel like there’s a small group of clear one and dones and then everyone else

TJ Power looks like a 2-3 year player to me.

I don’t think he’s really getting at wanting 2 year individual players. Think he more means you have to think of roster management in 2 year chunks rather than the 3-4 year cycles of the past.

Think he more means you have to think of roster management in 2 year chunks rather than the 3-4 year cycles of the past.

Right. Think this is why we see a little more recruiting to so called crowded positions. Except point guard. And center. So…nevermind?

I think the quotes imply that his recruiting pitch has to be that the guy will be a contributor by year 2 even if he sits on the bench much or all of year 1 whereas in the past he could sell the opportunity for playing time by year 3-4 after 2 years on the bench.

I took the 2-year quote to be mostly about succession planning. You know the little charts everyone likes to make that show “Here’s what the roster will look like in 2024” and you see the Isaacs as third-years, etc., and you look at that and figure out who you’ll need to have brought in as underclassmen at that point to fill in the gaps. Tony is acknowledging that you can no longer plan that way. You have to have a shorter time horizon and reset the view more frequently. You still recruit guys that you hope to keep for 4 years, but you don’t pretend you have any real idea what things will look like in those 3rd and 4th years (for that player or the team as a whole).

In the article where TB asked former guys (presumably current pros) if they had ever considered transferring, and would they have under current conditions, and half said yes/ proly/ maybe. It read like a big eye opener for him so that proly has factored into him thinking in 2 year increments as well

The very fact that he polled the old players on that question is really encouraging. It tells us that he’s decided to proactively figure this thing out, not just muddle through and kinda adjust at the margins. We all like to joke/gripe about him being set in his ways, but in this case it seems he’s fully aware of how significantly the “personnel game” has changed, and dammit he’s gonna figure out how to win it.

Imma guess he already knew the answer. So just wanted to confirm it. Also, every player semi considers transferring at some point. Kinda like every kid says they are gonna “run away” at some point.

Everything I’ve read and heard via podcast with Tony seems like the changes in college athletics have really lit his competitive fire.

That’s a really good thing for us fans.

Most important takeaway from all of this. He’s looking it as a challenge rather than a reason to leave the game

This is a great take by you and @Hoos9412 that I hadnt considered. Few years ago at lunch I asked TB if he ever considered coaching in the NBA and his eyes instantly lit up and he talked about it with that sense of competetiveness… similar to what yall are saying here

Kinda like every kid says they are gonna “run away” at some point.

Now I’m just imagining Tony walking outside in the woods behind JPJ and finding De’Andre, who had climbed up into a tree with a backpack filled with granola bars and a single change of clothes, and saying “Are you ready to come home now? I promise things will start to click for you offensively soon” and then they both walk back to the locker room together.

Are you ready to come home now? I promise things will start to click for you offensively soon

Nah - it was: “Are you ready to come home now? I promise you’ll be putting Joel Berry on a poster soon.” 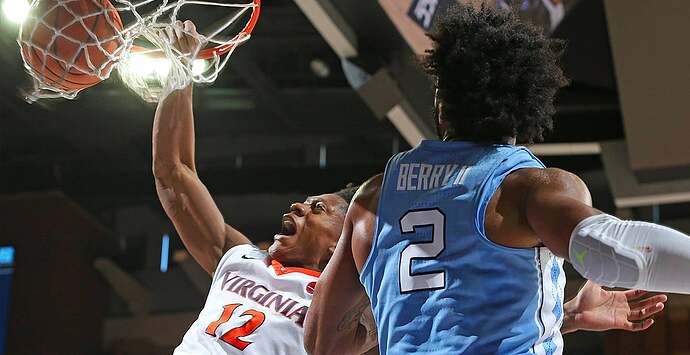 That happened. It was on the news.

Edit: I cant get this outta my head now