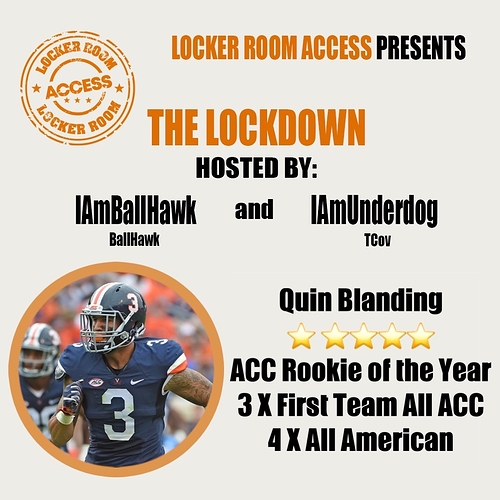 Join Tcov & the Ballhawk on this week’s Lockdown with All American Safety Quin Blanding. As one of the most decorated players in UVA history, they guys walk through his career and discuss the pressures, the ups and downs. Quin also breaks down...

SMH!!! I must say the ending was phenomenal. We heard from Quin. He was able tu share his post UVA career without the corny jokes and interruption. It really made me feel for Quin and it captivated me. I felt very emotional listening tu his story and Im glad I Listened tu the entire podcast. Because the first 15 min had me SMH. I REALLY enjoyed listening tu he last 40 minutes. Great stuff. GARD, I hope Quin show these cornballs he can play in the NFL. With all the top football people in Tidewater. You would think they could help. Im even thinking about hitting up My boy Plax. I mean somebody should be able tu help him, you would think. Because there isnt any doubt Quin can play. I hear UVA fans say he was tu slow and should play linebacker. I dont know football like them. But you cant deny tape and productivity. Quin have both in my opinion.

One of the recent greats and favorites!

No, I dont know Quin.

I shared a little bit earlier. Im not sure you are ready for my reply BUT I ALWAYS KEEP IT REAL. LMAO. I enjoy how you and Mark allow the guest tu be front and center. It also feel more authentic. This podcast feel like an act TU ME. I dont think they are being objective. Tu much pandering with the guest. Its tu much of a love fest. I want more hardcore stuff. I feel like they will always agree with the guest and dont question anything. I also think these tu are tu involved. I would love tu hear less of them and more of the guest. Like the last part of the podcast. That was AWESOME TU ME!!! I think alot of things could have replaced the movie portion Or Stories from their career Or some of the chit chat. Even tho I know, I would have loved tu hear why he believe more in Bronco than London. Do he think Tenuta style of coaching was helpful. Do him or any of the other tidewater players regret picking UVA. Why did he commit as a junior tu UVA. Do he think London got a real chance and a fair shake at UVA. Did he think about leaving when London left. Did people tell him he should leave. Is he interested in coaching. Do he speak tu London. Did London have control over the football decisions and his assistants. Who idea was it tu play 3 QB against Tech. Why do he think they got blown out in the bowl game. Other than Ant, who else helped him at UVA. Did the players feel like London was under pressure. Did they think he wasnt ready tu be A power five coach. What was his first opinion of Bronco winter workout and how was it different from London. What did he think about the jersey number draft. Why was he playing at 218 and not his combine weight at 205 his sr yr. Do he think if he played for a top university he would be a pro and why.

This is not my podcast and I stop listening after the Smoke segment. You asked me for my opinion. I am not telling or asking anyone tu change. I just think we as people of color LOVE tu show we are cool and down. But its not necessary. Stuff like trying tu use the modern day slang. The one thing about me and this is me. I will talk tu A CEO the same way I talk tu a crackhead. The only difference between the tu IN MY OPINION, are their title. They are both men or women. So things like that turns me off. Now thats me. You asked me or I would have stayed quiet. Thank You

Appreciate your feedback and I also understand everyone isn’t going to like or agree with how we conduct our conversations with each player. This isn’t an interview, it’s about sitting down with our friends.

Much respect. Im Just sharing fam. I wish y’all nothing but success. Please continue how you rock on your podcast. Its all Love My dude. Good Luck and thanks for the opportunity tu share my thoughts.

I also want tu add, These tu men work very hard tu bring us entertainment and for free. I want tu take a step back and tell them Thank You. Sometimes you forget the end goal at times and I definitely did that regarding this podcast. I am not here tu bash them. Sometimes me keeping things real, could be delivered better. The last thing I want tu do is bash tu men of color doing positive things. Especially during these times in our country. I normally keep it moving after I share my opinion. But this time Im not doing that. I am wrong how I delivered my opinion and I never meant tu bash y’all efforts. Thats from the heart my dudes. Good Luck.

I didn’t see it as being negative. I took it as motivation to have you singing our praises later down the road.