The Competition for Keels 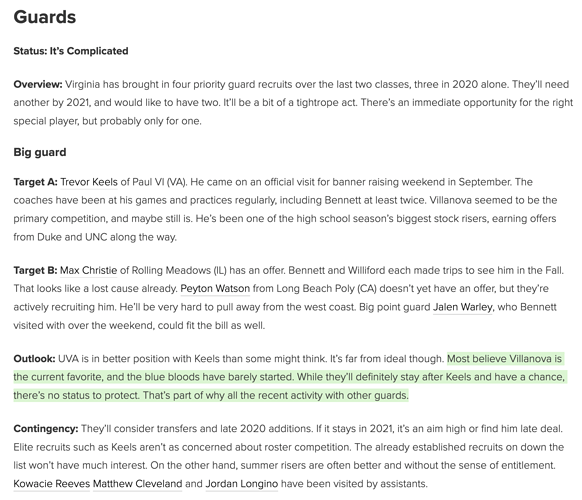 Screen Shot 2020-04-19 at 6.43.24 PM1766×1516 400 KB
So I’d like to start a conversation. The above screenshot was from HGN’s “State of the Trail Report” from February 4th. I found his “Outlook” paragraph particularly interesting. I highlighted a couple lines that reflected the overall sentiment he described at the time, although he also wisely stated that “UVA is in better position with Keels than some might think.”

Since then, seems like the competition for Keels has been continuing to trend in our favor. We got a crystal ball prediction from Dain Erven for UVA on February 21st. And now, two short months later, even the most bias of Villanova fans(aka Leader Johnson) is now saying he is Virginia bound. But what has changed in two months? Or perhaps the question should be what hasnt changed in two months?

I don’t exactly have your answer but we can put a timeline on it.

Bennett always stays the course with their early targets until Spring live periods (now) and then reevaluates. They want to see the end in sight by then. For Keels they have to win 2 battles. First they have to top Villanova as the best option for his long termish development. And also the more ideological battle for Keels to choose that route over the blue bloods. I wouldn’t count our chickens yet but yeah it looks like all of those things are going in our favor.

That is about the way I think it is too. I’m gonna throw something crazy out that I read a couple of days ago. Actually I’ve heard little bits a few time. There is a rumor going around that some Villanova people (probably not associated with the team) are leaking all this Keels stuff we been hearing lately for the purpose of causing problems between him and UVA. Am I crazy to at least listen to it and wonder?

I don’t think that’s crazy but as you said it obviously wouldn’t be coming from the team. I’m not worried about it though

There’s a lot of different rumors as you can imagine. Spurned coaches leaking a commitment is always the first suspicion. That’s often how it gets out. Not saying there was any truth to him even planning to announce, I don’t know that. People like conspiracies. My twitter DMs read like a tabloid some days.

There are a few other minor points that keep running through my head. None of them are quantifiable and could mean zero, or could be something significant.

1)It seems Keels is a UVA fan at heart. I still havent seen him in any UNC or Villanova gear. Thats got to mean something…the question is What is something?..No one seems to know…I think this point is very speculative and can very drastically from recruit to recruit, and situation to situation. But I dont think it is common for recruits to wear apparel of their home state team and then go play for the rival. There could be no better way to absolutely crush all the local fans than doing this. Just feels like in the back of his head, he knows where he wants to go already…just waiting for the right moment, or perhaps waiting to commit is a common method to boost name recognition.

3)Trey Murphy! So we landed Trey Murphy and it just so happened that the battle was between us and Villanova. Not sure what this could mean, but apparently one of the nations top transfers saw Virginia as the better school to develop and become a better basketball player. It also feels again like another huge boost in positive momentum. Also, didnt it seem like Leader Johnson and crew began giving up on Keels until after Murphy decided on UVA over Villanova. Could just be a coincidence.

4)Nothing has changed! So what I mean by that is both Duke and UNC have offered, and it has become old news by now. But after all those offers seems like the talk is still and has always been about UVA. Coach Bennett offered him 14 months ago, and Coach Bennett still wants him on the team. We have been after him longer than any other major program. Thats got to be in our favor.

So again, I like to speculate, and these points could mean nothing or something. Either way apparently the current sentiment universally is we are in the lead.

I think we are in a good spot with Keels. However I don’t think those points weigh as heavy. They are important. But Talented kids could care less about momentum. Heck it might mean more playing time for them and getting to be the big man on campus. Also Henry Coleman was also spotted in UVA gear several times.

I think what helps is that we have an in-state program for Keels that has shown they can make it at the big stage. Also the coronavirus might see a trend in talented kids staying home

I think mostly what “changed” was just UVA’s consistency, or Bennett’s more specifically. But I do think he’s a fan of sorts. Liked UVA from the start. When he did his official, one of the coaches from his AAU program was sharing a picture of Trevor and Efton at JPJ together. Someone asked if he thought either of them would end up there. He said yeah Keels. They’ve always thought it was a good fit for him. it’s just that they have to take everything into consideration, always a career decision at this level.