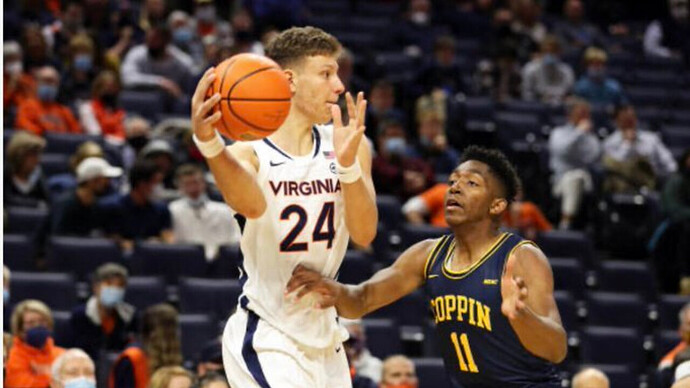 Virginia will face the Georgia Bulldogs on Monday night in the first game of the Legends Classic in Newark, New Jersey.

There is only one question about this game. Will Fresh actually be able to get tickets and not pay

These two games will be a good proxy for how do we against bad ACC teams (UGA) and mid-tier ACC teams (Providence / Northwestern). I know it’s a cliché, but we will know more about our team after these two games.

We may also know whether Tony is planning to experiment a bit more with roles and/or offenses or is going to try to squeeze every last drop out of current starters + sides.

In your backyard you gotta have a hook upside

These two games are also very important for any NCAA tournament hopes. Not to make them too big a deal, but if we lose to UGA, our resume is going to look extremely lacking when March rolls around. One bad loss - Navy - is maybe OK, as lots of teams will have them. The loss at a ranked Houston is certainly forgivable. But Georgia, Providence/Northwestern, and Iowa are the only remaining opportunities for anything that will be even slightly convincing to the Committee.

Part of me thinks we need to win all three, but if we finished fourth in the ACC (probably a lofty goal, but never doubt Tony when conference play roles around), maybe we could get away with only winning two? I don’t know though.

It’s a cliché because it’s true. When it comes to UVA, especially this year when our lineup has changed a lot since last year, we always have those games near the start of the season that really shine a light on the future of the season.
I have high hopes because the talent is there, we’ve seen it in bursts so far. We simply need to execute together and consistently.
Nothing is set in stone when it comes to UVA, that’s a given. However, this game is one that I see going in our favor.

I see another great game for Franklin and a couple other guys hitting double-digits.
Final Score Prediction: 60-55 UVA
Over/Under: 120

In terms of predictions, feel like I have to try and keep up the optimism. I’ve watched some of this Georgia team, and they are not good. They do have some athletes, and knowing how the world works, they’ll hit a bunch of shots they won’t hit again all season. But despite that, I’m going with 67-57 Hoos.

I just checked out the 2013 season when we last went to the NIT, and it was interesting. That team went 11-7 in the ACC which was good for 5th (tied with NC State but we lost the tiebreaker). That team had some good wins, beating Wisconsin (an 8-seed, but KenPom #12 at the time) OOC, and Duke (a 2-seed) on Harris’ epic night, along with UNC and NC State (both 8-seeds) in conference.

The team’s real problem was two-fold. First, it was a fairly down season for the ACC. Only 4 teams made the NCAAs (Duke and Miami as 2-seeds and UNC and NC State as 8-seeds), only Duke and Miami were even in KenPoms top 25 before the NCAA tournament, and 6 ACC teams weren’t in KenPom’s top 100 at season’s end. FSU went 9-9 in the ACC despite being ranked 120th by KenPom (their record doesn’t look like the KenPom 120th team, but their season in a microcosm: we beat them by 20 at their place, then they came to JPJ and won by 2. Their whole season was like that).

The point being, sure the team isn’t off to a great start and there are lots of parallels being drawn to 2013. But so far they’re mostly superficial comparisons. KenPom thinks the ACC, even in a down year, is much tougher than it was in 2013 making the conference wins look better (if we get them). Also, while the OOC isn’t off to a great start, Houston was a tougher team than anyone we played in 2013 (except Duke) and KenPom has them higher than anyone in the ACC (including Duke).

There still plenty of time for the team to lose bad games, but atm they’re still in better shape than they were in 2013.

What was killer about 2013 is we lost in the preseason NIT on campus game so lost out on the opportunity to go to MSG. Which means we got two crappy games instead of good games. They changed that the next year (of course), meaning the on campus games were extra, not for qualifying.

That’s totally fair, and I agree we definitely aren’t underwater yet. I guess I’m saying, if we want to avoid ending up like the 2013 team, an important place to start would be beating Georgia. Right now on Bart Torvik, Georgia is ranked 206. Losing to them would be worse than our 2013 loses to Delaware (164) and George Mason (125). We already have one bad loss to Navy (135), although it wasn’t nearly as bad as our loss to ODU that year (260). [Caveat to all of this is these rankings will change a lot by year’s end]

But to zoom out and generalize, that year we were sunk by three bad OOC losses versus one good OOC win (Wisconsin) and one half-decent one (Tennessee). This year we’ve already got one bad loss and no decent wins, and because they stupidly shrunk the OOC schedule, we only have six OOC games left to do anything. For good wins, all that is left is Providence/Northwestern, Iowa, and maybe at JMU, and none of them are as good as Wisconsin was that year. If we could get two decent wins, and avoid another bad loss, I think a 4th or 5th place finish in the ACC might be enough. But losing to Georgia would be a big big blow and make what we would have to achieve in the ACC schedule significantly more daunting.

Anyway, I think we’re basically in agreement. It’s still early and we haven’t already blown our leg off like the 2013 team ended up doing. I’m just saying these next two games are some of the only opportunities we have to pick up any OOC wins that rival what the 2013 team got and avoid a second bad loss.

The non-con framing is antiquated it’s all about racking up Q1 and Q2 vs not getting Q3 and more importantly Q4 losses. Georgia may fall in Q2-Q3 range on neutral so need to snag a win

Good point, although how all of us ACC teams do in the non-con influences our statistical rankings and thereby kind of affects what games are Q1, Q2, etc. But UVA’s results alone will have marginal effects on that.

I just always forget where to look up what games are Q whatever. Also, while the Committee can say whatever it wants about how it evaluates things, it’s been shown to repeatedly punish teams that have zero good OOC wins.

Yeah, if UVA sweeps the rest of OOC, they’re in fine shape. Though I suspect Iowa will fade as the season goes on. They’re 4-0, but their best win is against Longwood and UVA is their toughest OOC opponent (8 of their ~12 OOC games are against teams worse than KenPom 200). They clearly put Iowa’s schedule together assuming the squad needed a lot of work to come together.

As someone who is taking this season game by game with very low expectations (nit) and only wanting to see as many minutes as possible for Igor Kadin Taine and Reece, I will still be devastated if we lose to Georgia even though they absolutely have the shooters and athletes to beat us.

Literally everyone on their team transferred out and they built an entirely new team with transfers. They shouldn’t have any chemistry whatsoever to approach our defense but at the same time it’s an intense talent infusion with the transfers. If I had expectations for this season, then there is no way I could fathom a loss to this patched up Georgia team. But because I watched our team keep the starters in for most of the 2nd half and go back and forth with one of the 30 worst teams in college basketball this season, I will not set any expectations for tomorrow lol.

Looked over the GT/Uga box score as I figure GT is a good talent comp (unfortunately) for us.

I am guessing, just from the boxscore, Uga can’t defend but can shot, plays small ball, and will try to drive and kick. In prior years a formula for an easy Hoo win, tonight…Hoo knows.

I think Hoos roll. I think this team is more likely to struggle against half decent mid majors than bad P5 programs. Half decent mid majors are typically well coached and execute on fundamentals well but aren’t very athletic. Unfortunately we don’t have the athleticism to take advantage of that. Bad P5 teams are athletic but are just poor with fundamentals and I think we can beat the hell out of that. Sorta why we lose to Navy but beat the crap out of Georgetown in a scrimmage

It’s an interesting question. I actually think Crean is pretty good at developing talent, and knows his hoops, but I don’t know how great of a coach he is otherwise. To me, UGa just seems like a worse version of us: incorporating almost an entirely new roster but with less top 100 talent. I have no idea how athletic they are. They don’t seem like the type of team that would give us an inordinate amount of trouble, but there were stretches where we couldn’t pull away from Coppin, so I don’t know what to think yet…

Crean is a mediocre coach at best. He’s got a lot of run out of getting DWade to Marquette. But other than you’re right recruited pretty well doesn’t develop. 3’s and 4’s come in and leave as basically the same talent. With as much new talent as UGa has it’s going to test Crean’s ability to pull together a squad and get them on the same page. Unfortunately UVa doesn’t have the overall talent or the execution of the scheme to just take full advantage of it just yet.

I think he’s also got OG Anunoby on his honor roll. Oladipo, too? Victor wasn’t that highly ranked headed to IU, was he? Crean’s biggest issue might be his personality. He seemed to turn off folks at IU (Kyle, who was a good kid and very diplomatic, seemed to allude to stuff) and now at UGA he lost all his young talent last year (Wheeler, Camara, etc).

Forgot about OG, Oladipo was a little under the radar. Even coming into the League I’d consider him a late bloomer over a Crean product. Crean’s personality is absolutely what holds him back. Had a friend who worked with him at Marquette, and said he was not a great person to work with. One of those people where if he didn’t think you were “important”. a manager, TV tech, lower assistant, etc. he felt he could disrespect you. UGa’s reallky been a turnstile of talent since he got there. I feel like that’s been the case at all his stops. His top talents leave early or transfer.