Virginia vs Vermont discussion board

This Tuesday, the Virginia Cavaliers will face the Vermont Catamounts. Come here to talk about the game

This one will be real test. Vermont has played in real games and real teams

We’re getting it done the same way so far. They’ve held 3 of 4 opponents under 35 FG%. Only shot 38% themselves, 21% from 3. This probably isn’t the game our young guards break the funk. Will need to grind it out.

It will not be an easy win, we’ll have to step up our offense and keep up the defense to win against a good Vermont team

Honestly, I know nothing about Vermont other than that it’s a very good place to go on vacation

My go-to resource for teams I don’t know much about is the Three Man Weave; their America East Conference (and Vermont) preview is here.

Anthony Lamb is the headliner here: above 30% usage for his entire career, he’s a power wing who does his best work around the rim (64% at the rim this year, on mostly unassisted attempts), though he hit 36% from 3 last year on a decent volume of attempts. They run the offense through him, he’s their top assist man as well as scorer. I’d be surprised if anyone besides Braxton or Mamadi defends him all night, given Lamb’s interior focus.

Stef Smith is their 2nd option; he hasn’t been hitting shots this year, but he profiles as a three-heavy off guard; he shot 37% from 3 on 164 attempts last season. Definitely Kihei’s assignment. Ryan Davis has the third highest usage rate as a 6’8" forward; he’s been effective inside and on the offensive glass.

Everyone else profiles as a complementary piece. Everett Duncan is a shooter who hasn’t hit too well this season from 3, but has got a lot of FT attempts relative to his FG attempts. Daniel Giddens notably is a big who is a formerly high-rated recruit; he transferred 2x (Ohio St., Alabama) and hasn’t been effective so far.

I’m with HGN, this will be a grinding, slow-paced game, where burying them under shot attempts (by not turning it over and by grabbing offensive boards) will be a key to victory.

Awesome preview and resource. My thoughts going into this is Braxton may be the key to this game. Sending him out to lock down Lamb all night should hopefully allow Mamadi to focus on his offense and help defense. It will also help Mamadi avoid any unnecessary foul trouble. Hopefully the chemistry we saw between Kehi and Jay on Saturday continues. It’s kind of obvious but still worth saying Jay can be an absolute X-factor if he gets rolling. There aren’t many in the country who can contain him.

Totally agree on all the assessments of Vermont so far, this is also a program that has a history of sorts of playing well in big moments and against Power 5 teams. The Hoos are going to need to lock in their fundamentals on defense and minimize second chance opportunities for their opponents.

They’re averaging 65 points per game, shooting 38% overall and 21% from the new three point line. Yeah, that’s right: they can’t shoot. Ever seen a team shooting that badly beat the packline?
And they’re small-ish. Their tallest contributor is Davis at 6’8”. Lamb, Duncan, and Duncan are all about 6’5”, and Shungu and Smith are about 6’1”. So far, they’ve played teams their size or smaller. That won’t be true tomorrow.

They also turn the ball over 13 times a game. Not a great idea against Virginia (with the possible exception of the Jay Huff and Tomas Woldetensae fast break).

But they do boast three double digit scorers in Lamb, who is the real deal, Duncan and Davis. Lamb is the one who has to be contained. He’s their leading scorer and rebounder, averaging 18 points and 10 rebounds per game. He’s also their assist leader. He’s crafty finishing around the rim and has a nice spot-up jumper, but shoots 12% from three point range this year. He’s got to get near the paint.

Another point to watch: Lamb has picked up four fouls in three of their four games so far. He makes some dumb fouls, often on charges. With Key locking him up, expect Lamb to play dumb.

Let’s be honest: a team that struggles to score 65 against Bucknell isn’t beating Virginia. Here’s a point of comparison for you: Syracuse is averaging 80 points per game against Colgate and Seattle. They scored 34 against Virginia. There is no way Vermont is getting to their scoring average against Virginia. Virginia will grind them down.

And Vermont’s defense? Go back and watch St John’s dunking all over them. They’ll have no answer for Diakite and Huff inside.

Vermont is not the toughest test Virginia has faced so far. Syracuse was – and they got blown out of their own gym.

I don’t see Vermont as a trap. I see it as a get-healthy game. A lot of Virginia’s offensive struggles are due to something you can’t see – they’re trying new things that aren’t entirely familiar. As they settle in, the shots will fall.

Tomorrow night, they start falling. My prediction? 60-35 Hoos at the 5 minute mark when the green team goes in.

Not worried at all. More like hopeful. I want Vermont to play well. Same for all the non-con opponents for that matter. We need to feel game pressure, be challenged. Winning by big margins is great for gamblers and KenPom titles, but it doesn’t do a lot to prepare for ACC play.

That’s very interesting. Wonder if Vegas expects the same back to earth performance after big road win and that we take everyone out but Lamb. Control the inside and finally hit some 3s

I expect a slightly closer, but def lower scoring game as I bet we see a lot of zone.

Man I hope I am wrong but this could be tougher / closer than we all think. Was with St Johns basketball alum and Cville native Tarik Turner today who does NCAA games on TV and he said VT is real. Lamb no secret and said the PG is real good. Will be good test early in my opinion. 55-45

In case anyone has forgotten, let’s remember to thank Vermont for their role in the painful gift. UMBC probably doesn’t make the tournament without upsetting Vermont. 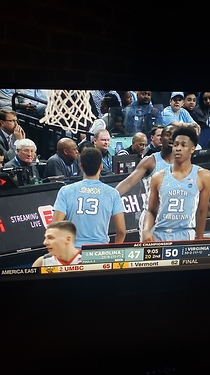 Ha. great call there. The ticket that maybe got us The Championship.

@blguthrie @DFresh11
“‘If you learn to use it right, the adversity, it will buy you a ticket to a place you couldn’t have gone any other way. I didn’t know if that meant we’d get to a Final Four or do that. I just knew that would deepen us in ways on the court, off the court and what we believe and mark us for the right stuff. And that, I think, is what took place.” -Coach Bennett at the Final Four talking about the UMBC game

Starting big. Kihei Tomas Key Mamadi Huff. Probably a heavy dose of the twin tower look w/o Kody, assuming both can stay out of foul trouble.

Really interested to watch how the Hoos guard Lamb.

Any clue what station this is on? am in NY and ACCN playing VaTech women