4:30 start Saturday. It’s another Regional Network game. Here’s the list where you can find it. 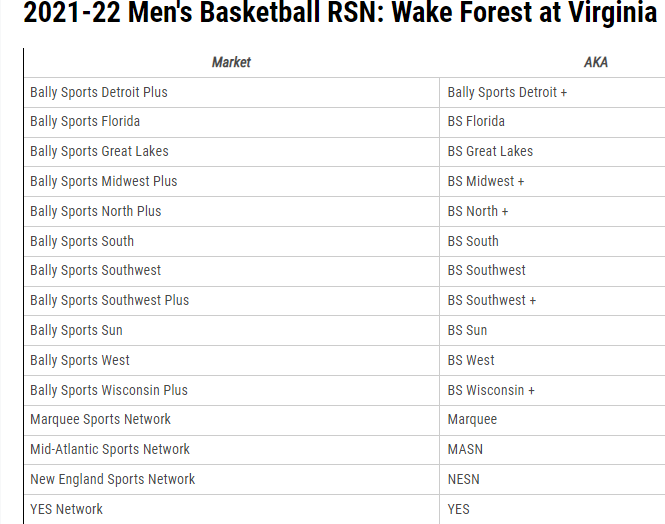 3.5 pt favorites as of now. I think that might come down a bit

Gonna be flying during the game. Last game I spent on an airplane we beat Providence by 18 and got probably our best win of the year so far. Gimme Hoos by 20

I’ve only watched a few minutes of Wake but just based on stats, seems we have some matchup issues to work through. LaRavia? Not exactly a Manek stretch 4, but not really a post player either, right? Seems like they have a tall lineup they can put together at 1-3, with a 6-8 guy at SF.

How is it a Saturday game on regional television. That ruins my day.

We have this annoying habit of having one guy play amazing so just we can get to 50. I went to all the houses of prayer this morning asking for two great performances and 65 points. I’ve done what I can folks

So you’re telling me I should bet the over?

Malachi is not a walk on. Hope he gets some run today

Start Malachi? You okay, Dragon? Little early to be hammering the booze lol

It’s a revamped roster filled with transfers. Forbes struck gold with a couple of them. Alondes Williams (20.7 PPPG) went from role player at Oklahoma to leading the ACC in scoring and assists. Everything goes through him. Guard Daivien Williamson (12.5 PPG) is in his 2nd year at Wake after following Forbes from ETSU.

Senior wing Isaiah Mucius (9.9 PPG) used be a non-shooter and now all he does is shoot threes. Forward Jake Laravis (14.8) PPG is putting up better numbers in the ACC than he did at Indiana State. And 7-footer Dallas Walton (7.9 PPG) provides some rim protection.

They play big all the time, even unorthodox lineups. Former Hokie big man Khadim Sy (7.1 PPG) is getting starter minutes lately off the bench, and it’s not really coming at Walton’s expense. They’ll go full jumbo with Laravia at the 3. There’ll be mismatches all game on both ends.

Reece on Alondes Williams will be the key matchup. They’re as dependent on him as any team in the country is on one player.

I got a feeling!!

Haha. I’m actually very happy with Armaan so long as he’s not jacking 3’s. He’s a solid player for us but I’d love to see more Taine

Papi is getting the start in place of Shedrick

Well deserved and may help Kadin with his foul issues