And also Iran will know that so they can just play for the tie and force USA to do something spectacular to win in the final 3rd against 10 guys… right?

Bunker defense sounds appealing… but there is a lot of risk… it can really backfire.

We need to beat Iran in the game and on goal differential. That last Iran goal fucked us. 90+11? Gmafb!

Naw, if we beat Iran, they’d only have 3 points and we’d have at least 4 given our tie with Wales. So we’d be fine regardless of goal differential.

They won’t know the outcome of Wales-England. The final matches within group play are played concurrently to prevent that.

Yep… similar to the last day of all the European leagues… those days are wild!

Just make sure to save our most talented player today, Gio Reyna. Save him for the big Iran match!

Gio is redshirting this World Cup to focus on scoring goals for one of the better club teams on the planet.

Baffling. So he gets 20 years total of WC play! No Gio in the starting line up tonight… 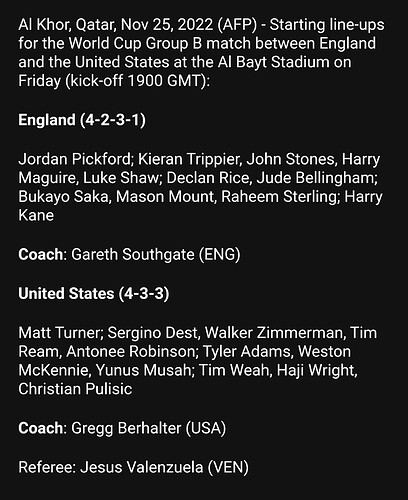 It really makes no sense. You’ve got an obviously hobbled McKennie, on a yellow, and start him anyway. Reyna and Aaranson on the bench smh

We’ll have multiple players get their second yellow tonight disqualifying them from Iran… Gio and Aaronson will definitely start then… book it. LOL!

They won’t know the outcome of Wales-England. The final matches within group play are played concurrently to prevent that.

This coach is the worst. Claudio mustve given him lotta wedgies in high school

I don’t know jack about soccer but this is gold

@talkSPORT
“For Iran it’s probably their biggest win since Iron Sheikh beat Bob Backlund at WrestleMania!” 🤣 “We have got to go beat England!” 👀 This Wales fan was left heartbroken after their 2-0 defeat to Iran! 👎 #FIFAWorldCup  #TSWorldCup https://t.co/MBidLXoHVx
7 Likes
← previous page next page →