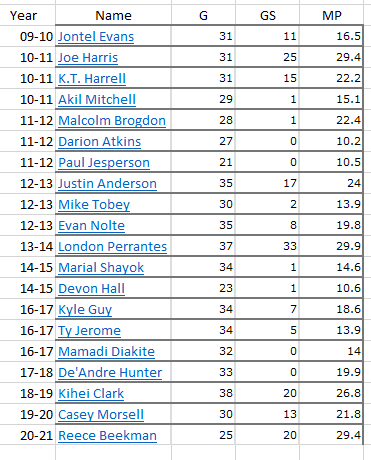 So this is on pace to be the first year since 2015-16 where a freshman won’t play at least 10 minutes per game. Interesting.

FWIW, Jack Salt was the only freshman on that 2015-16 team who saw any playing time, and his minutes actually followed a similar trend to Taine’s this season (decent minutes in OOC play, but reduced to only sporadic spurts of playing time once conference play really got going).

Thanks. Interesting stuff. Fwiw, I think the RS frosh on that list are: Hall, Diakite, and Hunter. Rumor seemed to be that the Diakite RS was something about NCAA eligibility.

Malc had an injury RS the following year. Shayok later had a transfer RS. Jesperson was attempting to RS, then Harrell transferred.

decent minutes in OOC play, but reduced to only sporadic spurts of playing time once conference play really got going

Salt was an interesting case. He would start AND get sporadic minutes for almost the whole first half of the season. There is a theory that Tony started Salt to prevent early foul trouble for Tobey. Also, IMO Tony didn’t like to play Gill and Tobey together.

One more edit - basically, Zay took Salt’s minutes and starting spot as the year went on. That and small ball with Nolte allowed Tony to keep Gill and Tobey separated.

Bennett REALLY wants to play Igor and Taine though lol I’m only half joking. Every once in a while he plugs one of them in there in the first half for a bit. He’s giving them a chance.

I think TB always prefers to have a fringe rotation player or two, man 8 and 9. Almost always underclassmen who are probably getting minutes more due to TB’s belief in their future than anything they do on the court that year. But of course they can’t be liabilities. I think right now you’re seeing him sort of stuck between with Taine and Igor.

The list of guys that went on to major contributions without being on the list above is basically Huff and Wilkins.

This year’s team has the most concentrated minutes among the fewest players in Bennett’s tenure here. And it has been trend away from earlier years through 2018 where he played 8 to 10 players a minimum of 10 min/game. And the talent level of the current guys getting all the PT is nowhere near what is was in most of the earlier years. He was much more willing to let guys get development time in the court than he is today. I think he commented earlier something to the effect that fewer scholarship players will allow for more minutes and development that may work better in this transfer era. But that’s not what he’s doing.

I think there’s what’s ideal in his mind and then how thigs work when things aren’t ideal. haha If you look at the best teams, the pattern has been the same. He has 7 guys that he completely trusts, one guard and one big off the bench basically. And then there’s the next two who play in most games, and hover around that 10 min avg on the season.

Like the national title team, Huff was the 8th man. They didn’t need Jay to play but TB wanted him to get steady minutes. The 9th guy was Marco Anthony who they clearly wanted to be a fringe rotation player giving him chances at times but he just wasn’t doing enough to keep it.

There are no names on the list of guys that were future stars after transferring because mean old Tony didn’t allow them to play as freshmen.

It’s not hard to see why the guys in the ‘19 rotation got the minutes. They were incredible and chasing a natty. That not even close to the case with this team.

I said in a separate thread I really think Bennett locks in to certain players and closes his mind after that. I think he listens to himself to the exclusion of other voices more so than in the early days. He seems to be less flexible and patient than before with the development curve. There’s nothing about his current approach that you can explain logically.

There’s nothing about his current approach that you can explain logically.

I literally just laid out a fact pattern that allows for a logical explanation, but you’d have to have your mind open to it.

In this thread? I may have missed it trying to keep up with all threads.

Can’t really be a “re-building” year when the vast majority of rotation minutes are going to guys who will not be here for the next good UVa team (which will probably not be next year).

Just worried for Beekman mostly. Super fun player, but feel like he’s going to end up with a career snakebit by poor roster construction. Been playing out of position for 2 years (somewhat better this year, but bad roster diminishing his increased chances to lead the team), and no definite pieces around him moving forward imo.

What are the ‘22 guys coming into next year? Just big gaps to fill. So maybe 23/24 will be fun if Reece sticks around and the ‘22 class hits?

Don’t mean to be a downer. Love the team, love Tony, build the statue tomorrow, etc. Hoping next year ends up being what I thought this year might be (take our lumps, but start building towards the next great Hoos squad). Spoiled for sure, but also anxious to take advantage of whatever years we have left under CTB.

I actually agree with your general point in a way but season averages are so deceiving. Like I’m looking at the '12-13 team right now, the last not to make the NCAAT. The 10th man Taylor Barnette avged almost 10 minutes, with a few DNPs. But when you actually look at box scores from competitive games late in the year, they’re riding 6-7 guys with a one or two others getting a couple minutes.

That team had 9 guys play at least 400 minutes, including Anderson, Nolte, Tobey, and Teven Jones as freshmen. Barnette (also a frosh) was 10th with 248 minutes. Those are development minutes.

The 3M’s have basically played the same minutes combined, as Stattman.

I’ve been studying that team quite a bit recently. A lot of that was situational from roster issues. Tobey was the only center, and Jones was the backup PG who played heavy minutes early in the season when Jontel was banged up… It’s also partly how Barnette’s minute totals got up there.

I do agree with your general point though. I think there was a time when TB would have force fed the freshman early in the season and given them more of an opportunity to establish themselves.

list of guys that were future stars after transferring because mean old Tony didn’t allow them to play as freshmen.

Who says future star is the bar? All three of the M’s could play, not be very good, and still be better than Stattman, with the outside chance that they might, just maybe, be good or improve.

A lot of that was situational from roster issues.

Agree, but two thoughts off this:

Also, I hate to do this, but it’s an unavoidable issue: the biggest squeeze has been SO much of Kihei and Reece together. Where would the O/U have been at the beginning of the year? 30? What is it now? 35+?

Who says future star is the bar? All three of the M’s could play, not be very good, and still be better than Stattman, with the outside chance that they might, just maybe, be good or improve.

I say it is the bar (I get to do that because I started the thread, see?).

I’ve said this before: I too wish that anybody with an M in his name got lots of minutes but, since they’re not playing much, the conclusion I draw given the evidence is not that they should be playing more. It’s that the fan base is overrating them.

Complicating factor: loss of the RS as a viable tactic (loss is strong, but it’s diminished). Tony admitted he contemplated removing Dre’s RS in 16-17. So there are instances of guys not playing who could’ve helped us, Tony considering it, and ultimately deciding against it.