Hoos pick up FSU, Wake BC and NC State and drop Pitt and GT. 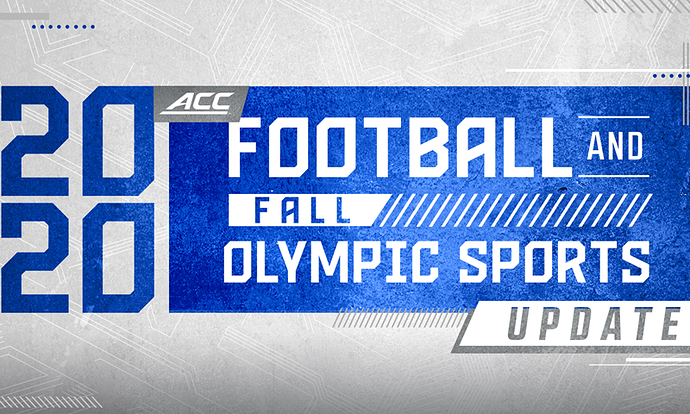 The ACC Board of Directors announced that if public health guidance allows, all seven ACC sponsored fall sports will begin competition during the week of Sept. 7-12. 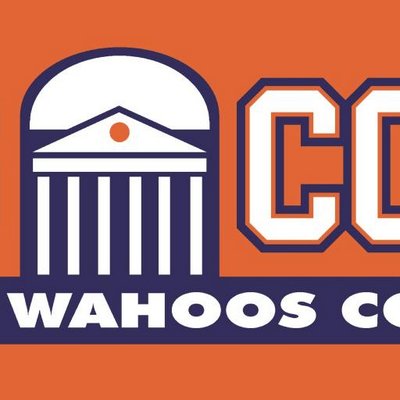 Important context from the ACC. https://t.co/kSgZ8Ij4Oi 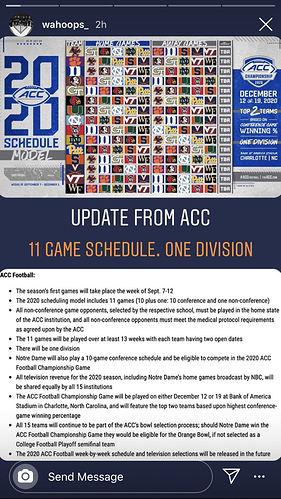 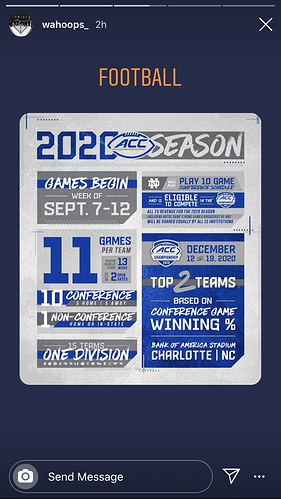 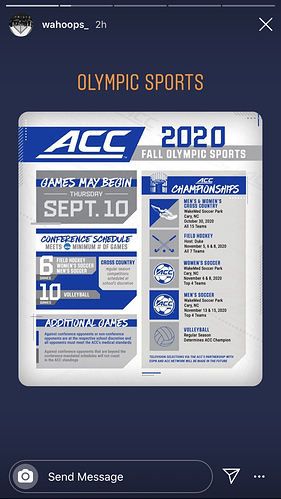 Can someone explain to me how Duke UNC and NC State all avoid playing Clemson while being in a state right above them, but not only do we travel to Clemson but to Florida TWICE

only answer i could think of is that UNC and NC State at least played Clemson last year (idk about Duke). We were set to play them this coming year anyways.

that makes sense but I thought with COVID they would want to minimize travel as much as possible. Idk

I thought that would be the idea as well. But apparently it’s not.

My question is who will be the nonconference game for the hoos. Not many Div1 options in state and FCB and other lower teams have canceled their seasons

Also if we try to convince another FBS school to come play us, their conference might not allow it either due to their own rules.

JMU or ODU would be my guess, since we are already scheduled with ODU and JMU is independent/looking for games

Those were the 2 i thought of. Maybe Liberty

No. Falwell aside, I dont trust their COVID protocol

100% agree with that. Just threw it out because im not sure what other options there are.

The team I read as a possibility was West Virginia. The team UVA plays doesnt have to be in-state . They will have to play UVA at home and have the same or very similar medical protocols

I saw WVU as well but also thought I read the acc wanted them to be in-state schools. Wvu would be great. Ive wanted that rivalry for years.

Normally, w conferences mostly being league only games, there’d be a slim chance of getting a P5 to come to Scott. BUT with the added ND revenue we should get it’s not out of the question we could offer an incentive for say a cash starved P5 to come to Scott. Of course the most likely course it the simplest one, ODU JMU VMI Liberty.

The ND rev share is going to be sweet. I imagine most other P5 are going to have similar travel restrictions etc. as the ACC which could make finding someone to come in difficult.

We were supposed to go to ODU. I’d rather keep that than pay a team to come to Scott and not make any gameday revenue.

I agree, I’d rather not pay out any money given the limited amount of income opportunities available this year. Not the time to become a big spender.

Count me as a definitively “no” for a home and home with WVU. Those of us who attended UVA’s last visit to Morgantown in ‘84, I’ve not spoken to anyone that attended the game will ever return there. Liquor bottles thrown into the UVA section, full cups of soda, threatening language, etc. I’ve been to nearly every away venue UVA has visited over the past 40 years. WVU is the worst and it is not close. A total classless bunch of ignorant hillbillies. It has been repeated to subsequent ADs that we never wanted to go back to Morgantown. Let VT/WVU take up the border war since they have Big East history. UVA & WVU have nothing in common. There is a reason the ACC has repeatedly turned down WVU seeking membership in the ACC.

ND’s annual revenue from NBC is $15.5M. The more significant benefit is to ND. If ND joined the ACC as a full member, they could earn significantly more money each season.

IMO the only way a season actually happens is if the players are in a separate dorm/hotel/bubble away from the rest of the student body. The MLB is already having to shut down certain teams and games because they aren’t in a bubble, imagine how it is going to be for college students. That doesn’t even take into account the cost of constant testing.