Happy season, everyone! We made it! 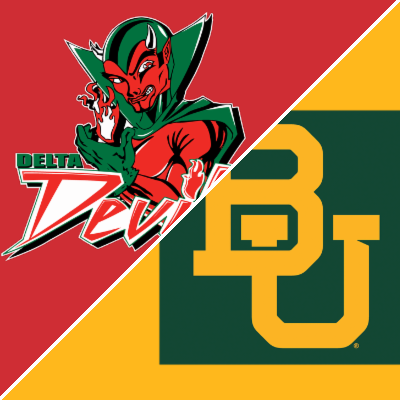 Get a summary of the Mississippi Valley State Delta Devils vs. Baylor Bears basketball game

Nah, I got rid of mine

Okay Ill rename this to your old thread

Also yeah. Baylor looks scary. Powers at be cracked my molar today so Im just chilling watching bball after a tooth extraction and Baylor looks NASTY. Its against one of the worst schools to ever play D1 bball but still.

I think Baylor or Houston wins it all this year. I don’t buy Gonzaga without actual rim protection at the 5 and I think Carolina is talented enough to get back to the Final Four but I think they’ll fall just short in the Elite Eight/Final Four to one of the two I’m favoring. I could see a case for Kentucky or Arkansas as well but I’m sticking with those first two at this point.

They need to cull D1 by about 50 programs. This team Baylor is playing has no business being D1.

I’d probably need odds to do it, but I’d feel pretty good about Baylor, Houston, and UNC vs. the field. 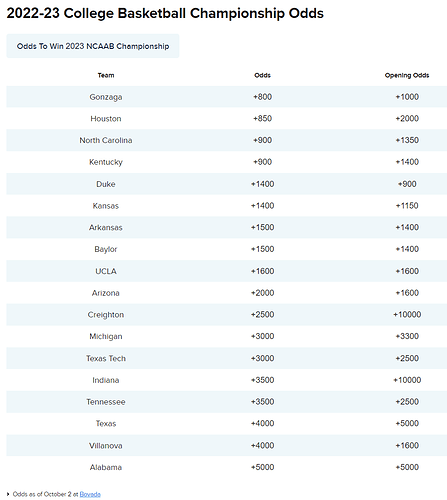 They need to cull D1 by about 50 programs. This team Baylor is playing has no business being D1.

Yeah. I still make fun of Louisville. But the two D2 team they played are better than this team.

Edit: If I was going to take a long shot from that list I think I’d take Texas. I like their roster a lot this year and I think they bounce back after a disappointing season last year.

Instead this season, we welcome several new programs to Division 1. Say hello to the…

They need to cull D1 by about 50 programs.

A range of UVA odds for comparison

Easy take the field year imo. None of the top teams are that impressive on paper

The Creighton groupthink continues! The public (and some analysts) are weirdly universal in seeing them as better than the computer rankings.

UNC’s biggest weakness is depth. One of my siblings went there, and his take is that the most likely significant player off the bench, Puff Johnson, is battling nagging injuries during the preseason and same with freshman Jalen Washington. Not a lot of excitement so far about the development of the rising sophomores either. Seth Trimble is expected to play a lot unless his shaky outside shooting is too much of a problem. Skeptical about Nickels, who is reportedly a great outside shooter, but is not strong enough yet to be a stretch 4 and is way too slow laterally to guard 3s. But, hey, they got within 10 minutes of winning the national championship last year with very little depth and UVA won one playing essentially 6 players, so who knows.

They definitely have a pretty wide range of outcomes between “Still pretty much the four starters from last year but without Manek’s volume shooting” to “title contender with more lineup versatility and depth if young guys are able to play plenty of minutes.” I’d like to think they’ll end up being the latter (especially cause of what that would mean for a stronger ACC) but I think there’s also a lot of time this season for some of those young guys to continue developing with more minutes but who knows.

Fwiw, on the transfer watch front: