When does fall begin?

Where will Tony first be reported in an open gym?

2023 Kids with offers still on the table

A saint you are @Hooandtrue

Possible note worthy 2024s (warning: These are kids who staff may never recruit. Just guesses. Also there are a million 2024 kids on their radar. I cant keep up.)

Not as well established as the other DMV wings but could have the highest ceiling of them all. This is some fantastic organization. @houston_wilson1
Big day tomorrow. Fall recruiting period begins. Coaches will be all over the place. Let’s get it !
6 Likes
AnonymooseHoo September 9, 2022, 3:47am #10

We aren’t getting anyone

Not with that attitude smh

Think Kyle Getter since the kid is from Kentucky. No idea if he can reclass to 2024 @jakeweingarten
Dayton and Northern Kentucky will be in today for 2025 prospect EJ Walker, he told @Stockrisers. Will have other schools in over the next few days as well. Michigan State recently had him for a visit. Virginia will be in Sunday, WVU & Purdue will be in next week.
1 Like
Hooandtrue September 9, 2022, 1:50pm #14 @TravisBranham_
Four-star shot-maker Davin Cosby (@Cosby10D) of @TeamLoadedBBall is expected to have Virginia, Wake Forest and Tennessee all in to see him today, he tells @247Sports. Recently locked in five officials and cut his list. twitter.com/TravisBranham_…

Davin Cosby, the No. 109 overall prospect in the 2023 class, has locked in his fifth official visit. He discussed his finalists, visit timeline and his timeframe for a decision with @247Sports. || Story: https://t.co/Giy09KzJwW https://t.co/31bBmKtZiW

Edit: wtf. Does that mean Steve Forbes was at his home at midnight?

I picture Forbes just waiting outside his window at his house in the pitch black. 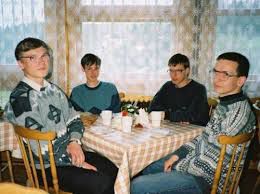 Its midnight and Wake is waiting

I laughed at that picture until I realized that I owned three of those sweaters at one time.