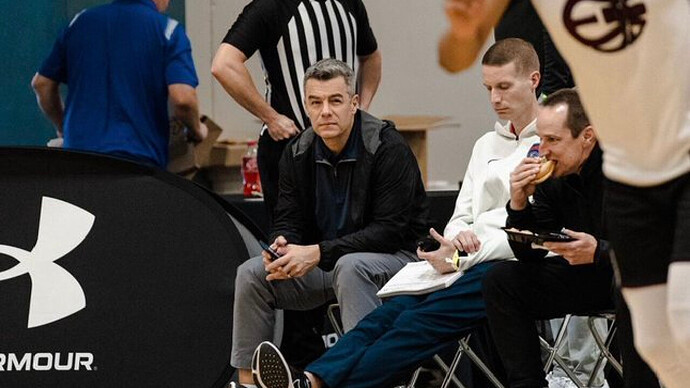 The Virginia coaching staff was back out on the road this weekend for the second spring live evaluation period.  The 2023 class is in their crosshairs.  This was their last chance to attend AAU events until July.   Head Coach Tony...

Man seeing all these other schools throwing out offers makes me jealous but at the same time I really appreciate our approach of doing a zoom visit after deliberately discussing who to offer. Makes it feel more personal and the offer doesn’t get lost in the weekend rush of offers.

After things fell apart with London Johnson, Virginia needs to find a new point guard recruit. There was a little of that going on this weekend. Honestly, not as much as I expected though.

What do you make of this?

I don’t know. We’ll see what the next few weeks brings.

I love when a chunk of the guys listed don’t have 247 composite rankings yet, even if most don’t end up being recruited, as I like when the staff goes hunting.

I expect that Kihei might be with UVA until we are all dead.

Milan Momcilovic is interesting. Incredible offensive talent but will we recruit a kid out of HS that we know will have the same defensive limitations as Hauser and Gardner with not as mobile feet? Our front court is in need of “violent” athleticism at both spots, and as we have seen we can’t get those athletic forwards in the portal due to not being able to outbid others in the NIL era. Whereas we can get Hauser, Jayden, and BVP (these skilled but not super mobile forwards) out of the portal.

Feels like our emphasis for forward recruiting out of HS should be athleticism and defensive versatility. Everyone (except for those on UVA’s roster already apparently) can hit an open 3 nowadays.

If we are to still be a team that relies on it’s defensive identity of the packline we need athletes at every spot. Like Houston, Texas Tech, and any other defensive minded team. Our best front court pairings have been Wilkins/Gill and Hunter/Mamadi.

The coach at Pewaukee High (Momcilovic and Janowski) was a Wisconsin walk on who played for Dick Bennett.

Sometimes it seems like Dick Bennett coached or knows everyone involved in the state of Wisconsin associated with basketball.

My buddy and I went to the Columbus Ohio tourney games in 2007. In between the games, we decided to go to the Columbus Y and just shoot around a bit. Got a day pass or something.

We picked up a third (random guy shooting around) and played 3-on-3 against an older gentleman, a younger kid (like 10 or so) and a guy roughly our age (we were 30, he was between 30 and 40). And those dudes SCHOOLED us. Just murdered us. They had the little kid running plays and making us look bad (not hard, to be fair). Turns out the older guy was a member of the Diener family and was sort of a big deal HS coach in Wisconsin. Nice guy. (for those who don’t remember, his son, or maybe nephew, was on staff). I think the other two were also extended family.

Anyway, I said to myself, well what can you do: Wisconsin hoops royalty.

Of course, now I know the Dieners were more like Viscounts (Bridgerton reference) compared to the Bennetts, actual WI hoops royalty. If we had played the Bennett clan? We probably would’ve gotten packlined to death. Dick Diener, a highly successful high school coach in the state of Wisconsin for over 25 years, is in his seventh year as assistant coach at Rockhurst. The father Someone track the flights

TB likes the zooms these days. Let the assistants fly around haha

He’s a guard. Much easier to hide guards in the pack line. Staple of our most successful pack lines are athletes at the 3 through 5.

Hauser and Jayden at the 4 are where the pack line have fell apart. Jayden did take leaps as an individual defender. But the pack line is a system defense predicated on help d and rotations off that help