Also for those who follow local womens basketball, Kymora Johnson (top womens recruit at STAB) is in the comments with a Go Hoos

I mean first he’s got to get offered, if he does assume he and Dillone for 1 spot. Maybe both since neither is a true pg. like the idea that he’s a long, plus defender at the 1.

@HoozGotNext Could Jaydon Young be a one? lol I dont think so but at the same time he fits the same mold as the current offers of not pgs who are transitioning to pg and are moreso bucket getters who can dish a little.

He does play pg for Greensboro day, and he lead his team to a win over Oak Hil//put the clamps on Caleb Foster. But for his aau team he plays small forward LOL (Robert Dillingham and Aden Holloway are both pgs who play the 1-2. GG Jackson is the #1 recruit and barely gets the ball lol)

His highlights from the 2nd session. (again for some reason the website isn’t popping up the instagram images and clips in the message anymore

) He’s a bully guard like Keels. Physical. Basically if Keels was a 3-4 year player. No idea if he projects as a pro but will be a damn good college player. If he’s back to 100% he’s a top 75 player

A more sculpted Keels! There’s a lot for Coach Curtis to work with.

Could Jaydon Young be a one?

Yeah I think that’s part of what he would need to prove.

LMAO how he is going to prove that on his current AAU team with Dillingham and Holloway both being point guards starting beside him? He’s been CP3 his whole life, don’t think he would switch aau teams right?

Ah that’s right the scholastic period. Forgot high schools did their thing in June and not aau teams.

Is there any chance that we could get both Dilione and Young to pair together as combo guards or are they being recruited for the same pg spot? Thanks for all the info as always HGN!

It’s possible they could get Dilione and Young. Probably not though. From what I understand, if they were to get Dilione they wouldn’t take anyone off the board. If they found another PG to recruit that’s cool. They only intend to get two guards though, and obviously Kaiser is in the plans there too. Highlights from a tournament where Jaydon Young was the MVP. Also saw he lead CP3 with 20 points in a win against Renaissaince (that new york nike aau team that had Filipowski and Barlow. The adidas NY aau team is Ryan Dunn’s team).
https://www.instagram.com/p/CYRvzEdpr7t/

@HoozGotNext isn’t this where you brush off the old post of your from like 2 years ago about Jaydon Young? lol. I remember one of the first posts from you here when I joined was about a 2023 on the staff’s radar which happened to be Jaydon Young.

This is my Jaydon Young story

It’s June 2019, the first year they had these scholastic live periods. The NC private school event was held at Greensboro Day. Of course Bennett went down to see Carson. I found that out and told people on facebook so several UVA fans showed up, got their pics with him and all that.

One fan in particular wound up seated right behind TB and Soderberg, talked with them a bit. And of course eavesdropped haha He kept texting me…hey man they keep talking about this kid Jaydon Young. Watch out for him. @TonyMcNiff2
GymRat Notes ⬇️ 2023 Forward TJ Power has a wealth of tools in his offensive skillset. Thrives as a high-post operator where he can pass, pull-up for a shot, or take it to the rim to score. Recently added offers from Stanford & Virginia. @madehoops |@thebabc |@TJPower14

@TonyMcNiff2
GymRat Notes 2023 Wing Tafara Gapare has shown off his ability to play + defend multiple positions on Day 1 of Gym Rat. Lots to like long term with his combination of size, length, & fluidity. One of the nations biggest stockrisers. @madehoops |@GapareTafara |@TeamMe7oEYBL
9 Likes
Hooandtrue May 15, 2022, 1:02pm #622

Jamie Kaiser was one of the main attractions for me coming into this event. Since watching him in Spartanburg a couple of weeks ago, his recruitment has picked up a lot of steam. Watching him at Southern Jam Fest, you can see why. The former football star has a picture-perfect jump shot with deep range and outstanding balance. He is efficient in his game and knows how t get to where he needs to make a play. In the night two nightcap, Kaiser finished with an easy 29. On to the semi-finals. 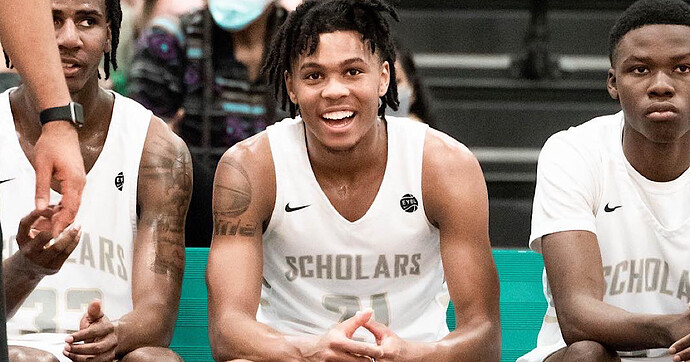 May 15, 2022 - Southern Jam fest is a staple in the recruiting/eval world. On3 was on hand to bring you the Semifinal Saturday standouts. @ColbyGHoops
‘23@NewWorldAAU Jamie Kaiser ends the evening with a 29-point outburst to help his team advance to Sunday play. Converted on 4 3’s and feasted on the offensive glass in transition. Indiana extended an offer earlier today. https://t.co/3Xie2VkCOx Stupid question: So obviously there are lots of AAU events in which college coaches can’t show up (Or at least I am assuming this, based on these reports). But do the dynamics differ from the ones where coaches are at? Can the events be filmed? Do fewer players go / do more players skip? Can private recruiting services go and essentially keep an eye on kids for coaches? If so, what’s the point of coaches staying away? Do I need to ask Condi Rice if I want that answer?

A lot of these events have streams you can pay for/coaches can watch live streams. Can’t be at events chatting up players. But there are definitely scouts and people feeding information to coaches. Like Im assuming a scout told Indiana’s staff after the first night “Yo this Jamie Kaiser kid on your radar? You gotta throw that offer out”.

Along with Ball, Gapare has been a prospect who has seen his recruitment explode this spring. From Saturday’s action, Gapare was the most intriguing prospect due to the intangibles he brings and the added confidence to his game. At 6-foot-10 Gapare has a lot of length and athleticism. He also handles it well for his size, is a capable shooter and defensively got after it blocking multiple shots at the rim. As far as his recruitment goes, he has just taken visits to Maryland and DePaul with the possibility of reclassifying up to 2022 being a very possible decision for the emerging forward.