Being Lit, Loud and More

Man I certainly hope it become deafening in here tonight. 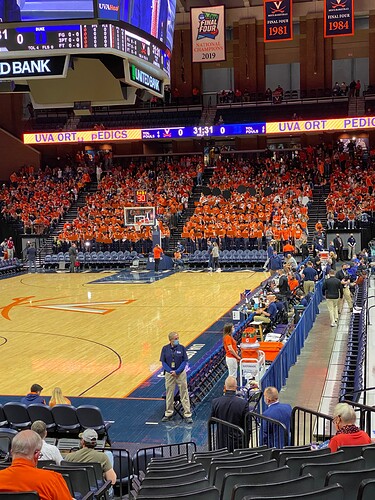 That balcony is an underrated spot.

EDIT: My bad. I didn’t even think about that being shot from your seat. Those seats are choice for sure.

perfect view for seeing the action

What’s the best JPJ crowd anyone has seen?

I’ll go with us over Syracuse to win the ACC title with Joey Hoops. Never seen such rabid excitement as that season’s build up, and to beat a top 10 Cuse team to cap it off was unreal

best JPJ crowd anyone has seen

Those are my 4, in order

2013 to beat Duke at home. Didn’t storm but watched everyone else storm. Remember heckling Mason Plumlee while he was shooting free throws pre-game. Must have worked cause we won (idk his free throw shooting percentage but I know all game he was thinkin of me and couldn’t focus on stopping Joe)

I can safely say no other human on the planet would have picked those four. Well done.

Most of my UVa hoops memories from JPJ come from the old TV box.

Crowd tonight was good, but I’ve seen better. Seats were almost completely full, so biggest crowd of the season probably, even on a weeknight.

Lack of good home Saturday games was a disappointment in this years schedule.

First game in JPJ and huge comeback win against Arizona. But best overall in either arena was Ralph against Jordan/Perkins/Worthy UNC team.

My best UHall crowds aren’t even that memorable either. For me, it’s probably the Ronald Curry game where Okulaja hit the game winner. And even that’s a downer.

In my UVa hoops era, it was mostly just cool to see the other teams play: Vince Carter, Tim Duncan (we did storm the court after beating him, once), Starbury, etc.

Just remembered mine. my last year in 93 we beat Duke at home for that years sweep (year after the were back to back NCAA champs). The crowd was unreal and the game was played well. Fans stormed the court after. We went back to the locker room and I said “yo JJ let us go back out there with the fans”. He was all about it “Hell yea. see yall tomorrow!”. TJ grabbed the mic and the party was on.

As a fan it had to be back for the UNC game I think in 95 where Deano went off and we beat UNC in UHall. High level game that featured lotta NBA talent. Crowd was insane

I’ve mentioned this game on here before, but the January '86 Carolina game when they were 21-0 and consensus No. 1 in both polls was the wildest game for me in either arena. The crowd was insane, and we beat Carolina by 13. The most memorable play was first-year Richard Morgan’s one-handed put back dunk in the second half. The roof almost came off the pregnant clam after that one.

Funny you say. I stopped Jay Williams in the back at halftime of JPJ game he was announcing. Just dapped him and said what up etc. He was walking back and stopped and yelled “yo! this arena is great but that place across the street… way tougher to play in”. To your point

I think he even said when he was playing that UHall was the toughest arena. Our crowds used to get hype for those games (of course, a couple years after I was gone).

It was funny cause I didnt know him or never met him but it was like some light went off and he had a nostalgic point to make.