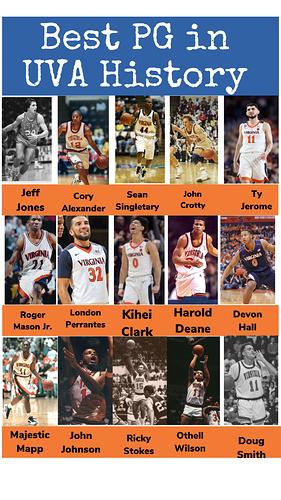 Depends on what you need imo. Need somebody to distribute and get others involved? I’m prolly going 1. Crotty 2. Ty. Need somebody who will get u a bucket? I’m going 1. singletary and then prolly Cory

This is a tough one. Pure PG that can do everything I am going Cory. Plus his foto is second best one here behind 11s

Point Guard U. 8 of those made the league…

Man that’s a tough one for me. @Merch wasn’t lying bout PG U.

I may go out of the box and say Kihei. And that’s assuming he keeps improving at his current pace. But he has every opportunity to be a 4 yr starter and the cornerstone of the greatest era in UVa history.

Cory may be the most talented and best all around player.

Sean and Roger are very emblematic of the time period and staff they played for. They almost feel out of place being UVa players.

Ty might be the sleeper of the whole bunch. The more I go back and watch his last year at UVa the I realize how under appreciated his game was.

@Merch any chance we can get a best pure bucket getter edit?

Love going outside the box but cant put Kihei with that crew personally… yet. But he does have the ring and may mess around and get 2.

Jeff Jones was the quintessential 80s PG and played with maybe the greatest player in college basketball history so his day job was very different. Othell Wilson was the one guy JJ talked about. At that time he said O was the best athlete to come through UVa. Rickey Stokes was the guy that was solid and made plays the team needed.

Crotty taught me personally how to be a PG in the ACC and in college basketball. And he was not gonna be outplayed by any 1 PG from the other team. I missed Roger and Sean but their careers speak for themselves. Dean was a Beast before that became a popular word and backed down from no one. Skills were real but not a pure guy; which didnt matter.

London maybe the calmest of the entire crew who kept all of us on the edge of our seats but always came through when it mattered. Always. Devon was just a complete pleasure… he did his thing and kept surprising me with big play after big play.

Back to CA. After competing with him day after day for 2 years I finally realised that he was THE point guard that everyone wanted to be in my era. If anyone wants to point out a basketball weakness from C I can easily break down that he had none. His most underrated quality was his knowledge of the game. Knew where everyone should be and what everyone needed to be doing at all times. Also sneaky fact he was, like Jeff Jones, a psychology major.

shit I forgot my favorite PG from Virginia as a fan Tyrone Jerome. There is nothing I can add to what we already know. Complete killer and mad skills. Have never seen anyone in college know angles like this dude. And ability to make plays when needed BIG plays unparalleled. He may prove to be the best ever one day and also my only hope to have 11 retired in JPJ

bucket getter has to be stith

Love the assessment. I’m neing very bullish with Kihei and banking on a 2nd Final 4 and maybe a ring. Even then he enters that "great player or great system " argument.

Idk @brogdonfanpage. Crotty was a scorer in college.

London ia a guy I have a hard time classifying. He was a great roleguy for so many years. But his 4th year he got to shine and he let it rip.

Ty Jerome , that list was packed with great players. When I’m not sure I’m going with the team that brought us the Championship

cant argue. Ty controlled every game his last two years. Never got sped up or slowed down. But I am staying with my guy CA because of the foto

Crotty all day and two times on Sunday.

ha. and proly frequented your namesake

Loved Crotty but cant get him higher than 4th.